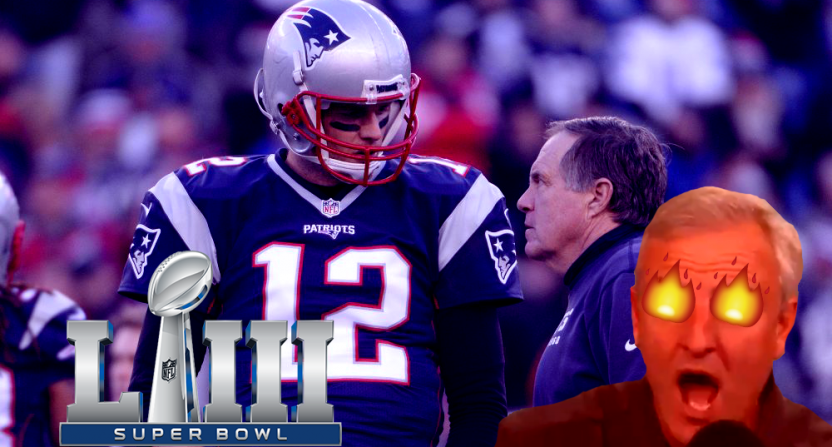 That’s not an opinion. And it’s not meant as an attack. It’s a statement of fact. It doesn’t mean New England Patriots fans shouldn’t be happy with their win. It doesn’t mean Los Angeles Rams fans (all 387 of them) shouldn’t be upset about what could have been. All of that is still valid. It’s just that the game itself was bad football and painful to watch.

I’m not one to blame millennials for their effect on society but, as a Gen-Xer, I suppose I can say that millennials have ruined the boring Super Bowl.

Meanwhile, we’ve been blessed with a pretty solid run of Super Bowl performances in the past decade. Aside from the Seahawks’ blowout of the Broncos in XLVIII, every big game since 2003 has been a competitive contest headed into the 4th quarter. We’ve seen some of the greatest finishes in Super Bowl history in the last decade (XLII, XLVI, XLIX, LI). The idea of a Super Bowl snoozer is foreign to entire generations of football fans. It would be true to say we’ve all gotten accustomed to the idea that the Super Bowl will, inherently, be good.

All the more reason Super Bowl LIII stood out for its putridness and banality.

However, Sunday evening’s universal sense that this was a gigantic waste of America’s time gave way to a backlash by Monday morning. Actually, it was two simultaneous backlashes crashing together at once.

First, the “let’s give the Patriots their due” backlash that tsk-tsked anyone who was bashing Boston’s football empire for the latest round of inevitability. Had any other franchise won a game this bad, there would have at least been a saving grace of seeing something new. But to watch Brady, Belichick, and Kraft hoist the trophy again only drove home the emptiness of the entire exercise for so many. Whereas it was commonplace in year’s past for everyone to launch disdain in New England’s general direction, we’ve reached the point in the dynasty where we’re being told that we have no choice but to honor and respect the Pats for what they’ve accomplished.

It’s a smug reaction because it assumes the people launching disgust at New England don’t respect what they’ve done over the past 18 years. They do respect it, and that’s the point. They respect the Patriots enough to know they can be as mean as they like because it won’t matter. Tom Brady doesn’t care about our insults, nor should he. They’ve won and all we have left it the ability to toss smarm grenades in their general direction.

Deadspin was front and center in this backlash as the top of Monday’s front page was a showcase to Patriots hatred. It was not only business as usual for Deadspin but also something of a counteroffensive the lovefest happening over at The Ringer. Drew Magary did his usual thing, dunking on everyone who might be happy that the New England Patriots won another Super Bowl. The same kind of thing he does before every NFL season for every team and the same kind of thing he does at the end of every season when the Vikings don’t win the Super Bowl. This time, however, it was deemed sour grapes.

The second backlash was more specific to the game-watching experience. Whereas everyone had been universal in their lack of enjoyment for Sunday’s festivities, especially the halftime show, a notion arose on Monday that by airing your grievances about the game you were besmirching…something. Some had been besmirched. There was a besmirchment afoot.

The loudest voice opposing the notion came from a curious ESPN source. Trey Wingo, of all people.

“SHUT THE HELL UP!”@wingoz on the fans who complained for 4 hours, but wouldn’t stop watching the Super Bowl.

“YOU PEOPLE ARE THE WORST!” pic.twitter.com/xJzQqCSRnT

“Shut up! Just shut up. If you don’t want to watch, then don’t watch! Go watch the Raptors and the Knicks. Go do something else. But don’t sit there for four flippin’ hours with your eyes glued to the game and say, ‘Oh, this is so boring, but I can’t stop watching.’ … Just shut the hell up! I mean, give me a break. If you don’t want to watch it, then don’t watch it! But don’t watch the game and sit there and go, ‘I hate it.’ That’s the worst. And you people who did that, you’re the worst! The absolute worst.”

First of all, easy slugger.

Second of all, did Trey Wingo accidentally pick up the #HotTakes notes meant for First Take on his way into the studio?

Third of all, sorry Trey, but everyone has the right to hate-watch the Super Bowl if they want.

We live in the golden age of the hate-watch. Reality TV was practically created for hate-watching. Prestige TV begat Bad Prestige TV which has been the world’s leading source of hate-watching for five years now. We find something we love and we adore it (Game of Thrones, Mad Men, Breaking Bad). Then when something tries to emulate them but fails, we adore trashing them for even trying (House of Cards, True Detective S2, Marco Polo). It’s part of how we process this deluge of entertainment. We’re so inundated with choices now that to commit to anything, even if it’s bad, requires you to make it worthwhile.

Each day on twitter there is one main character. The goal is to never be it

Anyone who has ever spent time on social media will understand that heaping scorn and trash onto whoever had the misfortune to do something dumb that day is part of the process. Consciously or subconsciously, we know it’s all a giant waste of time. So we might as well get our frustration out on the punching bag in front of us.

So when it comes to the Super Bowl, at a time when so many of these games have been enjoyable for the most part, there’s nothing wrong with complaining about the fact that you just sat through five hours of the most boring football game you’ve ever watched. No one was complaining last year when the Eagles took down the Patriots late (except Pats fans). No one was complaining two years ago when the Patriots and Falcons went to overtime (except Falcons fans).

We’ve earned the right to be crabasses about the Super Bowl sucking. The game is shoved down our throats every year. We’re told that we’re not real football fans if we don’t watch. Or that it’s an American tradition. And that you have to eat X, Y, Z or you’re not doing the Super Bowl right. Everyone makes a really big deal out of commercials (COMMERCIALS!). It’s beaten into everyone’s head that the Super Bowl is important and required.

So if it sucks, we get to complain about it. We’re not complaining that the players didn’t try. No one thinks Jared Goff went out there to purposefully have a bad game. We know everyone put their hearts into it. But just like when we watch a bad movie or dunk on a dumb President who’ll never see our tweets anyway, it’s our release to say out loud that this is not an enjoyable experience even if we’re still choosing to experience it. That’s how we get through the day.

So, sorry, Trey Wingo. The Super Bowl sucked. And it’s okay to say that it sucked. Hopefully, it won’t suck next year. And if it doesn’t, we’ll all go home happy. But if not, we reserve the right to complain. If we can’t get catharsis on the field, we’ll make it for ourselves.