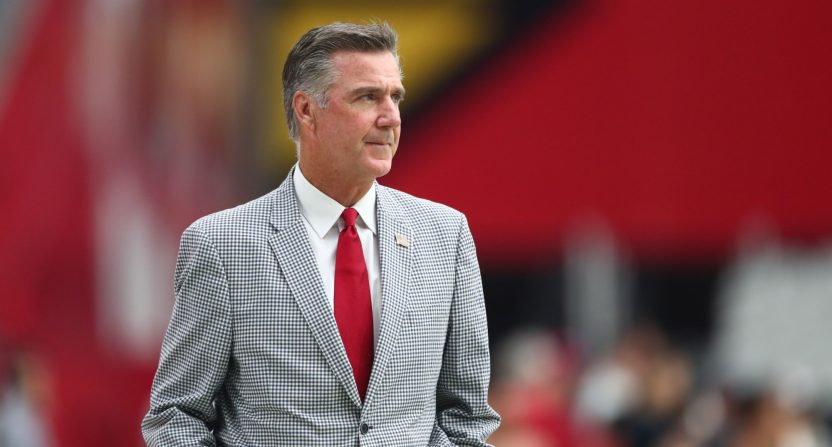 It’s been more than a year since Jon Gruden resigned as head coach of the Las Vegas Raiders. That resignation came after publication of his emails to Washington president Bruce Allen (during Gruden’s time as an ESPN analyst) by The Wall Street Journal and The New York Times. But that email saga still has a lot of potential fallout to come, including with Gruden’s lawsuit against the NFL and commissioner Roger Goodell. And some more of that fallout showed up Thursday.

Perhaps the most notable new revelation from the 78-page House Oversight Committee report on the Commanders was its inclusion of Allen’s testimony. There, Allen (seen above on the sidelines during a 2018 game) said he was told by NFL senior vice president and special counsel for investigations Lisa Friel that someone on the Washington team’s side leaked those emails:

Three notes of interest — one newsworthy, two more of a personal nature — from today’s Dan Snyder/NFL report and document release by House Oversight.
1: Bruce Allen testified that the NFL’s investigations chief told him the Commanders leaked his emails with Jon Gruden pic.twitter.com/vIk0kfEMxc

Congress issued a 79-page report into Dan Snyder and the Commanders.

If you’re looking for the bombshell it’s on Page 42. The report states that the Washington Commanders leaked the Jon Gruden emails that resulted in his resignation. “It came out of their side.” pic.twitter.com/TYLoASmhYP

A transcription of the key part of Hobson’s tweet there:

“I said ‘Well, who the hell is giving my emails to The Wall Street Journal? Why don’t I–I’m the only person that doesn’t have my own emails. Why?’ And she went on to say ‘Well, we didn’t do it at the league office. It came out of their side.’ And she said, ‘You know, you don’t look good with this.'”

Just because Allen said something, even in sworn testimony, doesn’t mean that’s the entire and undisputed truth. Allen’s comments here may not be an exact quote of the investigator, especially with this testimony taking place long after this conversation. It’s also possible that Allen is relaying that conversation entirely accurately, but the investigator was wrong about who leaked the emails. But even with those considerations, this is still a notable development for Gruden, Allen, the Commanders, and possibly even under-pressure owner Dan Snyder. And it could impact Gruden’s lawsuit, which claims those leaks came from the NFL office rather than the Commanders.

It’s also interesting to note that the Republican (minority) side of this committee came out with their own report. And that report casts a lot of blame on Allen, and says the full committee didn’t investigate him enough. And it includes yet more emails:

Here’s the full quote from the Republican response, a copy of which PFT has obtained: “A scrupulous investigation which seeks to ‘fully understand this workplace conduct’ would have required Committee Democrats to investigate the conduct of the Team President and General Manager, Bruce Allen, because he was in leadership during the height of the alleged misconduct. Unfortunately, when Committee Democrats had the opportunity to ask Allen questions on September 6, 2022, under subpoena, they failed to address any of the racist, misogynistic, homophobic, or otherwise incredibly offensive emails sent to and from Allen’s work account. Allen’s participation in, and perpetuation of, a hostile work environment at the Team cannot be ignored. If the Committee Democrats’ investigation was indeed about the Team’s workplace misconduct, how could it ignore the conduct of one of the Team’s top executives? It again raises the bigger question, why did Committee Democrats spend such vast amounts of time, effort, and resources investigating a professional football team? Considering Committee Democrats’ failure to address obvious workplace misconduct of the Team President and General Manager, we are attaching 57 emails and documents sent outside the organization to highlight the obvious failure of Committee Democrats’ investigation to be full and complete. These emails show that under Allen’s leadership there was a toxic workplace — one that has since been reformed based on independent third-party reviews of the team’s culture. Committee Democrats have not identified or presented any similar emails or documents identifying any racist, misogynistic, or homophobic behavior from Dan Snyder.”

Attached to the report are many emails. Several of them were leaked to the media in October 2021, resulting in the forced resignation of then-Raiders coach Jon Gruden. The emails attached to the GOP report also include Allen sending photos of naked women to Gruden and others, including Outback Bowl president/CEO Jim McVay, the uncle of Rams coach Sean McVay.

The overriding objective of the Republican members of the Committee seems to be to argue that Allen was the problem, not Snyder, and that the Committee didn’t spend enough time investigating Allen, because it was focused on taking down Snyder.

Allen was fired by Washington after the 2019 season and hasn’t worked in the NFL since. But the further releases of his emails here certainly don’t look great for him, and they suggest it’s unlikely he’ll return to the league any time soon. The further email releases also create more problems for the idea of Gruden of ever returning to the NFL as a coach or commentator, and they potentially create problems for Jim McVay as well. And this whole situation will be interesting to watch.