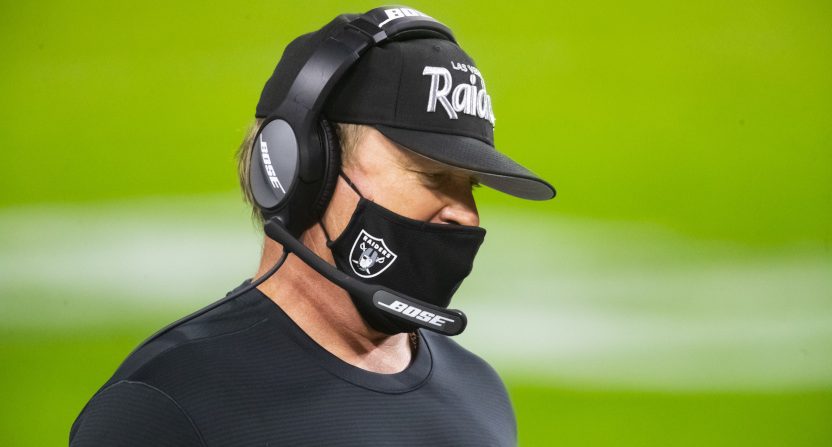 Earlier Monday, ESPN’s Adam Schefter reported that the NFL had sent the Las Vegas Raiders further past emails from current Raiders’ head coach Jon Gruden to review, and that he believed the new emails were “damaging.” Considering that this was in addition to the first email of “Dumboriss Smith has lips the size of michellin tires,” it seemed likely those were pretty significant. And as per a report from Ken Belson and Katherine Rosman in The New York Times, who reviewed the emails, those other emails include a lot of homophobic slurs and misogynistic comments.

Those emails were sent while Gruden (seen above during a game last November) was working at ESPN, but they were from his personal email account. Many of them were to a group including then-Washington GM Bruce Allen (who Gruden sent the Smith email), Hooters’ co-founder Ed Droste, past Outback Bowl exec Jim McVay (John McVay‘s son and Sean McVay‘s uncle), and PDQ Restaurants founder Nick Reader. A few excerpts of the Times‘ discussion of those emails (all censorship below is our own, not in the original emails or in the Times report):

In the emails, Gruden called the league’s commissioner, Roger Goodell, a “f***ot” and a “clueless anti football p*ssy” and said that Goodell should not have pressured Jeff Fisher, then the coach of the Rams, to draft “queers,” a reference to Michael Sam, a gay player chosen by the team in 2014.

…In numerous emails during a seven-year period ending in early 2018, Gruden criticized Goodell and the league for trying to reduce concussions and said that Eric Reid, a player who had demonstrated during the playing of the national anthem, should be fired. In several instances, Gruden used a homophobic slur to refer to Goodell and offensive language to describe some N.F.L. owners, coaches and journalists who cover the league.

…Gruden exchanged emails with Allen and other men that included photos of women wearing only bikini bottoms, including one photo of two Washington team cheerleaders.

…Gruden also criticized President Obama during his re-election campaign in 2012, as well as then-vice president Joe Biden, whom Gruden called a “nervous clueless p*ssy.” He used similar words to describe Goodell and DeMaurice Smith, the executive director of the N.F.L. Players Association.

…In one email from 2015 that includes Droste, McVay and others, Gruden crudely asked Allen to tell Bryan Glazer, whose family owns the Tampa Bay Buccaneers where Gruden coached until 2008, to perform oral sex on him. Allen said Glazer would “take you up on that offer.”

Allen and Gruden also mocked Caitlyn Jenner, who received an award from ESPN in 2015 after she transitioned.

In an email from 2015, Allen and Gruden criticized a congressional bill that aimed to force the Washington franchise to change its name, which some Native Americans and others have denounced as a slur. Again using a vulgar term, Gruden took aim at Goodell and his staff even though the commissioner had initially defended the team’s right to keep the name.

In 2017, Droste shared with the group a sexist meme of a female referee to which Gruden replied, “Nice job roger.”

A notable element of this is that these emails might have never come to light if not for the NFL’s investigation of the Washington franchise (which led to a $10 million fine and enhanced reporting requirements), which included combing through countless emails there around workplace culture following investigations by the Washington Post and others into sexual harassment there. (It’s interesting that one of these emails involved photos of Washington cheerleaders, as the Times ran a story in 2018 on numerous accusations from Washington cheerleaders, including that sponsors and suiteholders were invited to watch their topless photo shoot; it’s certainly notable that Gruden, Allen, and others in this group were sharing cheerleader photos.) Gruden’s actions here were from his personal email, not his ESPN email. But the involvement of Allen led to this getting uncovered in this NFL investigation, and that’s now put even more pressure on Gruden.