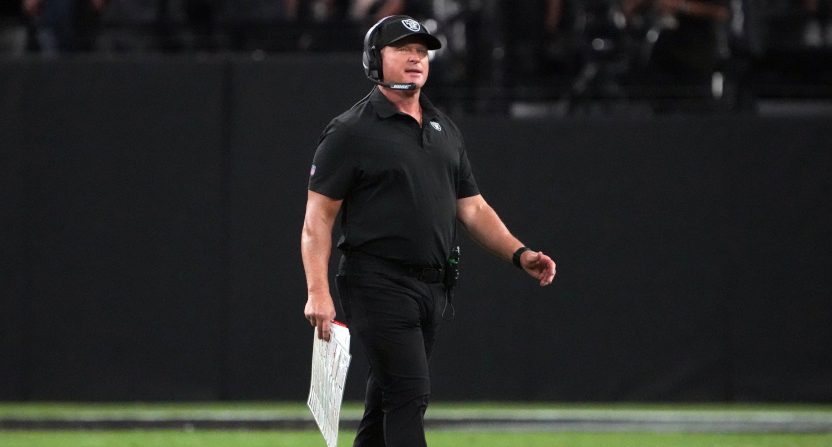 The situation around Jon Gruden’s 2011 email of “Dumboriss Smith has lips the size of michellin tires” has now expanded further. That email came up during the NFL’s review of the Washington Football Team, and was released to the public Friday by Andrew Beaton of The Wall Street Journal. Gruden, currently the head coach of the Las Vegas Raiders (he’s seen above on the field during their loss to the Chicago Bears Thursday), has tried several “I’m not a racist” apologies around it, but there still have been many people calling for his job. And ESPN’s Adam Schefter reported Monday that the league is sending more Gruden emails to the Raiders for review:

The NFL sent the Raiders additional Jon Gruden emails to review on top of the negative one that surfaced last week and, per sources around the league, the NFL is actively monitoring the situation and waiting to see how the team will handle the matter.

Schefter said on ESPN’s Monday Night Countdown he believes these emails are “damaging”:

“These are additional emails, and my sense is, my sense is, these are damaging emails. And so, if we already have some of the emails that we’ve heard about in where there were racial remarks that were offensive to people that were made, and there were disparaging remarks about the commissioner, which is at a much lower level but still tasteless in many ways…now, there are more emails, with more disturbing things said.”

ESPN analyst Booger McFarland then urged Raiders’ owner Mark Davis to “do something” to live up to the NFL’s past comments about stopping racism:

“Stop hate. Black lives matter. Words without substance mean nothing, Suzy. They mean nothing. So the substance has to be done by Mark Davis. And his dad set a great example. Al Davis was at the forefront. He hired Art Shell. You talk about some of the people that Al Davis employed, as a Black man. Mark Davis, maybe he didn’t learn anything. But everybody’s watching right now, and they’re watching what Mark Davis does, and he’s got to come to the carpet and do something. And it sounds like it’s going to get worse based on the emails.”

We’ll see what’s in these additional emails, and what, if anything, that leads to for Gruden.