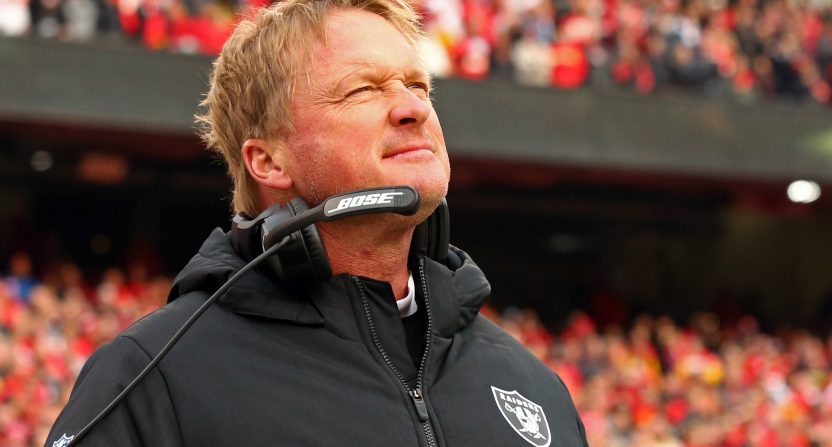 The sweeping NFL investigation into Washington Football Team workplace misconduct (following The Washington Post ‘s reporting on numerous issues of sexual harassment by executives against people inside and outside that organization) wrapped up this summer with a $10 million fine for the team and further reporting requirements for the organization. But the league also said then they were “informed of the existence of emails that raised issues beyond the scope of that investigation.” And one of those issues, centered around a July 21, 2011 email then-ESPN analyst Jon Gruden sent to then-Washington general manager Bruce Allen about NFLPA executive director DeMaurice Smith, just came to light in a bombshell report from Andrew Beaton of The Wall Street Journal:

Jon Gruden—the current Las Vegas Raiders coach who has been one of the most prominent figures in the NFL over the past two decades—sent an email about DeMaurice Smith, the executive director of the NFL Players Association, to a team executive. Gruden’s email described Smith with a racist trope common in anti-Black imagery.

“Dumboriss Smith has lips the size of michellin tires,” he wrote in the email reviewed by The Wall Street Journal.

That certainly seems to be referencing that trope. Gruden claimed to Beaton that wasn’t what he meant, though:

In an interview, Gruden said he can’t specifically recall writing the email but apologized for using that language.

…Gruden said he had been angry at the time because of the lockout and didn’t trust the direction the players, led by Smith, were going in the negotiations. He said he has in the past referred to people he believes to be lying as “rubber lips” and that he took it “too far.”

“I was upset,” Gruden said. “I used a horrible way of explaining it.”

Gruden said something similar to Vic Tafur of The Athletic, taking accountability for the emails.

Just talked to Jon Gruden. He doesn't remember the emails but "certainly I will take accountability for it if it was on my email." Said he was upset about the lockout and that he refers to liars as having "rubber lips." He has reached out to Smith to apologize.

It seems a little hard to believe that Gruden wasn’t at all aware of that trope, and that his comments just happened to land on a racist trope accidentally. Regardless of what led to that comment, though, it may cause some problems for him.

NFL statement: “The email from Jon Gruden denigrating DeMaurice Smith is appalling, abhorrent and wholly contrary to the NFL’s values. We condemn the statement and regret any harm that its publication may inflict on Mr. Smith or anyone else.” https://t.co/b9IUku9saH

Beaton’s also piece notes that the league is reviewing Gruden’s status with the Raiders for potential discipline.

The team said that Gruden’s comment is “not what the Raiders stand for,” and that they are “addressing the matter with Coach Gruden.”

Another interesting element of this is the ESPN factor. Gruden is obviously no longer an ESPN employee, but it’s remarkable that he would feel comfortable making these kinds of remarks about the head of a union to a team general manager, and particularly doing so over email. Yes, Gruden had known Allen for a long while at this point, and they’d worked together with both the Raiders and Buccaneers. And it’s not that surprising that they’d continue to talk while one was a broadcaster and one was a team executive.

But it is amazing that Gruden felt comfortable enough at ESPN to insult the NFLPA executive director (in any way, but especially in a way tied to a racist trope) in a permanent e-mail to someone working for an organization Gruden (seen above with the Raiders in 2018) would be covering on the air. (This is also the second time in the last year-plus that ESPN has looked bad as a result of comments made by one of their employees to an outside party they cover.)

As for Smith, he had a strong statement to the Journal:

“This is not the first racist comment that I’ve heard and it probably will not be the last. This is a thick skin job for someone with dark skin, just like it always has been for many people who look like me and work in corporate America. You know people are sometimes saying things behind your back that are racist just like you see people talk and write about you using thinly coded and racist language.”

“Racism like this comes from the fact that I’m at the same table as they are and they don’t think someone who looks like me belongs. I’m sorry my family has to see something like this but I would rather they know. I will not let it define me.”

Many have asked me on @twitter and otherwise my thoughts about Jon’s e mail – I don’t have time to reply to all inquiries, so rather than reply to only some, I will instead share my thoughts here: heinous, horrific, horrible, hideous and heartbreaking. https://t.co/GfrwDKNTpn

We’ll see what, if any, punishment comes for Gruden as a result of this.