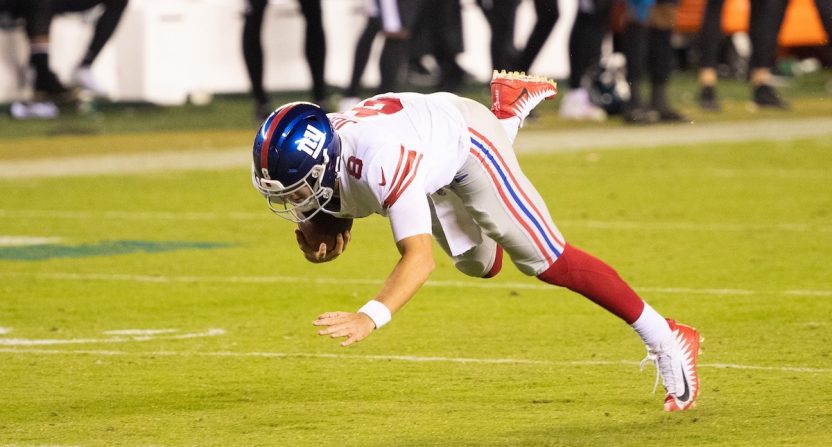 Week 7’s Thursday Night Football game appeared to be a lackluster matchup between the Philadelphia Eagles and New York Giants. The outcome turned out to be a thrilling one, with the Eagles winning on a last-minute touchdown catch by Boston Scott.

But the game also provided a memorable moment with an 80-yard run by Giants quarterback Daniel Jones. The dash likely would’ve ended with a touchdown had Jones not stumbled with approximately 20 yards left to run. It was an amusing finish to a spectacular play, leaving those who called the play to laugh at Jones tripping on that Lincoln Financial Field grass.

(Did anyone miss Chris Berman here? Or Keith Jackson? If any play needed a “rumblin’, bumblin’, stumblin'” call, it was this one.)

On Fox’s TNF telecast, it was Troy Aikman who chuckled while narrating the replay, marveling that Jones effectively tackled himself with no Eagles defenders near him and nothing obstructing his path to the endzone. But that wasn’t the only broadcast for the game.

The all-seeing Timothy Burke also captured three other calls of Jones’ run. First is Ian Eagle on Westwood One’s Thursday Night Football broadcast, who kept it together on the play-by-play. However, analyst Ross Tucker couldn’t maintain the same composure once Jones stumbled.

Then there was the Giants’ home radio call from Bob Papa and Carl Banks. Papa chuckled at the end of the play, while Banks started laughing, saying the “turf monster” got Jones (as Aikman did on the Fox telecast) and referencing Berman’s “rumblin’, bumblin’, stumblin'” call.

But the most enjoyable call may have come from the Fox Deportes telecast with play-by-play announcer Adrian Garcia-Marquez and analyst Rolando Cantu.

Garcia-Marquez’s “No!” when Jones fell, followed by Cantu’s laugh made the point, regardless of whether or not you understand Spanish.

This is why most any sporting event, regardless of appearances, is worth tuning in for — whether on TV or radio, in English or Spanish — right? There’s always the potential for a memorable play, made even more so by entertaining play-by-play calls and commentary. Good job, everyone. (Or buen trabajo a todos.)

[Correction: A previous version of this post stated that Tony Boselli was the analyst on the Westwood One Radio call, not Ross Tucker.]