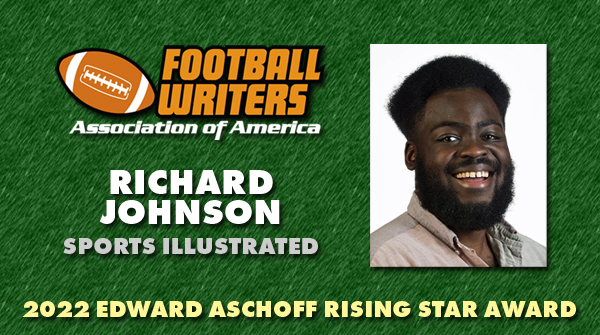 ESPN college football reporter Edward Aschoff suddenly passed away at 34 in December 2019 after battling pneumonia and non-Hodgkins lymphoma, but his memory lives on throughout the college football world. Several different awards and scholarships have been set up to honor Aschoff, including a memorial fund for scholarships for journalism students at his alma mater of Florida, a communications internship at the SEC (conference, not governmental agency), and the Football Writers’ Association of America‘s Edward Aschoff Rising Star Award, given annually to “one promising journalist no older than 34, who has not only the talent and work ethic it takes to succeed in this business, but also the passion to make it better.” The FWAA announced the third winner of that award Friday, selecting Richard Johnson of Sports Illustrated, SEC Network, and the Split Zone Duo podcast.

Johnson started his media career at ESPN in 2015, then went to SB Nation for four years and was part of college football vertical Banner Society there. Around the Vox furloughs and layoffs in 2020, which hit their college football coverage particularly hard, he teamed with fellow Vox writers Spencer Hall, Jason Kirk, and Alex Kirshner and illustrator Tyson Whiting for the Sinful Seven: Sci-Fi Western Legends of the NCAA ebook and also partnered with those writers for the Moon Crew newsletter.  He and Hall joined a revamped version of SEC Network’s Thinking Out Loud in September 2020, and he’s been contributing to SEC Network in various roles since then, including filling in for Paul Finebaum. He has been doing the Split Zone Duo podcast with Kirshner and fellow SB Nation alum Steven Godfrey since September 2020, and joined Sports Illustrated last year as well. He follows past winners David Ubben (then doing Tennessee coverage for The Athletic, now doing general college football coverage for them) and Grace Raynor (Clemson coverage for The Athletic). Here’s more on Johnson’s selection from the FWAA release:

…“Richard’s writing in particular is a combination of what makes all the best people in this business, “Ubben said. “It’s informative, well-reported and entertaining. And his television and podcast work has made him a breath of fresh air in a business where some can get stale. His work always includes interesting perspective and anyone who reads something from Richard will finish it having learned something.

“The people who can do that consistently are growing rare. I couldn’t be happier that Richard won this award. He’s everything right about sports writing and makes me so excited about the future.”

…“Outside of the fact that he knew Ed and looked up to him, RJ has been growing as a writer on our staff, in addition to his continuing SEC Network duties,” said Sports Illustrated Executive Editor Joy Russo in nominating Johnson for the award. “…He has been determined to expand his sourcing profile across the sport, but has also been committed to covering race and inequities within football – the latter has been newer territory for him within the sport, but he’s been dedicated to finding more stories to tell there.”

That release also noted that Johnson has a personal connection to Aschoff, and one that goes beyond just sharing an alma mater:

Johnson, a University of Florida alum like Aschoff, knew Ed personally. The two actually spent time together, most recently in the spring of 2018 when they were reporting stories at Arizona State at the same time. They went to a Phoenix Suns game together.

“I remember when the FWAA announced this award a couple years ago,” Johnson said. “I immediately knew that I wanted to win it, and I guess it’s time to move past my jealousy of past winners David and Grace – I kid as they’re both great reporters who I’ve had the pleasure of meeting on the road the last few years.

“Ed is a prime example of how representation matters,” Johnson added. “There are unfortunately too few Black people covering this sport, and for as long as I’d known him, seeing Ed on television or his byline on the website was proof positive that he’d made it in this industry and that I could too. You could say I basically followed his blueprint from UF’s journalism school to covering the Gators all the way to ESPN, and it was an honor to shout him out during my first season on the SEC Network.”

It's really hard to put into words how much this means. This is Ed's legacy, and I'm honored to play a part in it. Thank you to @TheFWAA. https://t.co/9rSlDphyMg

Johnson has certainly had a remarkable run in covering college football to this point, and he’s a very deserving recipient of this award. And it’s good to see Aschoff’s legacy continue with this annual award.