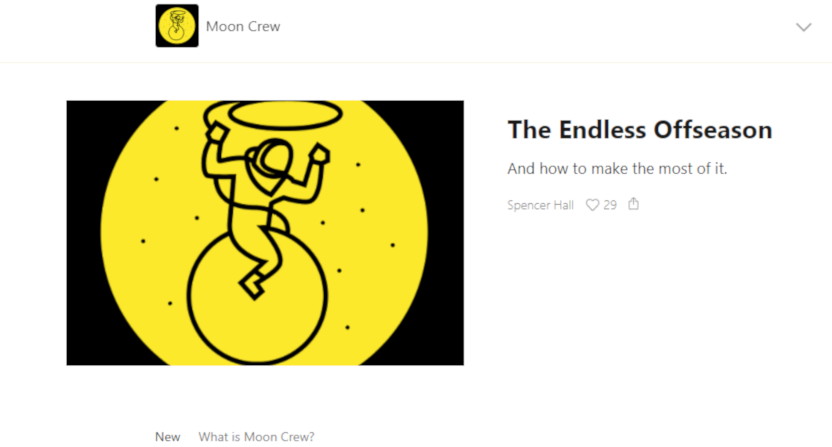 While there have been plenty of layoffs and furloughs across sports media outlets this year thanks at least in part to economic impacts from the COVID-19 pandemic, the Vox Media ones stand out as particularly dumb. In April, Vox Media decided to focus their furloughs (which hit nine percent of their overall staff) on “revenue areas where short-term demand will be lower,” which they somehow twisted to include sports despite large demand for good sportswriting even without live games. That led to the departures of countless talented writers from sports site SB Nation and separate college football site Banner Society (either during the furloughs or later, when they did not in fact get their jobs back), and to furloughed/laid off/bought out writers and editors Spencer Hall, Jason Kirk, Richard Johnson and Alex Kirshner (all at Banner Society at the time of the furloughs, but at SB Nation before that) creating a “Sinful Seven: Western Legends of the NCAA” ebook with illustrator Tyson Whiting (a book which is really good, and worth your time). And now, it’s led to Hall, Kirk, Johnson and Kirshner launching a new, free, donation-supported newsletter, “Moon Crew,” with a logo from Whiting. Here’s more from their about page:

You might know us from such products as the Sinful Seven, the Shutdown Fullcast, Podcast Ain’t Played Nobody, EDSBS, SB Nation, Banner Society, and so forth.

Now, here’s our free newsletter that’ll probably usually revolve somewhat around college football’s internet culture, but not always. We aim to publish a couple times a week on all sorts of topics.

We are also helping to bring you the newly returned Fullcast. It’s also as free as ever, because the world’s only college football podcast is truly priceless.

If you’d like to support any/all of this, you can launch some $ toward our Ko-fi page.

We don’t want to add to your list of obligatory subscriptions each month, so the bulk of what we publish will remain free for the foreseeable future. You can choose to send us any number of $ in multiples of 3, either as a one-time tip or recurring support.

And they started this off with a free post from Hall about the particular challenges of this year in college football. Some highlights:

We are all on a plague ship, voyaging through the vast expanse of the Endless Offseason. We’re standing on the foredeck without land in sight or a single voice on the radio to lead the way home.

That sounds grim, mostly because it is. Assuming a spring football season might not happen on such short notice — and if someone can figure out how to play two seasons of impact-heavy college football without ruining both, they should gather the conferences and request a hefty consulting fee for the privilege of sharing this secret — it could be over 500 days between full seasons.

There might be a few conferences playing out the fantasy of a normal autumn, sure, but their mutated 2020 seasons come contaminated by the asterisk of potential cancelation, the asterisk of playing conference-only schedules in a sport that only recently started handing out a semi-real national championship, the silence of partially vacant stadiums, and the general quease of piling even more risk atop the players’ shoulders.

This also comes just over a week after after Hall and Kirk resumed doing the Shutdown Fullcast with co-hosts Ryan Nanni and Holly Anderson, who are still at Banner Society. And it comes just after they helped (with Anderson, Nanni, and others) conduct the annual EDSBS Charity Bowl, with this year’s edition raising more than $450,000 for New American Pathways:

Apologies for the delay, but we hope you'll understand when we tell you the grand total of the 2020 #EDSBSCharityBowl came to just over $450,000.

So it’s certainly interesting to see Hall, Kirk, Johnson and Kirshner joining the ranks of sportswriters who have launched their own newsletters, including many from the SB Nation and Banner Society ranks. And it’s particularly notable to see them at the moment doing one that’s largely free, and supported by donations and merchandise.

But given the success of the Charity Bowl and the various Shutdown Fullcast live events and merchandising efforts, if anyone can make it work, these people can. And that just further goes to show how odd it is to part ways with them in favor of keeping the likes of noted political geniuses who are here to wonder why Chicago is a thing. And it’s once again funny that years after criticizing how his old corporate home of AOL interfered with and then blew up his widely-beloved FanHouse initiative after he left in favor of inferior efforts, Vox Media CEO Jim Bankoff has done the exact same thing, destroying a beloved sports site in pursuit of…well, it’s not clear exactly. But lots of SB Nation and Banner Society alums, including these four at Moon Crew, seem to be doing just fine on their own, and showing how silly Vox Media’s decisions have been in the process.