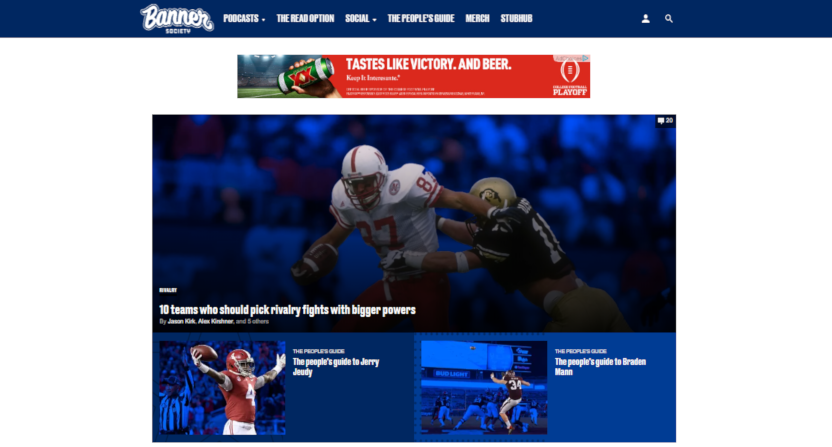 There have been some big changes to Vox college football coverage this year, specifically with the closure of Every Day Should Be Saturday and the minimizing of the larger SB Nation college football hub in favor of the launch of new cross-platform brand Banner Society. That brand is now up and rolling, and Banner Society head Ryan Nanni recently took the time to speak with Awful Announcing about it, saying he’s excited to have it out in the world after a long planning procedure.

“I’ve been really happy with it. It’s been really fun to actually kind of start putting things out into the world. This project’s been going on internally and behind the scenes for what felt like forever, and publishing things and sharing them with people is just gratifying in and of itself. I think it’s also just been fun to start to engage with people more. Obviously, we’ve been doing it internally, but getting to talk to people on Twitter or on Reddit or in the comment section, things like that, and just sort of renew the conversation that seems to never stop about college football and the universe in which it exists, it’s been a lot of fun and really invigorating.”

Nanni said the planning process started earlier this year, and largely involved them figuring out what each platform could be used for.

“We decided sometime earlier this year that this was a project we wanted to start to feel out and start putting some shape and some bones to. And then a lot of the process along the way was doing the work of going platform by platform, saying ‘Okay, what do we think Twitter is useful for for the college football fan? How do we fit into that? How does Instagram work for that? What do we think Twitch should do in 2019, and how can we make that part of a holistic college football experience and not just the one and only thing that we do?’ And within that, also taking the opportunity to say ‘Okay, this is the group that collectively has covered college football for a much longer time than some I would care to say, what are things we can do differently, what are ways we can push ourselves and try new things editorially and take advantage of the new world?'”

Banner Society replaces both Every Day Should Be Saturday and SB Nation’s college football hub, with even the @SBNationCFB Twitter account becoming @BannerSociety. Nanni said it was an evolution that covers more than what EDSBS did, and one that unlike the college football hub, isn’t focused just on a website.

“For Every Day Should Be Saturday, that is very much Spencer Hall’s baby, obviously with Holly Anderson, and I myself have played a not-small role in it over its lifespan, but that was something so quintessentially Spencer. I mean, the Twitter account (@edsbs) is his Twitter account, for God’s sakes. It’s different from EDSBS in that it’s broader and encapsulates more, like Bud Elliott doing interesting recruiting analytics work or Richard Johnson doing investigative journalism. That would not have made sense at EDSBS; it would have been seen as ‘Is this some sort of satire that I’m not getting?'”

“And as far as the national college football hub, I think the primary difference is that we’re viewing this as a more platform-agile opportunity. We as a group within college football, the bulk of our focus within the last five years or closer to 10, has been on the website, it has been on posting to website, getting traffic to the website. While we did things in other places, that was still sort of the primary impetus. And I don’t think that’s different from most of the sports media infrastructure in that time period. But now we’re trying to think more about ‘Okay, are there things we can do and ways we can put things out into the world that are not that, that are more suited to thinking about what the platform is useful for?’ Whether that is podcasts or whether that is Twitch or putting more things directly on Reddit and Twitter and just sort of meeting the audience where they are, I think that is structurally the biggest difference.”

While Banner Society has now been up for a couple of weeks (and has been running longer in terms of newsletters and other cross-platform efforts), Nanni said it’s still subject to change.

“It’s very much an experiment. We want it to evolve over time based on what the audience likes and doesn’t like and tells us that they might like. So that may mean trying new formats, going to new platforms, scaling back on other platforms if we feel like that’s not where the audience actually is. We’re trying to build something that is less about a specific website orientable and is more about a community that exists across a bunch of different places and can move between them.”

A key question with the cross-platform approach is how to monetize that; the past focus on websites and/or podcasts from many media organizations has been thanks to the ability to monetize those with banner ads or ads read during the podcast, and it’s not particularly clear how that would work for the likes of Twitter and Reddit. Nanni said their idea at the moment is more about growing their cross-platform audience rather than making money off each platform, though:

“That’s a great question, and I would preface by saying that this is not a thing we have totally figured out. To the extent that it is an experiment, it’s one that we’re trying to live in real time. My theory is that, and I should emphasize that it’s my theory, is that there’s a value to growing audience in each place. Even if you’re not going to directly monetize people on Twitter, we spent football Saturday with you having fun and cracking jokes and helping to keep the conversation alive and vibrant, and hopefully you’re more likely to come to a live show or buy a t-shirt, or if we had a subscription product down the road, subscribe to that, or throw us some money on Twitch, or use an offer code that’s on one of our podcasts. It’s sort of the idea of that if you can show that loyalty within your community, not everything has to be directly monetizable. We’ll get you there in time.”

The live shows there deserve further discussion, as the Shutdown Fullcast (typically hosted by Nanni, Hall and Jason Kirk) in particular has recently found some success there. Nanni said they have plans to do more live shows there, and the Fullcast live shows helped illustrate that there was a demand for some of what Banner Society is trying to do.

“We don’t have anything locked in right yet, and I know the minute I say ‘We’re coming here on this date,’ it will fall apart. But we’re going try to do probably three to five [live shows] this season. In many ways, the first live show we did was the impetus for a lot of this. One of the most interesting things to me coming out of that was we had I think about 300 people come out for an admittedly weird and sort of alt college football-ish podcast, but the people who came out were just as excited to see Steven Godfrey or Richard Johnson or Alex Kirshner. There was a familiarity with the overall body of work, a weird audiencem and that was like ‘Okay, there is a existing audience, there is a pot here that can be boiled if you sort of treat it the right way and pay attention.'”

At the moment, Banner Society has covered a whole lot, from a salute to Southern University’s “Human Jukebox” band to a history of overtime debates to an in-depth dive on the NCAA’s diversity approaches. Nanni said the overarching theme is what their writers are passionate about.

“I think they all come from the same base, things that we individually or as a group are fascinated by. And the form of that fascination can take several emotional arcs; it can be frustration and anger, it can be curiosity and wonder, it can be you know just taking the opportunity to reflect on the absurdity and the nonsensical nature of the whole. So I
think as long as it’s all rooted in ‘Hey, I am a human talking to another human about a thing that I am personally interested in,’ it becomes easier for the audience to say ‘Okay, Richard is talking to me about the NCAA’s sad excuse for a diversity database, because that’s a thing that he’s interested in, Bud is talking to me about what your recruiting base has to look like if you want to win the national championship, because that’s a thing he’s interested in, Spencer is talking about a Purdue wide receiver who can do all these magical things thing on the field, because that’s what he’s really interested in.’ And that’s sort of the common spice.”

As per that overall blend of silly and serious, Nanni’s known for that himself, as he famously wore the Outback Bowl’s Bloomin’ Onion costume in 2018 thanks to internet retweets. He said he believes he’s still the only college football editor to don a mascot costume.

“To the best of my knowledge, yes, unless Outback has been hiding information from me. Although, if Stew Mandel wants to put on the Bloomin’ Onion, okay.”

Nanni said the future for Banner Society includes looks at what makes college football enjoyable for fans, and attempts to try and relate to fans with that joy.