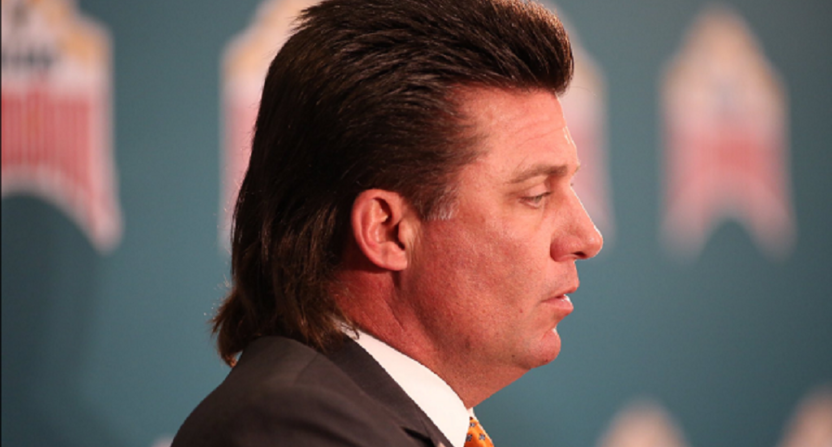 There have been access challenges for reporters in plenty of sports recently, but it’s perhaps been particularly bad in college sports. College coaches tend to have more power in setting media policies (which often substantially differ from school to school, as compared to pro sports policies that are often leaguewide), and they certainly have more control than pro coaches over if their (unpaid) players can or do talk to the media. That’s led to all sorts of pushbacks over the years, from Steve Spurrier getting a publisher to ban a columnist from covering South Carolina to Charlie Strong banning local media at Louisville to Lane Kiffin shutting out media from USC practices, Michigan barring their own student newspaper from a press conference about allegations reported by that newspaper, and Southern University banning reporters from talking to players. And it’s perhaps gotten even worse lately, with Oklahoma State coach Mike Gundy the latest culprit.

Last year, moves from LSU, Texas and Notre Dame prompted our Matt Yoder to write a column titled “College football programs restricting media access is sadly becoming the norm.” In there, he wrote “Access and reporting capabilities will be taken away as programs see what they can get away with without causing too much of an uproar. And sadly, it does look like it’s definitely a “when” and not an “if” for media outlets and for fans hoping for more information about their favorite teams.” That continues to be the case, and the latest case in point is illustrated by Oklahoma State associate professor Joey Senat, who’s focused on open government, media law, freedom of information laws and journalism. Senat tweeted Wednesday that he learned of a threat to reporters from Gundy through a sports information staffer:

An OSU SID, on behalf of coach Mike Gundy, threatened the press corps with the loss of player availability for the rest of the season if any one of them asked players Tuesday about a player's departure this week. @spj_tweets @APSE_sportmedia @rcfp @collegemedia @1stAmendmentCtr

Oklahoma State starting receiver Jalen McCleskey decided to transfer Monday. Mike Gundy figured reporters would ask players about it after practice Tuesday, and so he used his media relations director to communicate this threat before interviews began: If anyone brought up McCleskey with players, Gundy would ban player interviews the rest of the season.

This is a textbook case of making a bad situation worse. Now everyone isn’t just talking about McCleskey’s shocking departure, but Gundy’s heavy-handed reaction to it.

Indeed, Gundy has now brought a whole lot more attention to this. If he’d just let the reporters ask their questions, players probably wouldn’t have said much interesting (as Emig notes, this also suggests that Gundy doesn’t trust his players), and discussion of McCleskey’s departure would have been limited mostly to Oklahoma State media and fans, and maybe some recruiting analysts. Instead, in a classic Streisand effect, Gundy’s attempt to limit the story has now become a national story. So good job there, Mike.

And interestingly enough, that’s happened with many of the most egregious attempts from college coaches to hamper the media. All of the above stories have drawn major national backlash, and some of the above decisions, such as South Carolina’s and Southern’s, were reversed thanks to public pressure. So these kind of restrictions certainly don’t seem to keep stories quiet, and they’re not even logical enough to survive backlash in many cases.

However, there have been some incremental wins for coaches looking to tighten restrictions; closed practices in particular have become more prominent. Trying to dictate media questions is way beyond that, of course, but even that might have gone unnoticed if not for Senat picking up on it; most of the media in question didn’t mention it publicly themselves until this came out. And the overall trend is still definitely of access and reporting capabilities being taken away from media, which in many cases goes along with schools trying to tell their own stories through efforts like their own websites and The Players’ Tribune.

Thus, it’s important for journalists to flag and report completely over the top moves like Gundy’s, and for the public to respond in a way that makes it clear this isn’t acceptable. There’s still likely going to be a gradual tightening of restrictions, and that will be harder to stop. But cases like this do illustrate just how far some coaches are trying to go, and how it can easily become a national story when they try that. Maybe some other coaches will learn from that and realize they shouldn’t push quite as far as Gundy tried to here.