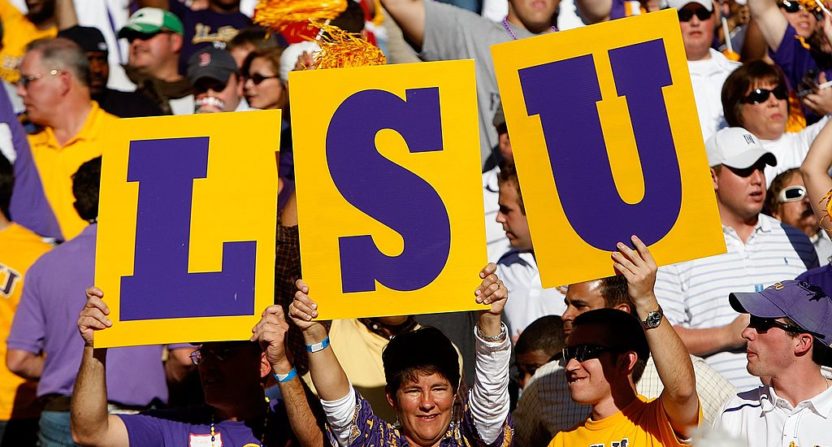 Across college football, athletic departments have trended toward slashing reporters’ access. They’ve closed practices, they’ve guarded injury information, they’ve limited live tweeting, and they’ve restricted which players can talk and how much. All of this has frustrated the people who cover the sport and, ultimately, harmed the fans who wants more information on their teams.

On Friday, LSU became the latest program to dramatically reduce access, announcing that preseason training camp would be entirely shut off to media.

#LSU announces that it is completely closing preseason camp. No media access at all.

School to provide photos and videos from practice.

This is a fairly drastic step. Many schools have some restrictions on how much of training camp reporters are allowed to see, it’s not often that media is banned outright from the entire preseason. It seems like a safe bet that new Tigers head coach Ed Orgeron won’t be quite as beloved by reporters as his gregarious predecessor Les Miles.

Sure a whole lot of reports out of training camp are overstated or uninsightful, but the best reporters are able to store nuggets from practice and develop them into thoughtful analysis or incorporate them into interesting features.

By comparison, here’s how the rest of the SEC handles preseason media access, according to The Advocate’s Ross Dellenger.

#LSU becomes the only #SEC school to not allow, at least, one day of camp access to the media.

The most notable aspect of this from a big-picture media perspective is that LSU thinks in-house photos and videos will replace information from reporters. More than anyone else in sports, college football programs across the country seem determined to control the narratives around their programs by delivering content directly to fans via social media, bypassing the independent media that might occasionally—God forbid—say a negative word when it’s warranted. Whether at preseason training camp or regular-season practices, someone should be around who’s allowed to be critical once in a while.

The scary thing is, there’s nothing to really stop programs from doing this. Some fans will miss the insights from their favorite beat writers this preseason, but most others will enjoy the photos and videos coming directly from LSU and go on cheering for the Tigers. Maybe at some point LSU will even hire an in-house reporter, the way many schools and pro teams have, to push the program’s agenda without those pesky independent reporters involved at all.