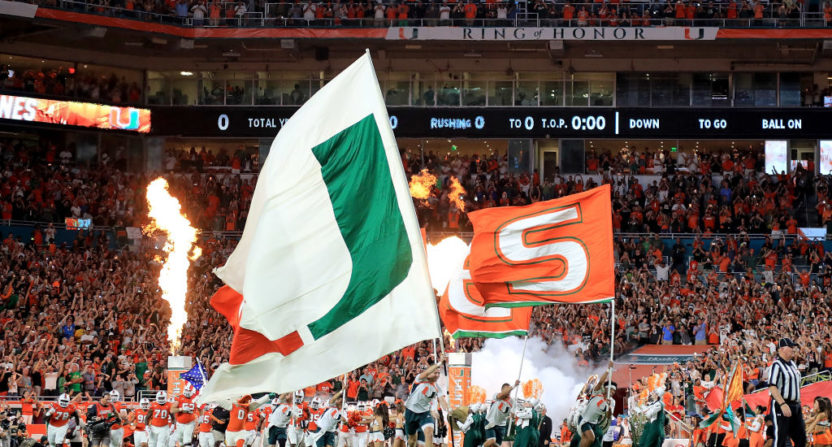 The Miami Hurricanes’ matchup against Notre Dame Saturday night dominated the national ratings with a 4.5 (well ahead of Alabama-Mississippi State’s 3.8 and TCU-Oklahoma’s 2.1), and it also did really well locally. So much so that it edged out the Miami Dolphins’ first Sunday Night Football game this decade. Barry Jackson of The Miami Herald has more:

Chris Fowler, a South Florida resident, said during the ABC broadcast on Saturday that when the Hurricanes are good, that can galvanize this community unlike anything else here, even in a market with four pro teams.

And we found it interesting that the UM-Notre Dame game was seen in more than 32,000 more homes locally than the Miami Dolphins’ first Sunday night game this decade, just six nights earlier.

The UM-Notre Dame game drew a 15.6 rating on ABC-10 in the Miami-Fort Lauderdale market. That’s equal to 15.6 percent of Dade/Broward homes with TV sets.

By comparison, the Dolphins-Oakland Sunday night game drew a 13.6 local rating. Miami’s second game against the Jets did a 13.8. (There wasn’t a rating for the Dolphins-Chargers opener because of the effects of Hurricane Irma.) And Miami’s stirring win at Atlanta drew a 13.0.

It’s definitely interesting that the college game outdrew every Dolphins’ game this season in the local market, as the NFL’s often viewed as the bigger beast compared to college football. But there are a few other factors to consider here; NFL ratings are down overall, the Dolphins aren’t good (4-4 heading into Sunday night’s loss) and the Hurricanes are (8-0 and ranked seventh in the AP poll and the playoff rankings heading into Saturday’s win, second in the AP poll and third in the playoff rankings afterwards), the Irish were a strong opponent (8-1 and third in both rankings going in, to say nothing of their fanbase, which might have further boosted ratings even in Miami territory) with a long history of memorable duels with the Hurricanes, and the Raiders weren’t anything to get excited about (3-5 heading into Sunday’s game).

So this isn’t necessarily “The Hurricanes will always outdraw the Dolphins,” and the last decade-plus of not-so-great Hurricanes teams is evidence of that. But this does suggest that a good Hurricanes team with a good matchup can outdraw a bad Dolphins team with a less-than-thrilling matchup. And Miami’s an interesting market to look at from that perspective, as it’s one of the few markets with both a top college team and a NFL team.

Atlanta is another one, and it’s been somewhat close at times. Two weeks ago, Falcons-Jets drew a 21.1 to Georgia-Florida’s 18.6, and the first weekend in October saw Falcons-Bills outdraw Georgia-Tennessee 19.5 to 16.7. The NFL team still won both of those matchups by a decent amount, though. No word yet on how Saturday’s top-ranked (in the playoff rankings) Bulldogs’ loss to Auburn compared locally to the Falcons’ win over the Cowboys. Dallas-Fort Worth is another market with both, but while sixth-ranked TCU’s local 7.6 rating Saturday against fifth-ranked Oklahoma was big regionally, it’s nothing compared to the Cowboys, whose local ratings slumped (!) to a 30.3 average earlier this season.

Thus, there isn’t a wider “college football is suddenly bigger than the NFL” angle for the moment. And it’s not even college football beating the NFL in most shared markets. But the Dolphins and Hurricanes story shows that under the right circumstances, it’s possible for a college football team to outdraw a NFL one locally. And it will be interesting to keep an eye on just how big the local ratings get for the Hurricanes now that they’re thoroughly in the playoff picture.