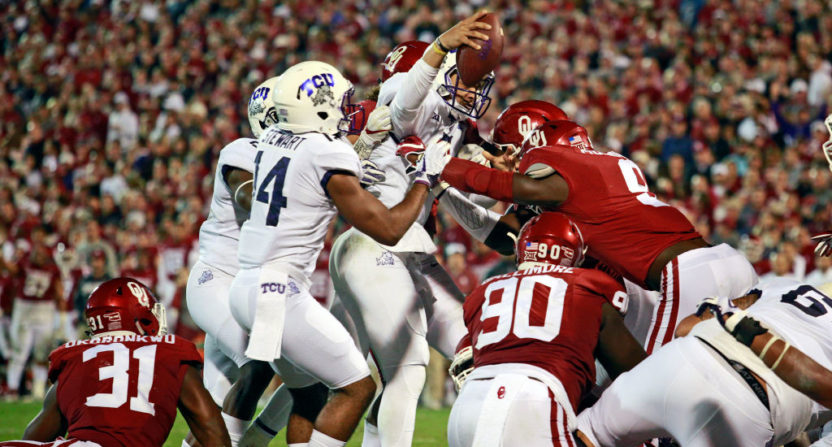 Saturday night’s Big 12 matchup between the No. 5 Oklahoma Sooners and the No. 6 TCU Horned Frogs drew well in the Dallas area for Fox, but was outperformed nationally in that time slot by No. 2 Alabama versus No. 16 Mississippi State on ESPN and No. 3 Notre Dame versus No. 7 Miami on ABC. And all of those games paled before what CBS drew for their SEC on CBS No. 1 Georgia versus No. 10 Auburn clash that afternoon. As Barry Horn of The Dallas Morning News writes, the Oklahoma-TCU game drew quite well in TCU’s home Dallas-Fort Worth market, but didn’t make much of a splash nationally against that competition:

Oklahoma’s Big 12 victory over TCU on Saturday won the college football day in Dallas-Fort Worth television ratings but nationally it finished an also ran.

The battle for Big 12 supremacy scored a 7.6 rating locally for Fox’s KDFW (Channel 4) in prime time. Nationally, it scored a 2.1, to finish well behind the day’s other big games. The big winner across the country was Auburn’s upset of Georgia.

There are a few interesting points to consider with those night games. The Miami game was the least close of all three, but pulled the biggest national rating. Granted, it gets an edge over Alabama-Mississippi State just by being on ABC rather than ESPN (and thus, not limited to cable subscribers), and many may have also tuned in and/or stuck with it thanks to the upset in progress, but its ratings edge is also perhaps due to the playoff implications. Notre Dame looked like a postseason lock if they kept winning, while Miami’s upset moved the Hurricanes to 9-0 and vaulted them to second in the AP and coaches’ polls. The playoff rankings don’t come out until Tuesday, but it seems likely The U will make the top four there as well.

And that perhaps explains why many nationally were drawn to Miami-Notre Dame over TCU-Oklahoma. Yes, there’s a good chance the Sooners could make the playoff now (they’re #3 in the latest AP poll and fifth in the coaches’ poll), but their game didn’t necessarily have as clear playoff implications until Georgia and Notre Dame fell. The format of the playoff may urge many to watch the current top four teams, and that can hurt the ratings of teams just outside the current picture, like No. 5 Oklahoma and No. 6 TCU, and benefit those inside it, like Notre Dame (at the time of this game) and Alabama.

Of course, there’s more to it as well. Miami and Notre Dame are both schools with big TV fanbases, and the endless hype for the return of the “Catholics versus Convicts” rivalry with a lot on the line certainly didn’t hurt in terms of drawing a neutral audience (although the blowout score may have meant the audience didn’t stick around all game). Alabama tends to draw a strong TV audience too, and Mississippi State led through much of that one before being outscored 14-3 in the fourth quarter, so that provided further incentive for those looking for upsets. But it’s still notable that TCU-Oklahoma seemed to underperform nationally next to its time slot competition, and it’s worth pondering if the playoff rankings played a role in that.

Granted, there probably would have been even less national interest in this TCU-Oklahoma matchup in the pre-playoff, two-team championship game era (there’s a good chance 9-1 Oklahoma can make a four-team playoff, but it would be tougher for them to get into a two-team championship game), but it’s interesting that teams just outside the playoff picture drew so many less viewers this week. That suggests there’s a whole lot of incentive for broadcasters to show teams #1-4, and less to show those a little further down. And that’s a further addition to the discussion about if the weekly playoff rankings are valuable. They’re certainly valuable for the networks that have the top-ranked teams, but not for those who have teams a little ways back.