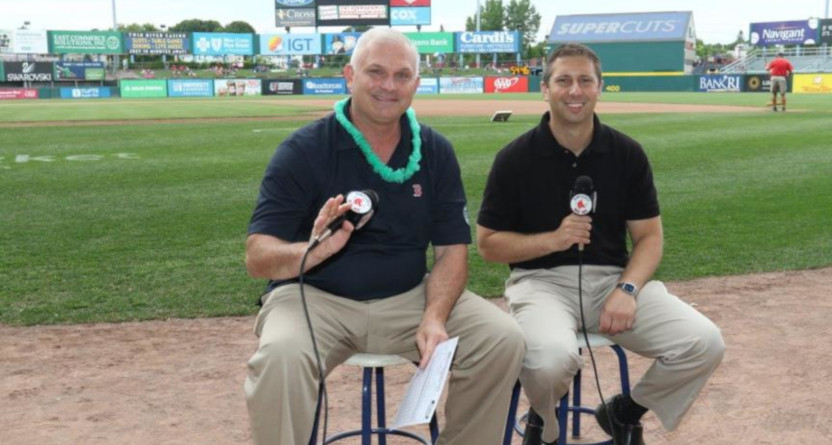 An ongoing challenge with the COVID-19 coronavirus pandemic has been the global issue of finding enough testing kits, and that’s affected some potentially-impacted broadcasters. One of those is Josh Maurer (seen at right above), who works as the play-by-play broadcaster for the (triple-A) Pawtucket Red Sox and the Boston College Eagles’ men’s basketball team. Maurer spoke to Steve Hewitt of The Boston Herald for a piece published Wednesday about his concerns over possibly contracting the virus and possibly spreading it to others:

In the span of a week, Maurer’s travels took him on two round trips that included eight different flights and seven airports. Maurer, who lives in Providence, R.I., had to fly commercially out of T.F. Green Airport, where he took a connecting flight to Tallahassee to call BC’s game at Florida State on March 7. He returned home before leaving a day later to fly to Greensboro, N.C., for the ACC tournament.

“I was very reluctant to travel at that time, but the games were being played and it’s my job and I had to do it,” Maurer said.

…“I was being I thought pretty vigilant, but the reality is, I think in the course of that week between going to Florida State, and then coming home and then going to the ACC tournament,” Maurer said, “I think I came into contact casually with more people during that week-long stretch than I do in any other week of my year.”

Maurer returned home Thursday, March 12 (following the cancellation of the ACC tournament) and quarantined himself, but wound up facing fever and shortness of breath (two key COVID-19 symptoms) by Saturday. He called around then and was unable to get tested. This Monday, he relayed that story on Twitter as a way to discuss the severity of this epidemic, and how the numbers may be much higher than the ones relayed officially. Here are those tweets.

I’ve been told by doctors over the phone to assume I have Covid-19 and have been in quarantine at my house in Providence, R.I. I’m fortunate that my symptoms are manageable. I ask often if its possible to get tested, but as of now there is still no way for me to receive one. (2/)

…Although at some point I would like to confirm that I’ve had the virus, as it will dramatically impact the way I need to live my life once I recover. Now, to explain my frustration. (4/)

These kind of choices are being faced by governors/civic leaders all over the U.S. But how can these officials be expected to make decisions about where more serious crackdowns are needed if they don’t have accurate info about the spread of the virus in their communities?? (6/)

…Yet our leaders are being asked to make decisions based off of the incorrect numbers they are presented. My point is this – our leaders are flying blindly in trying to guide us through the next steps. Please take this threat as seriously as it deserves to be. (8/)

Its likely that the situation in your community is worse than you realize at the moment. Thanks for reading and letting me get this off my chest! Stay safe and healthy! (9/9).

As Hewitt writes, those tweets led to Cody Chrusciel reaching out to Maurer. Chrusciel runs Princeton’s broadcasting operations, and hired Maurer to fill in for a Princeton game at Brown on Feb. 28; it was only recently found that someone he worked with on that broadcast had since tested positive for COVID-19. So it’s quite possible Maurer picked it up there. And as Maurer told Hewitt, that’s a terrifying thought considering how many people he’s been in contact with then thanks to travel, even with all the precautions he tried to take to wipe down airline tray tables and seat belts and repeatedly wash his hands.

And that further adds to the issues with governments not being able to test everyone who’s been in contact with those confirmed to have the virus. Some in that situation have been tested (including San Francisco Giants’ broadcaster Jon Miller), but many have not. And Maurer’s story there is a frightening one, and one that illustrates how big this pandemic could be.

Wanted to update everybody on my health – the past couple of days I have been feeling great, almost 100%. It is strange but exciting to feel normal again. Many thanks to everyone who has reached out with concerns and well wishes, I can't tell you how much they have meant to me!