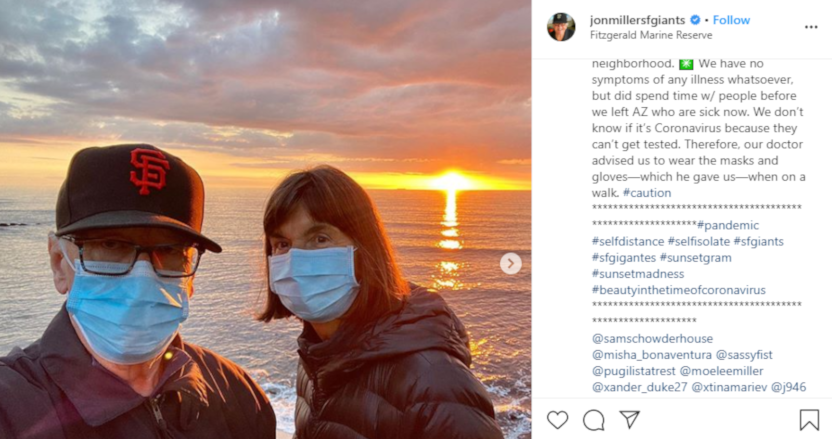 There have now been over 400,000 confirmed cases of the COVID-19 coronavirus around the globe, as per the World Health Organization’s situation report for Wednesday, and we’re starting to see more and more cases (both confirmed and possible) in the sports media world. ESPN has seen two employees in Manhattan and one in Bristol test positive for COVID-19, while Turner’s Charles Barkley was tested for the disease after possible exposure (he said Monday that test came back negative). The latest media figure to discuss being tested is San Francisco Giants’ broadcaster Jon Miller, who told Bay Area radio station KNBR (where he’s normally the lead Giants’ broadcaster) Wednesday that he and his wife Janine have now been tested for COVID-19 because of interactions with their son and his fiancée, who eventually both tested positive for the disease. John Shea of The San Francisco Chronicle has more on that:

In an interview with The Chronicle, Miller said on March 12, the day Major League Baseball canceled spring training, he and his wife picked up their son and his fiance from the Phoenix airport and drove them to where they live in Tucson.

The young couple hadn’t experienced symptoms until three days later and weren’t able to get tested until Saturday. They received the test results Monday.

Back on March 12, while symptom-free, they still were cautious with Jon and Janine, telling them not to hug them or touch their luggage just in case they had contracted the coronavirus in Europe.

Jon and Janine Miller had initially planned to fly home from Arizona, but their kids convinced them to self-isolate immediately. So they wound up buying a new car and driving back home, and they’ve been in isolation since except for an occasional walk, avoiding all interactions with others. Miller posted a photo of him and Janine out on a walk while wearing masks and gloves (provided to them by their doctor) on Instagram last week:

The Millers have now been tested for the disease, but the results aren’t in yet. But it’s good to hear that they at least haven’t been experiencing any symptoms so far. And while their son and his fiancée are definitely sick, Jon Miller told KNBR “They said it’s getting a little bit better.” So that’s also good to hear. Miller’s closing to his KNBR interview is also notable, with him expressing hope to see Giants’ fans again some day.

“This is a difficult time, and we hope you and yours are safe and secure in your lockdown and self-isolation situation and we all get together sooner rather than later at 24 Willie Mays Plaza.”

[The San Francisco Chronicle; photo via Jon Miller on Instagram]