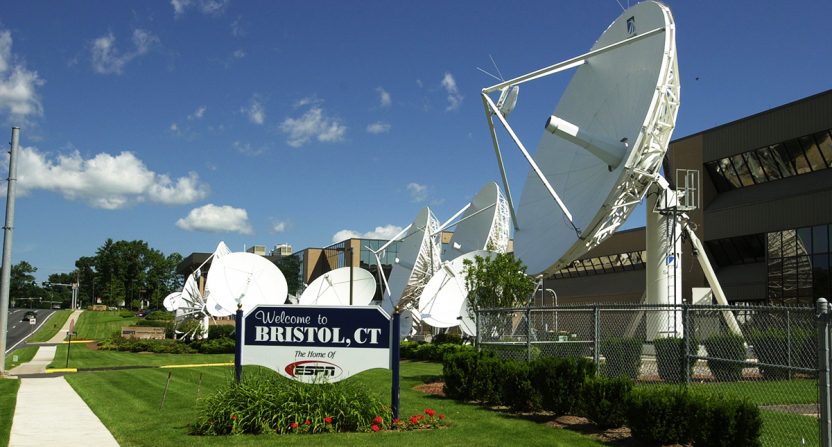 Over the weekend, ESPN informed employees that two employees, the first known in the company, had tested positive for COVID-19. The two employees were based in ESPN’s Manhattan office,  and had been out of the office since March 12th.

Awful Announcing has learned that starting late yesterday, ESPN has begun informing employees about a third positive test, this time of a Bristol-based employee. We’re told the employee was last in the office on March 13th, and that the employee in question is currently recovering at home.

ESPN has over 4,000 employees in Bristol, but has scaled back the number of employees working on campus to under 10% of that total. As of Sunday night, Connecticut had 327 confirmed cases of COVID-19, with eight deaths. Unfortunately, a positive test in Bristol is not surprising, given how many employees are located there. March 13th was a Friday, two days after the situation in America escalated substantially with the NBA postponing their season and America’s other pro sports leagues following suit. Hopefully, the exposure at that time was limited, given it came at a time where precautions and guidance was still taking root among employers and the general public and many hadn’t begun to socially isolate themselves.

ESPN has had to walk a tightrope over the past week and a half in terms of figuring out how to continue some semblance of operations while also respecting the health guidelines and best practices public officials have been providing. Some shows have been cancelled, live games are long gone, and many shows are utilizing less polished production with guests doing remote hits via web conferencing tools. These challenges are not unique to ESPN, but they’re still jarring for viewers, on-air personalities, and behind the camera staff alike. Hopefully, the one employee is an isolated case, and not the start of a larger spread across ESPN’s Bristol headquarters.