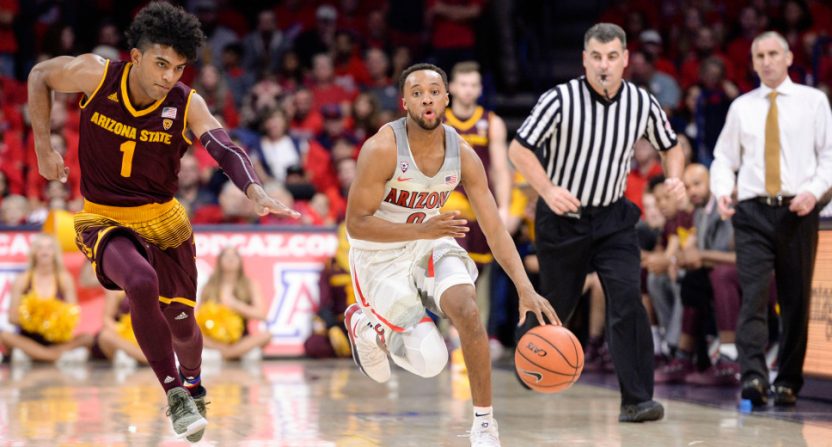 It’s no secret that the Pac-12 Networks have some coverage issues; despite a shrinking per-subscriber carriage fee, they’re still not on DirecTV and have no progress there, and are facing a potential drop from AT&T U-Verse. And even on some providers that carry the channels, they’re on expensive tiers that many bars and restaurants don’t carry, making things difficult for fans who want to watch games on those channels. Providers’ arguments for not carrying the channel or putting it on a high tier have generally been that the games aired on that channel aren’t compelling enough for many to really care, but one man allegedly went to great lengths to ensure he could watch a game at a restaurant while on vacation.

As per Tim Damos of the Baraboo News-Republic in Wisconsin’s Sauk County, county prosecutors have 51-year-old Kevin M. Cayton, the finance manager of a car dealership in Illinois, with felony identity theft for financial gain and unauthorized use of an entity’s identifying information. Those charges carry maximum potential sentences of six years each. What are those charges relating to? Oh, according to police, just impersonating staff at a Lake Delton (WI) restaurant to add the Pac-12 Networks to their cable package so he could watch a December Arizona Wildcats’ basketball game while he visited the area for the weekend:

Lake Delton police began investigating in February after the business manager at Buffalo Phil’s noticed a significant increase in the restaurant’s cable bill and contacted authorities, according to the criminal complaint.

The officer eventually obtained 11 phone calls that were recorded by the cable provider, Charter Spectrum, in December.

In the calls, a man who identified himself as Pat Barkley asked to add the Pac-12 channel to the restaurant’s cable package. He mentioned wanting to watch an Arizona Wildcats basketball game later that week.

…Officers later traveled to Illinois to visit Cayton’s workplace, the complaint states, but he declined to speak with them. They followed up with a co-worker to ask about Cayton’s demeanor after they left.

The co-worker “said that Kevin made a comment that he knows who gave him the user name and password and that he had done nothing wrong,” the complaint states. “Kevin also said the only thing he did was use someone else’s name.”

Well, that is quite the story. And yeah, it seems like there may have been a little help from the inside with something like that; a cable provider hopefully isn’t going to add channels to a package without account numbers or passwords. But the big thing here is the hilarious lengths Cayton allegedly went to. First, has he never heard of streaming options, legal or illegal? That would seem a whole lot simpler than making 11(!) phone calls to try and add the channel to the package for a restaurant in another state that you’re planning to visit to watch one game. (And how did this take 11 phone calls?! Maybe Charter Spectrum has some customer service issues beyond just New York…)

Oh, and it doesn’t sound like using someone else’s name is “the only thing” Cayton did. If whoever gave him the account info was authorized to order the package themselves, why wouldn’t they just do it? And if they convinced Cayton that they were, and that he should make 11 phone calls pretending to be them in order to do this thing that the business really should be doing themselves, maybe they’re the ones who should be working at the car dealership. But we’ll see what his defense is; he has a court date on Tuesday. (Can we also note that hopefully “Pat Barkley” is the name of someone associated with the restaurant, and not just a bad takeoff on Matt Barkley?)

It’s also worth noting the way the Wisconsin police tracked Cayton down. The News-Republic piece mentions that after obtaining the calls from Charter Spectrum, the police overheard the caller stepping away and speaking with someone in the background, saying “Hey, it’s Kevin.” So maybe don’t use your real name while you’re pretending to be someone else, on a call where you’re informed that this will be recorded for quality purposes? And in another call, the police overheard someone purchasing a car in the background and mentioning a second job they work at an Illinois health care facility; they were then able to contact the facility, find the employee, find the dealership, and find the guy named “Kevin” there. So maybe be careful with identifying background noise during any impersonations? Or maybe, you know, just find another way to watch the game? Or just follow it on Twitter?

That speaks to the further absurdity here. We don’t know the specific dates of Cayton’s trip beyond “late December,” but we know that it centered around an Arizona men’s basketball game on Pac-12 Networks. And the Wildcats’ schedule handily happens to list what networks games were on. In December 2017, they played three games on ESPN2 (Texas A&M, Alabama, Connecticut), one on CBS Sports Network (New Mexico), and two on Pac-12 Networks (North Dakota State on Dec. 18 and Arizona State on Dec. 30).

We’re going to presume the game against rival Arizona State is the one in question here, as hijacking a bar’s cable package to watch your team beat North Dakota State by 30 points seems even sadder than the other options here, but still, it’s a December game! In a month where your team’s played three games on a highly-distributed national network, and one on a less-prominent national network! Is watching a Dec. 30 game against Arizona State at a restaurant during your vacation really worth facing up to 12 years in prison?

But hey, perhaps conference commissioner Larry Scott and other Pac-12 officials can take some solace in the fact that their networks’ programming (or one game of it, at least) is compelling enough to drive at least one fan to do something worth facing charges adding up to over a decade of jail time. And when people question if they really have the fan fervor of other conferences, they can point to this. Maybe they can even use that in carriage negotiations.