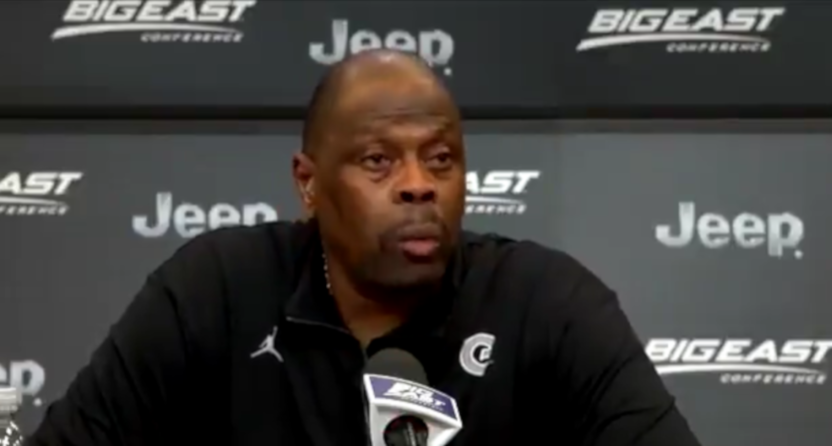 Something that’s been an issue for a long time, but has only really come to full public scrutiny recently, is poor performance by contracted “security” employees at basketball venues. The most jarring example of this comes from the NBA issue with Toronto Raptors’ president of basketball operations Masai Ujiri, who was first challenged and then physically struck by Alameda County sheriff’s deputy Alan Strickland following a 2019 NBA Finals game, a case which saw that sheriff’s department lie that Ujiri refused to present a credential and “struck our deputy in the face,” only to be immediately refuted by eyewitness testimony and later refuted by bodycam footage (which only emerged as part of Ujiri’s countersuit against Strickland, after Strickland’s ridiculous civil suit claims about injuries Ujiri caused him). The latest example of this comes from Georgetown coach Patrick Ewing, a New York Knicks’ legend who still somehow faced insane scrutiny from Madison Square Garden “security” during the 2021 Big East Tournament Thursday (around his team’s 72-71 quarterfinal win over #1 seed Villanova):

"I thought this was my building. … Everybody in this building should know who the hell I am."

Patrick Ewing was upset after he said he got stopped multiple times by security at Madison Square Garden. pic.twitter.com/r6DN9JITG8

Here’s more on that from Myron Medcalf of ESPN:

“I do want to say one thing, though. I thought this was my building,” Ewing said. “And I feel terrible that I’m getting stopped, accosted, [people] asking for passes.

“Everybody in this building should know who the hell I am, and I’m getting stopped — I can’t move around this building. I was like, ‘What the hell? Is this Madison Square Garden?'”

…MSG Entertainment released a statement to ESPN later in the day that read: “[James Dolan] and Patrick have a long-standing relationship; they spoke this afternoon and reaffirmed that. We all know, respect and appreciate what he means to The Garden and New York. Good luck to him and his Hoyas in the Big East semi-finals.”

It’s pretty clear at this point that a lot of these stops of Black coaches and executives have nothing to justify them. And anyone who’s working security at the goddamned Big East tournament at Madison Square Garden should know who Patrick Ewing is. This one is particularly notable given just how blatantly bad it is; there’s zero excuse for anyone contracted by MSG for the Big East tournament to not know what Patrick Ewing looks like. And it really goes to show how stupid this situation has become; if people hired by MSG for “security” duties can’t recognize Patrick Fucking Ewing during a tournament where he’s a well-publicized head coach, what are they even doing?

And it’s situations like this that have led to the likes of NBA commissioner Adam Silver saying that the league will hire its own security professionals for key playoff games going forward. If the rent-a-cops being paid incredibly gracious overtime for “security” services at basketball tournaments can’t even bother to figure out what the coaches and executives involved look like, and instead decide to challenge them based on their skin color, they absolutely should not be the ones cashing those checks. Perhaps those overseeing tournaments can find “security” staffers who are a little more knowledgeable and a little less racist.