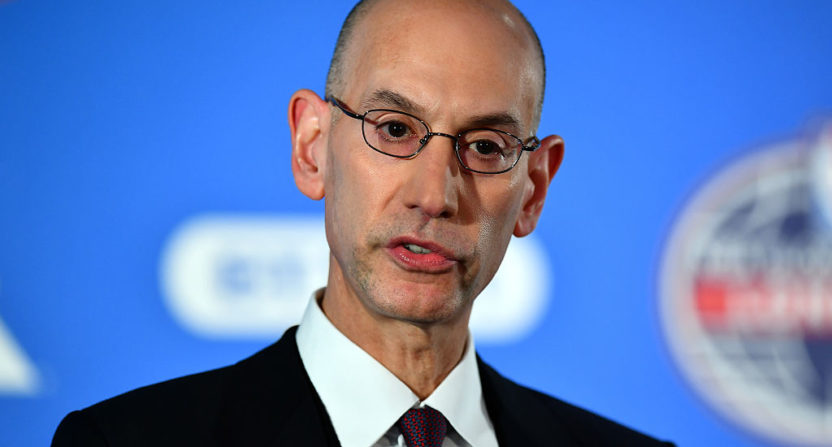 There are a whole lot of important things for the head of a professional sports league to do, but many of them are internally-focused and can’t always be fully evaluated from the outside. There is one critical role for a commissioner or similar executive that can definitely be evaluated by the public, though: “not causing problems for the league with comments to the media.” While many of these executives fail at this frequently, NBA commissioner Adam Silver has generally done pretty well by this standard, and he’s had some incredibly tough tightropes to walk (particularly with the NBA–China–Daryl Morey dispute). So that made Silver’s  October 2019 comments to Real Sports with Bryant Gumbel correspondent David Scott (part of a long feature on Toronto Raptors’ president of basketball operations Masai Ujiri) on the June 2019 NBA Finals incident between Ujiri and Alameda County sheriff’s deputy Alan Strickland a particularly rare and notable blunder, and it’s interesting that Silver has now publicly apologized for those remarks in an interview with Michael Grange of Sportsnet.

To start with, let’s discuss that June 13, 2019 incident, which saw the sheriff’s office claim the day after the Raptors’ title win that Ujiri “pushed and struck” Strickland, including with “another push that kind of moved up and struck our deputy in the face,” and that Strickland only “pushed back.” And the office investigated Ujiri for misdemeanor assault. But there was immediately plenty to dispute the sheriff’s office claims, including video footage of Ujiri holding the credential they claimed he didn’t present and eyewitness testimony that the sheriff’s officials “were not telling the truth” and that Ujiri never struck Strickland in the face.

And on October 22, the Alameda County district attorney declined to file charges against Ujiri. Granted, that specific decision probably wasn’t known when Silver’s interview was taped (the Real Sports segment aired on Oct. 23, but most of the interviews for those pieces are taped well in advance), but there was already a fair bit indicating that the sheriff’s office’s account should be viewed with significant skepticism. But Silver’s comments to Scott (at 17:20 in the clip below) very much both-sidesed it, and suggested that there were “lessons learned” for Ujiri and that “as a leader, those are the kinds of situations he needs to learn to avoid.”

“It’s part and parcel of what comes with someone who is living on the edge a bit and is hard-wired to sort of march forward with incredible energy. Lessons learned for him – without assigning culpability or blame to anyone – as a leader, those are the kinds of situations he needs to learn to avoid.”

Those comments look terrible in retrospect, especially after body cam footage emerged last summer as part of Ujiri’s countersuit against Strickland. (After the DA declined to press charges, Strickland launched a civil suit last February, claiming he  “suffered, and will continue to suffer, physical, mental, emotional, and economic injuries” as a result of the incident, and alleging that he suffered injuries to his head, jaw, chin and teeth from the altercation. Ujiri then launched a countersuit in August, with that footage submitted as part of it. That footage refuted the claims from Strickland and the sheriff’s office, and it eventually led to Strickland dropping his civil suit against Ujiri. Granted, that footage was not available at the time of these comments, but it makes it very clear that Strickland and the sheriff’s office dramatically misrepresented the situation, and that Ujiri did not do what they accused him of.

And it’s disappointing that Silver presented a both-sides approach to Scott in October 2019 (or whenever that interview was filmed between June and October), saying that there were “lessons learned” for Ujiri and that he needed to avoid those “kinds of situations.” Yes, the clear body cam footage wasn’t out then, and yes, the NBA was still working behind the scenes to avoid criminal charges being filed, and yes, an inflammatory statement going after the sheriff’s office probably would have caused a different set of problems. But Silver didn’t remain neutral here; he implied that Ujiri bore some fault for the incident. And he didn’t take the word of one of his league’s executives, or the word of the courtside spectator who said the sheriff’s office wasn’t telling the truth, or the video footage showing Ujiri with his credential, or the word of the other Raptors and NBA figures who observed this. And that’s what’s now led to his apology, as relayed by Grange:

“When I watch that last bit of the interview, in light of what we now know, I would love to take those words back,” Silver told Sportsnet during a recent phone interview. “[Masai] and I at this point have probably talked about that night 100 times since then. He has my full and unequivocal support.

“But I apologize to Masai for what I said in that interview…. Believe me, when I look at that now, I cringe when I watch it.”

“I should have known better, as a lawyer, not to comment on a pending investigation, which was the case at the time,” he said. “Even as I watch myself in that interview, I can see myself searching for the appropriate words and now see that I clearly misspoke.”

Yes, Silver absolutely should have known better, both as a lawyer and as the commissioner of a league where social justice protests against police misconduct have been a key issue. And he should have known better than to imply one of his executives might be at least partly at fault in this situation, when there was already a ton of evidence to the contrary. But Silver does deserve credit for addressing this now and admitting his error, and Grange’s piece includes Ujiri saying “This hasn’t been an issue between us in the past and it isn’t now. We have talked about it; I know I have Adam’s support and he has mine.”

And hopefully this can be something that league executives across sports, including Silver, can learn from. Not every situation has two valid or truthful sides to it, and it’s not always about situations people “need to avoid”; often, as in this case, avoidance isn’t possible or an answer. And what is really notable here is that this is going to lead to direct policy change for the NBA to avoid a recurrence of this particular kind of incident, as Grange writes:

From Silver’s point of view, the experience has already prompted meaningful and tangible change. Going forward, the NBA will have its own security staff at access points for key league events and during the NBA Finals, in particular, to make sure that something like what happened to Ujiri won’t happen again.

“It’s my responsibility, at least in terms of these kinds of incidences, that I put in place practices so something like what happened to Masai doesn’t happen to other Black executives in our arena or an any NBA event,” said Silver. “We should have had our own security person standing there who knows who to let centre court for the ceremony…. It’s on me, not [Ujiri], that similar situations like that don’t happen in the future.”

That was a key part of this problem in the first place. There’s zero reason why a sheriff’s deputy like Strickland who can’t even recognize one of the most prominent executives in the NBA, on one of the two teams in the NBA Finals, should be handling courtside security after a NBA Finals win. There’s zero reason why the NBA should be giving its money to local law enforcement officials who think the appropriate level of interaction over someone trying to show them a credential is grabbing the person, shaking them, and telling them to “back the fuck off.”  There’s also zero reason why the NBA should be paying for security from local law enforcement officials and agencies that not only mistreat NBA personnel, but then repeatedly lie about it. A NBA security staff will undoubtedly do a far better job, and will undoubtedly be better at recognizing NBA executives. So at least one tangible good thing has come of this.