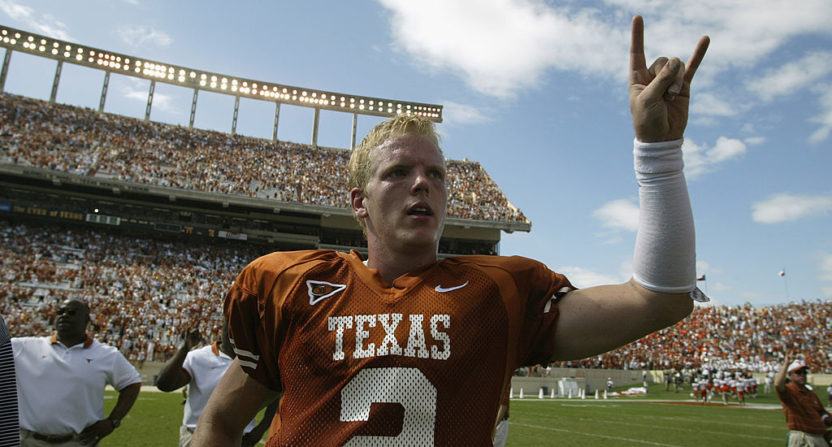 Former Texas Longhorns and NFL quarterback Chris Simms was recently announced as an NBC Sports studio analyst the network’s Notre Dame coverage to go with his role as co-host of “PFT Live” on NBC Sports Radio.

Simms stopped by the Dan Patrick Show on Thursday to talk about his new role but he also touched on a topic that related back to his playing days at Texas. Namely, the fact that he routinely took “$100 handshakes” from boosters.

“It would be the random booster that you might see only one time, right, but he would find you that one time and he might have 10 football jerseys for you to sign real quick, and you’d sign it, and then he’d give you, ‘Hey, thanks for this. I appreciate that.’ And he’d give you a $100 handshake.”

“For people to think that kind of thing doesn’t happen, it’s just stupid. Get over it. It’s happening everywhere.”

What might want to concern Simms is that as an in-studio analyst for Notre Dame football programming, his brash admission is at odds with the picture of amateurism that both NBC and Notre Dame are trying to paint. Not that they’re correct, but they’re the ones paying the bills. We’ll have to see if either party voices any concern over Simms’ admission and insistence it’s happening “everywhere,” which presumably includes Notre Dame.

Regardless, Simms isn’t afraid to speak his mind. In April, he publicly criticized CBS over the way they treated his father when the network demoted him, though he did later walk back some of that.