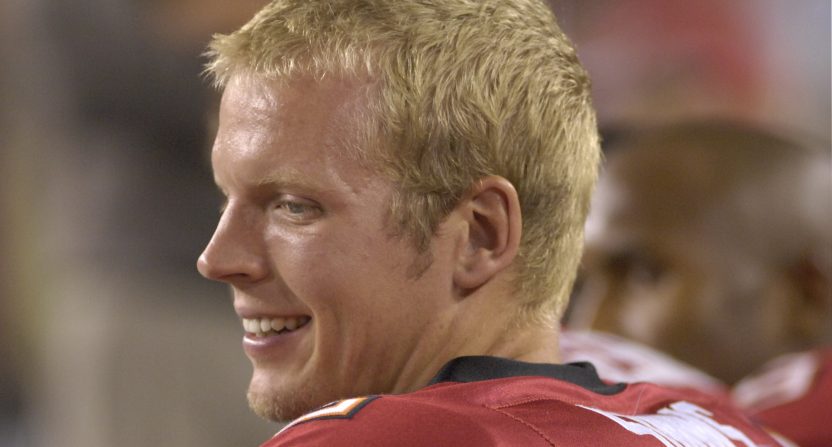 For two decades, Phil Simms was the top color commentator for CBS’ NFL coverage. Then, just like that, he was demoted Tuesday, replaced by neophyte Tony Romo.

That must be pretty hard to swallow.

Though Simms himself hasn’t said anything about losing his job on CBS’ No. 1 broadcast team, his son Chris has a lot to say. Chris Simms, speaking on Bleacher Report’s Simms & Lefkoe Podcast, said he was not pleased with how network executives handled the situation.

“I think anybody who’s in the media business—I’ll say this, I don’t if my dad would be happy or not—you can’t sit there as a normal person who’s evaluated this and seen if before and say, ‘Oh they handled it like professionals.’ It’s been out there rumored for two weeks. I had to tell my dad first, before CBS or anybody, because I found out from an NFL insider.”

For what it’s worth, the possibility of Romo joining CBS was first reported March 24, and the idea that he could displace Simms on the top team followed on March 29.

Chris Simms said when he found out about the rumored switch from an “NFL insider,” he forward the text to his dad, who was on vacation in Barbados. Phil Simms apparently didn’t know at the time that his demotion was in the works.

“He’s good. He really is. I think if there’s anything he’s a little disappointed with, it’s with that in general. I don’t think he feels like they talked to him right away, at least warned him to let him know this was happening. That’s just not what you do to a good, hard-working employee that’s been, for 20 years, the face of your football station. So I think it probably does hurt.

“Also, dad’s not complaining. He’s got two years remaining as far as money is concerned, as far as the No. 1 team. And they’ll figure out what they’re going to do. I don’t know what’s going to happen.

“Over the last few years, dad has gotten into the conversation a lot of, ‘I just want to enjoy my job. I’m 61 years old.’ I’ve heard him say that a number of times. I do think the Thursday-Sunday game-calling is going to wear him out. It’s going to wear anybody out.”

Finally, Chris Simms was highly critical of the notion that backlash on Twitter got his father replaced.

“Is anything positive on Twitter? Anything? I haven’t seem a fucking positive thing on Twitter ever. Twitter is literally for a bunch of fake who sit there mad at the world. They go around and smile when they’re face to face, and then they go home and they must be like, ‘I fucking hate everybody. You suck, motherfucker. I hate you.’

For them to say [Simms was demoted for Twitter response], have they looked at Jim Nantz’s Twitter feed? Or Joe Buck or Cris Collinsworth? They get shit on just as badly as my father. Maybe by dad just barely beats them out.”

The New York Post got a comment on the situation from a CBS spokesperson, who said, “Both Phil and his agent [Steve Rosner] knew in advance of the announcement and CBS had been in regular communication with his agent prior to that.”