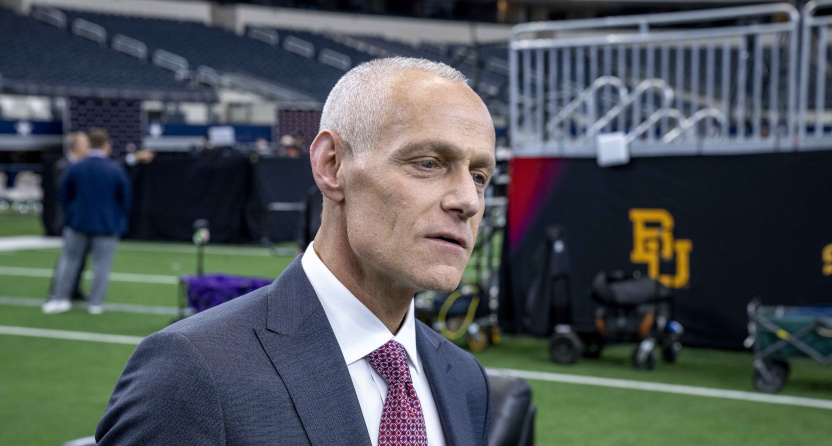 A notable part of the ongoing college realignment talk is just what the future revenues for conferences will be. The Big Ten, SEC, and ACC revenues for the next decade-plus under their current composition are largely known now (except for changes to the SEC deal with the addition of Texas and Oklahoma), but that’s not the case for the Pac-12 and Big 12, which have their contracts expiring after the 2023-24 and 2024-25 seasons respectively. Their future revenues are just projections at this point. But they’re trying to change that, with the Pac-12 already announcing their board of directors has authorized the conference to begin immediate media rights negotiations, and the Big 12 now following suit:

Sources: The Big 12 and its TV partners, Fox and ESPN, have agreed to enter early contract discussions about the league’s next television deal. The conversations will begin soon and come a year-and-a-half before the contract’s exclusive negotiation window. https://t.co/7MTWf2KPwY

Thamel’s story has more on that:

There is no formal window on these conversations between the Big 12 and ESPN and Fox, which are expected to begin soon. If no deal is reached, the conference can still secure a deal through a more traditional timeline.

“[Big 12 commissioner Brett Yormark] is doing what he should be doing, trying to gain an advantage,” an industry source told ESPN.

If the Big 12’s talks with ESPN and Fox turn into negotiations, it would likely be for a short-term extension that gives the league clarity after the current deal expires following the 2024-25 academic year.

The Big 12 and Pac-12 have been in some level of public conflict, with several Pac-12 schools reportedly at least meeting with Big 12 figures and others also mentioned as possible Big 12 targets. The conferences briefly talked about some form of partnership, but those talks broke down. And the “We’re open for business” remarks from Big 12 commissioner Yormark (seen above at the conference’s media days last month) were called “grenades lobbed in from every corner of the Big 12, trying to destabilize our remaining conference” by Pac-12 commissioner George Kliavkoff, who responded with the line of “With respect to the Big 12 being open for business, I appreciate that. We haven’t decided if we’re going shopping there yet or not.”

Thus, the relationship there doesn’t seem great right now, with both conferences firing shots and potentially targeting each other for expansion. And the Big 12 having these media rights talks earlier than that formal window may be an attempt to minimize the Pac-12 advantage from an earlier-expiring contract and current talks.

It’s unclear if these conversations will actually lead to a deal, though, perhaps especially in the Big 12’s case, as there’s still that year and a half until that formal ESPN and Fox window opens. A lot can change in that time. But if the Big 12 can land an early extension from ESPN and Fox (or even from one of them for a portion of the rights), that would give them more certain revenues to sell to current schools and potential targets. So it makes sense that they’re at least exploring this.