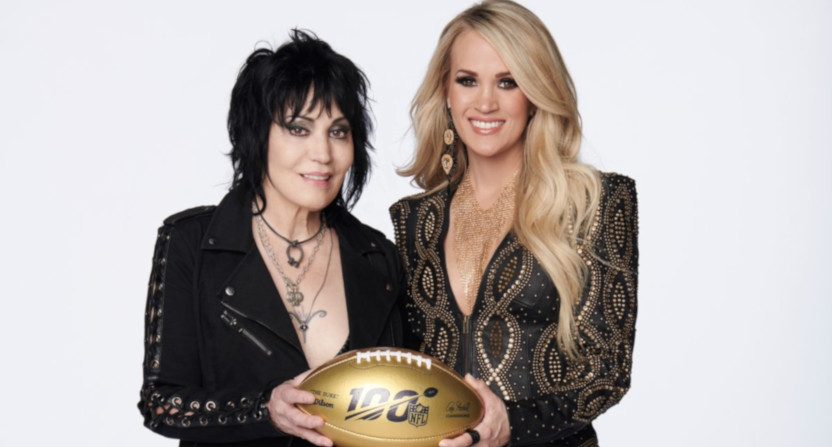 There’s a long and strange history to the Sunday Night Football theme, but it’s coming full circle this year. When NBC got Sunday night rights in 2006, they brought in the “Waiting All Day For Sunday Night” song based off Joan Jett’s “I Hate Myself For Loving You”; versions of that song were used from 2006 through 2015, with Pink (2006), Faith Hill (2007-2012), and Carrie Underwood (2013-15) performing it. In 2016, they went to a new Underwood-performed song called “Oh, Sunday Night” (which pulled from Underwood’s 2014 “Something Bad” duet with Miranda Lambert), and last year, Underwood, Chris DeStefano & Brett James penned a new “Game On” song that was used for the 2018 broadcasts.

But this June saw a (still-ongoing) lawsuit from Heidi Merrill, who said she created “Game On” in 2016 and uploaded it to YouTube in March 2017. She claims she pitched it to Underwood producer Mark Bright in August 2017, but was turned down. She then saw Underwood come out with the “substantially – even strikingly – similar, if not identical” version of “Game On” that was used last fall. That lawsuit names nine defendants, including Underwood, Bright, the NFL, NBC, and music publishing affiliates of Sony and Warner. And now, NBC is reverting to the first song, and bringing in Jett for an appearance in the intro:

And you've been WAITING ALL DAY FOR IT. @carrieunderwood and @joanjett are bringing back our iconic opening song this season: https://t.co/CKakj8arWd pic.twitter.com/q5o03f86CE

Here’s more from the NBC release:

NBC…will unveil an all-new show open with Carrie Underwood this season, with a nod to the first-ever NBC SNF open in 2006 featuring a new rendition of the original “Waiting All Day for Sunday Night” music.

…At the invitation of Underwood, Jett – whose 1988 Top 10 hit “I Hate Myself for Loving You” was adapted for the original “Waiting All Day for Sunday Night” SNF show open music in 2006 – appears for the first time in the NBC Sunday Night Football show open. Underwood will also be joined by NFL stars (to be announced on Monday) in the new show open.

“I have always been a huge fan of Joan’s, and I’m thrilled that she’s joining us for the Sunday Night Football open,” Underwood said. “What better way to pay homage to the original SNF opening song than by getting to play with her on primetime’s biggest stage?”

“When Carrie brought us this idea, we immediately embraced it as a terrific way to evolve the performance, while also celebrating the song we used in our first 10 seasons of SNF,” said Fred Gaudelli, Executive Producer of NBC’s Sunday Night Football. “We were excited when Joan agreed to join us, and we can’t wait to debut the finished product.”

We don’t know exactly how this new one will look and sound, but for those interested, here’s a video with all the various Sunday Night Football themes from 2006-2017. The 2013 one (Underwood’s first time performing it) comes around 9:55:

It’s interesting to see NBC return to the original music, which lasted much longer (albeit in one version or another) than the two Underwood songs they’ve tried since then. It had its critics (including Mike Francesa), but at least it didn’t lead to any lawsuits. And it’s notable to see Jett actually appearing on camera this time. We’ll see how much of a role she winds up with, and we’ll see how this new old theme is received.