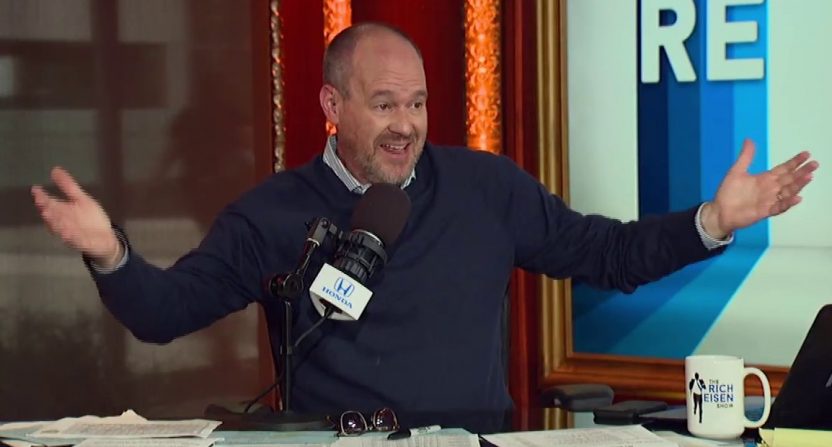 After being off the air (and internet) for the past month, The Rich Eisen Show has a new home. Well, maybe it’s more like the show signed a new lease after trying out a short-term stay.

Beginning Aug. 17, Eisen’s showcase program will relaunch on NBC Sports Network, televised from noon to 3 p.m. ET. The show will also stream live on NBCSports.com and the NBC Sports app, and simulcast on Sirius/XM and PodcastOne.

And as of Oct. 5, The Rich Eisen Show will also stream on Peacock, NBC’s new streaming platform. The network’s official release says the show will stream exclusively on its streaming service, which presumably means it will no longer be available live on YouTube.

We’re baaack!
Starting on August 17th, you can catch us 12-3pmET every weekday on @NBCSports @NBCSN and SOON we start streaming everyday with our new partner @peacockTV!
Same show, same time, new Peacock. See you soon.
Read all about it here: https://t.co/mMgUgSXWeL pic.twitter.com/3PVTlIWST7

The Rich Eisen Show had previously been on NBCSN for a two-month stint earlier this year from April to June. Adding Eisen approximately a week before the 2020 NFL Draft, in addition to the league’s 2020 schedule release two weeks later, was timed to boost the network’s pro football programming with the NFL Network personality.

The limited run until June 12 was apparently a test run for NBC Sports and the show. Eisen and crew then streamed the show for the rest of the month on YouTube and Sirius/XM before taking July off (and perhaps working out this new arrangement with NBC Sports).

Eisen landed for that first run on NBCSN following the shuttering of AT&T’s Audience Network. While The Dan Patrick Show moved to Fox Sports Radio and YouTube after Audience Network shut down, Eisen’s program was left briefly homeless until agreeing to a short-term stay with NBCSN.

For NBCSN, The Rich Eisen Show fills a big midday chunk of on-air programming. During the COVID-19 sports shutdown, the network had been airing Lunch Talk Live, an interview show with Mike Tirico, and is currently running Dale Jr. Download in that noon ET slot.

But the restart of the NHL season and the league playing round-robin and Stanley Cup Qualifier games (some of which are being called by Tirico) are now taking up much of NBCSN’s daytime programming and figures to do so right up until Eisen’s relaunch is set to debut. And if the NFL season is played, the show premieres when full-contact practices begin in training camps.

The show’s mix of sports and pop culture could make it a good fit for Peacock. Maybe fans watching Premier League or golf coverage will give it a look for sports interviews. And the celebrity conversations could attract a wider audience using Peacock for movies and TV.

So if you’re a devoted fan of Rich Eisen’s show and haven’t yet signed up for Peacock, will this make you do so?