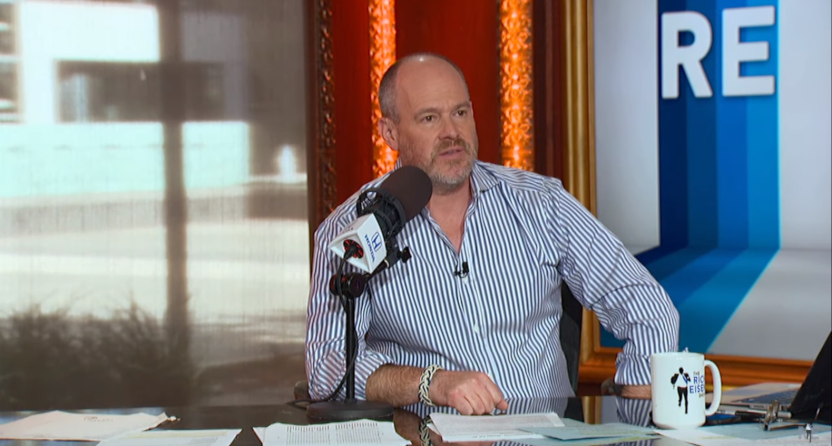 The end of Audience Network’s original content (in favor of shifting the channel into a HBO Max preview) as of Feb. 29 has caused some changes for the two prominent sports radio shows that originated with Audience (and channel owners DirecTV and AT&T). The Dan Patrick Show announced last week that their video cast is moving to YouTube, and Ryan Glasspiegel of The Big Lead reported Monday that Patrick has now struck an arrangement to keep his show on Fox Sports Radio (in conjunction with Premiere Networks and iHeartRadio). However, as per Glasspiegel’s piece, there’s much less clarity about what’s next for the other prominent Audience-originated sports radio show, The Rich Eisen Show:

The Dan Patrick Show announced this morning that, in addition to running live on YouTube, the program will remain airing on Fox Sports Radio in conjunction with Premiere Networks and iHeartRadio. The Big Lead has learned from a source with knowledge of the news that the Rich Eisen Show will not remain with the networks. A spokesperson for Premiere declined to comment.

Dan Patrick and Rich Eisen were in similar situations where their shows originated via AT&T’s DirecTV, which announced that it is repurposing the Audience Network to be a promotional vehicle for HBO Max, the streaming service the company is launching in May.

While Patrick struck a deal for his popular show to remain where it is on the terrestrial radio side of things, Eisen is looking for a new home. His show concluded on Audience Network last week, and will be finished on radio on April 7th. It is unclear at this time whether the next audio home for his show will be on radio or via podcast.

Glasspiegel’s piece goes on to mention that many Fox Sports Radio affiliates will likely shift to The Herd With Colin Cowherd, which is also offered by that network and is in the same noon to 3 p.m. Eastern timeslot (Patrick’s show runs from 9 a.m. to noon Eastern, and is Fox Sports Radio’s only offering there, so there was probably some more pressure on them to keep it). But that’s certainly unfortunate for Eisen (seen above) and his show (which has been running since October 2014 on Audience and since November 2014 on Fox Sports Radio), and for fans of the show.

There’s still a fair bit of time here, of course, as Eisen’s show will remain on radio for over a month still. And Eisen has quite a significant profile; he’s also well known for his NFL Network work, and he has 1.22 million Twitter followers, while his show has 75,400 followers and its YouTube channel has 159,000 subscribers). And that show has drawn plenty of fans and made a fair bit of news, especially for some of the interviews and bits Eisen has conducted over the years. So it’s definitely very possible that this show will land a big new audio and/or video home in the near future. But with the uncertainty about what’s next, Eisen’s signoff from Audience last week was a bit melancholy for fans. (It was a very sweet and well-done tribute to his staffers on the video side, though.)

And the timing here is also unfortunate, as this video shutdown and reports of future audio uncertainty come right after the NFL combine. The combine has often been one of the biggest times of the year for Eisen, not just with his anchoring of various NFL Network coverage from there, but also with his now-annual “Run Rich Run” 40-yard-dash fundraising effort and the post-event discussions on his show. Here’s how that went down this year:

Check out how Run Rich Run, on behalf of @stjude, went down this weekend following the #NFLCombine in Indianapolis. Thanks to @JerryRice and @gkittle46, as well all of you that donated and ran your own 40's, for your support! #RunRichRun pic.twitter.com/A4RG5cp204