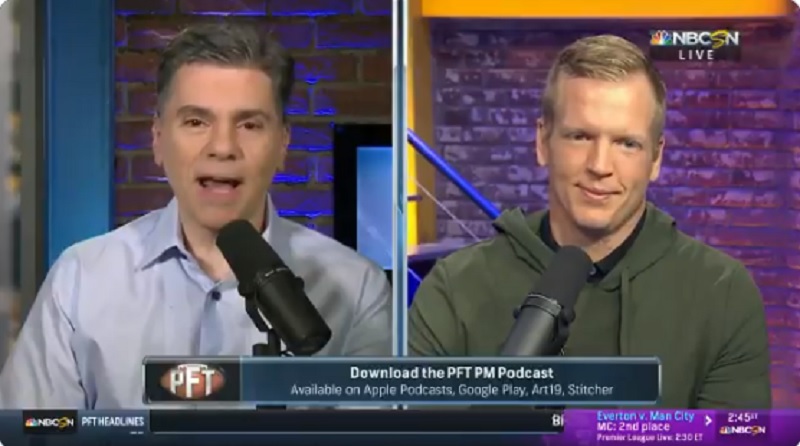 On Tuesday, NBCSN announced how they will fill the Dan Patrick Show’s departure on their daily morning lineup.

Starting on Monday, March 4th, NBCSN will replay PFT Live from 9-11 AM, immediately after its initial 7 AM airing. The 11 AM-noon hour will be filled by an hour of Sky Sports News, beginning on Friday, March 1st.  The PFT Live four hour window this Friday will all be live content from the NFL Combine.

“We look forward to sharing Sky Sports News’ best-in-class coverage and perspective on the world’s most popular sports with our NBCSN viewers each weekday morning,” said Jon Miller, President of Programming for NBC Sports & NBCSN. “PFT Live with Mike Florio is the best source of NFL information every weekday, and this new schedule will provide added exposure each morning.”

I understand what NBC is doing here. Replacing the DP Show with a replay and a simulcast is most likely a hell of a lot cheaper than agreeing to a new deal with Patrick. It also leaves the door open for a potential return down the line without having to displace a new show, and also plugs the hole heading into the typically dry summer months. If this is still what NBCSN’s schedule looks like in six months, then there’s more reason for concern. For a short-term fix, it’s fine, but this isn’t a long-term solution.