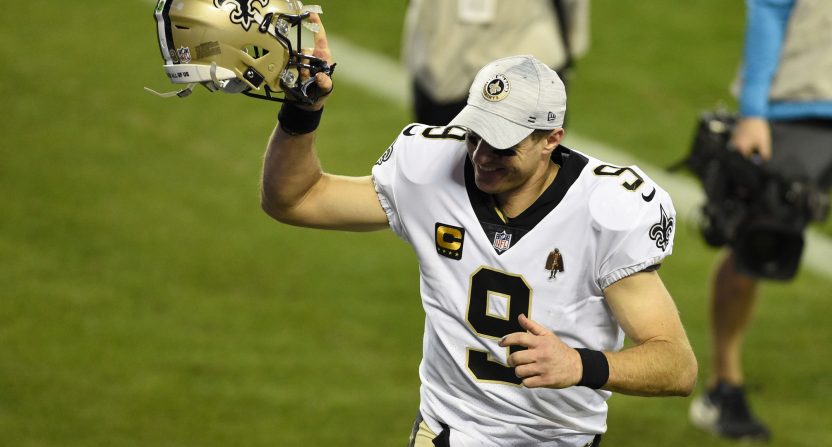 It’s impossible now for a quarterback to go fairly directly from the NFL to the broadcasting booth without being compared to Tony Romo. Romo’s success at CBS (even if his style isn’t universally beloved, you can’t deny how he’s impacted their broadcasts) has prompted other networks to seek out their own equivalent by going after players recently out of the league, or other quarterbacks with name value.

Brees was always seen as a likely candidate in a similar vein to Romo, and now that he officially has a broadcasting position, the question was always going to be asked: will he be attempting to predict plays before they happen, as Romo occasionally does?

Thanks to a Forbes profile by Michael LoRé we have our first clues as to how Brees will approach the role, and yes, he does say he plans to emulate Romo’s style, at least to a point.

“It’s one thing to understand the game having played it and being able to see it and process it a certain way, but it’s another thing to be able to articulate it and to be able to storytell and put it into a broadcast or a show,” Brees said. “I think there’s a balance there and I definitely think there’s a skill set there as well. … Especially if you have knowledge of the teams you’re watching, you’re maybe able to anticipate what’s coming. It definitely is a different skill set to be able to articulate it and communicate it though. It’s an exciting challenge.”

This makes sense on a few levels. Obviously Brees isn’t going to come out and say “Yeah I’m going to do what Tony does!” because that would be impossibly silly, both from a PR standpoint and from a strategy standpoint. Brees needs to be himself as much as possible (from a football analysis perspective.) Plus Brees is starting out in the college game, and while there are way more overlapping playcalls and strategies than there were when, say, Brees was at Purdue in the late 90s, it’s still not the same as having Brees calling NFL matchups.

The whole profile is worth a read, as Brees goes into more detail about how the transition has gone for him so far, and what he plans to work on more.

For those curious about how he’ll handle the move, you won’t have to wait long; we’re less than two months away from his NBC debut.