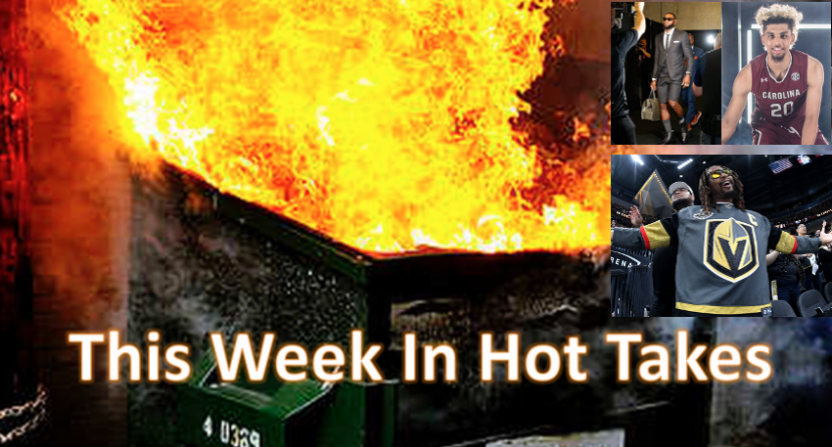 Welcome to another edition of This Week In Hot Takes, this time breaking down the hottest sports media takes from May 25-31.

5. Stephen A. Smith goes off on LeBron’s lack of achievement, “stimulus package” the NBA gave Cleveland: There have been plenty of complaints about a supposed easy pathway to the Finals for LeBron (never mind how Boston pushed the Cavs to the brink), but Stephen A. not only brought a particularly fiery one, he also claimed that the Cavs’ 2016 victory over the Warriors came thanks to a NBA “stimulus package” with the Draymond Green suspension:

I was just trying to stay calm, but my man Michael Wilbon is driving me crazy saying this is LeBron's greatest accomplishment!!! pic.twitter.com/c506HDVapn

That’s a nice hot take combination. And it’s impressive that Stephen A. is still finding ways to minimize what LeBron’s doing with very little help around him.

4. Darren Rovell thought the SEC should be called after WWF’s Vince McMahon “limo explosion”: Okay, this is technically a take on a 2007 incident, but it’s one that Rovell only revealed this week on the SI Media Podcast. And it’s an incredible take:

I can’t believe Rovell thought the SEC should be called when WWF blew up Vince’s limo. I had to hit the 15 second back button about 5 times.

My favorite part of this week’s SI Media Podcast was arguing with @darrenrovell about this horrible Vince McMahon take. https://t.co/prdwvdHL8s https://t.co/2xCXmRPOmn

That just screams Darren Rovell, first from ignoring the sports context and focusing on the financial implications to completely missing what’s actually going on to trying to get the government involved. What a take.

3. Skip Bayless somehow finds ways to criticize LeBron: This isn’t particularly surprising any more, considering that Skip Bayless’ career at this point is basically just “LeBron James critic,” but it’s incredible to watch the loops Bayless will twist himself into to minimize LeBron’s accomplishments, especially during a 51-point, eight-rebound, eight-assist performance. That marked the highest point total in a NBA Finals game since Michael Jordan, only the sixth total over 50 points in NBA Finals history, and the only time a player dropping 50 in a Finals game lost. And yet, Bayless still found ludicrous criticisms to lob in in real time:

LeBron has gone over the edge with his "heat check," taking wilder and wilder shots, missing again and again, playing no defense. If the Cavs are going to hang in, LEBRON JAMES HAS TO GUARD KEVIN DURANT. Crucial strategic switch.

LeBron is turning into James Harden. MOVE THE BALL. GOOD THINGS WILL HAPPEN.

LeBron didn't rebound on the missed free throw while he was arguing the call. GSt putback. LeBron: turnover, turnover. THIS GAME WAS SO WINNABLE. Now, looking dim.

“Was Skip Bayless really that great?” The answer is a very clear “No.”

2. [Updated.] We initially put Jon Rothstein’s tweet that it was “sad” that Brian Bowen never played a minute in college here, reading that as one of the many comments against basketball players who opt to turn pro. Rothstein reached out to clarify that he meant it was “sad” that a top player like Bowen didn’t get to play thanks to an eligibility scandal, saying “It had absolutely nothing to do with whether or not he should bypass the chance to make money professionally. This was strictly in regards to the notion that a highly touted player with tremendous promise will never get to play college basketball.” That’s a reasonable take, so we’ve removed his hot take points. We apologize for misreading the initial tweet.

That didn’t leave a lot of time to play thoughtful basketball. And little of it — fast breaks, give-and-goes, down-low screens, one-touch passing toward off-the-ball movement — was seen. Had it not been a Game 7, it would’ve been another dare to the better sports senses to endure.

With 74 3-point shots, the blind notion that this would’ve been a 220-plus points game is understandable. But the final score was Cavs 87, Celts 79. Only 16 of the 74 shots — 22 percent — were successful, which seemed a pitiful waste of talent, not to mention the abandonment of a cherished team sport.

How is it any less of a team sport when players are shooting from three-point range instead of two-point range? There’s still plenty of passing, screens and so on; Mushnick just conveniently ignores it. And yes, three-point shooting is a “dare to the better sports senses.” Just because Mushnick grew up before the three-point line doesn’t mean the basketball then was better. And his rants on bat-flipping and rap music are even more deluded:

Tuesday, prior to Mets-Braves on WOR Radio, new Met Jose Bautista was interviewed by host Wayne Randazzo. I’d never heard Bautista interviewed at length. He humbly spoke of his charitable organization giving “me a chance to reciprocate” for his professional success. Fabulous. But then why would he choose to be known as an excessively immodest, antagonizing, unsportsmanlike, in-yer-face home run bat-flipper? It made no sense. Is one act a con? Both?

If it met with the NHL’s standards that standardized rapper — vulgar, N-wording, women-denigrating — Lil Jon entertain before Game 1 of the Stanley Cup final then was interviewed on NBC during the game, Gary Bettman should be equally eager to recite or display Lil Jon’s written, produced and sold lyrics.

Reader Frank Macy suggests that Bettman could begin with the pornographic “Bend Ova” then conclude with a few lines from “Real N—- Roll Call.”

If a white NHL player called a black opponent the N-word or spoke lewd sexual degradations of women, Bettman would publicly gnash his teeth then announce an immediate fine and suspension, decrying the inexcusable shame of it all!

This is just Mushnick being Mushnick, but it is remarkable that his absurd takes continue to get printed every week.