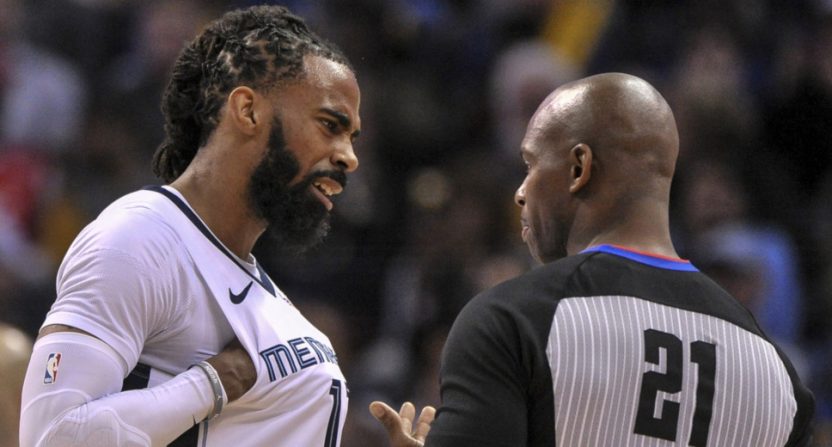 It’s always fun when media outlets or personalities post premature headlines (or ads), and Sports Illustrated (which was in the news itself Monday for having its publishing operations sold again) did just that Monday. Amidst swirling rumors that the Memphis Grizzlies were trading point guard Mike Conley Jr. (seen above talking to referee David Guthrie during a March 27 game), with the Utah Jazz and Phoenix Suns predicted as likely landing spots, SI briefly posted to Apple News and to Yahoo (as part of a syndication deal they have), and possibly to their own site as well, an in-progress story featuring an unholy hybrid of the Jazz and the Suns as Conley’s destination. Here’s a closer look at the Apple News story, via Katee Forbis: 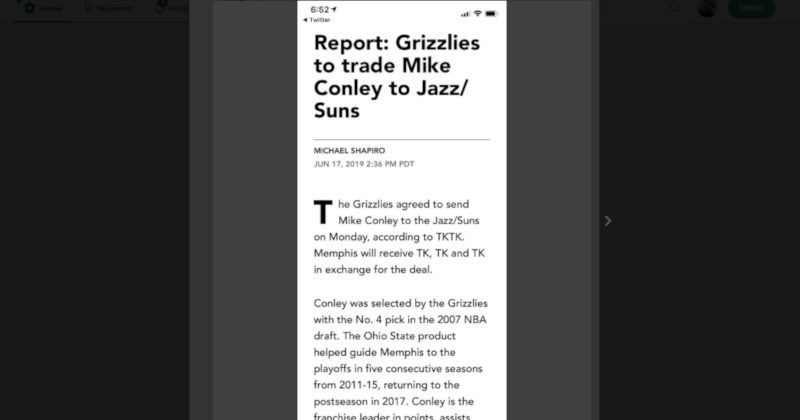 And here’s a look at the Yahoo one, which remained up three hours later (at 8:45 p.m. Eastern Monday). First, it was a a top Google search result for “Mike Conley”:

And here’s how the start of the actual article looked:

The “TK” there is publishing shorthand for “to come,” which makes sentences like “The Grizzlies will receive TK, TK and TK in exchange for the deal” quite humorous. But this really isn’t a surprising pre-write of a story; doing something like this is common practice for breaking news where there seem to be only a couple of possible options. (It happens with deadline coverage of close games, too; many reporters write both a version where the team they’re focusing on wins and one where that team loses, then just publish whichever one turns out to be correct and delete the other.)

Fortunately for SI, this report doesn’t seem to have been published that prominently or for that long. But it’s still funny to see this, especially with Jazz/Suns, which sounds like extremely musical celestial bodies. Wherever Conley winds up, it’s probably not going to be the Jazz/Suns. (Unless the NBA goes all NFL-during-wartime and gives us a Steagles or a Card-Pitt.)