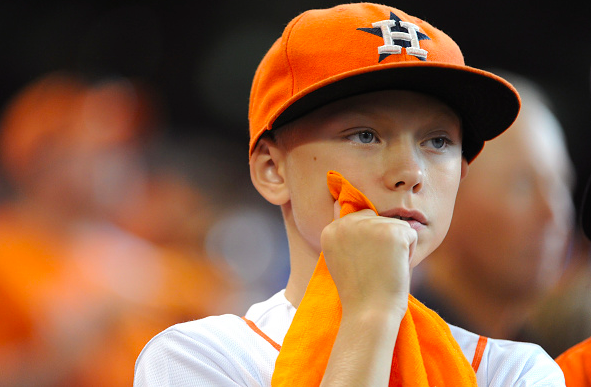 #StickToPolitics, Governor? Of course, talking sports makes a politician seem like a regular guy. And there’s no better way for an elected official to ingratiate him or herself with a community than joining the fun that comes with the success of a local sports team.

But maybe someone in Texas governor Greg Abbott’s office needs to speak with him about prematurely congratulating a team and celebrating a victory before the outcome is assured. Everyone knows that doing so invokes the Gods of Sports Justice and casts a jinx on a potential victory, right? Right?

Oh, Governor Abbott — no. Just no. To be fair, the Houston Astros had a 6-2 seventh inning lead in Game 4 of the ALDS when that tweet was sent out. A victory eliminating the defending American League champion Royals and sending the Astros to the ALCS looked like a relatively sure thing. But don’t go running that victory lap before the win is official. You’re just asking to trip and fall.

The governor’s tweet was deleted, but the damage was done. And thanks to screen caps, retweets and nothing really disappearing from the internet anymore, we know what happened. Astros supporters and baseball fans won’t forget. And what if the Royals end up winning Game 5 of the ALDS to clinch the series and eliminate Houston? Oh, Governor. No.

On the bright side for the Astros, maybe this lets shortstop Carlos Correa off the hook for his eighth-inning error on a possible double-play ball that allowed two runs to score and tie the game 6-6. Never mind that Correa hit two home runs in the game and helped Houston build that big lead.

Just stay away from that Twitter account until after Wednesday’s Game 5 is finished, Governor. Astros fans are begging you.