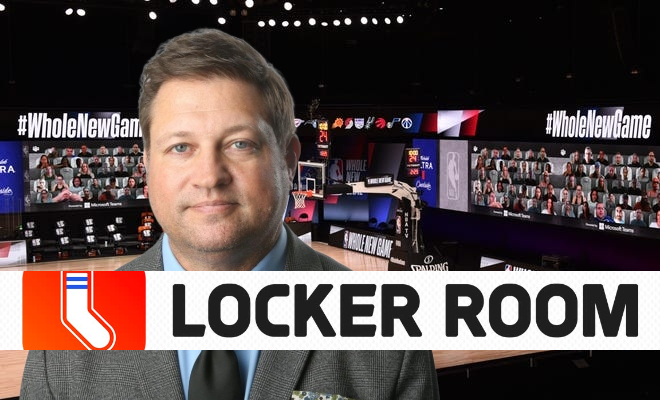 New York Times NBA reporter Marc Stein may no longer have the television outlet that he once did with ESPN. But he’s created a new outlet for himself that allows him to share his reporting and insight with fans, and it might be something that catches on throughout the sports media industry.

“Fans have been calling into radio shows forever, but this is a totally new genre,” Stein told Baker. “The host and the audience have never been able to hang out like this without being rushed. I see it as the old ESPN.com chats of yesteryear springing back to life in audio form.”

"I don't think that anybody out there thinks that Blake Griffin is this team's last move."

On his "Stein Line Live" Locker Room debut, @TheSteinLine discusses whether or not the Brooklyn Nets are the clear favorite to win the NBA championship this year. pic.twitter.com/3LxxVk7p46

The immediate comparison for Locker Room among current social apps is Clubhouse. Baker explained how the app works when it launched last fall:

Other reporters such as ESPN’s NFL insider Jeff Darlington have been early adopters of Locker Room, which allows a more casual conversation with fans rather than the more formal, time-controlled format of TV.

In Stein’s view, the important thing is to talk to fans when games are being played because that’s when the app has the most activity, in addition to creating a sense of immediacy. (Those who prefer to avoid the audio component can also participate through a chat room.)

Stein debuted this past Wednesday (March 10) and said that he plans to appear on Wednesdays and Fridays. (Maybe that’s a good idea to avoid Thursdays when TNT has a doubleheader and Inside the NBA.)

Will other sports reporters follow along? This could be an intriguing way to add some interest and interaction to upcoming regular-season Major League Baseball, for example.