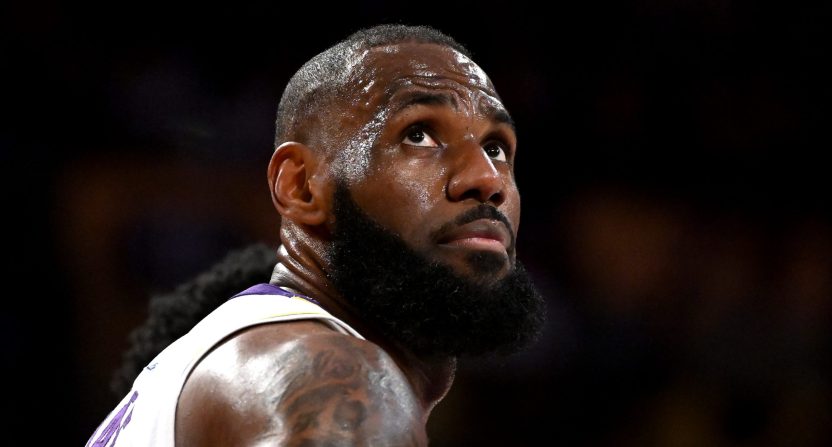 Perhaps the fine folks at Crypto.com should have waited a year or two before taking over the naming rights of the Staples Center because now they’re synonymous with the Los Angeles Lakers, which is not the ringing endorsement it once was.

Just two seasons ago, LeBron James and the Lakers were NBA champions. Now, their roster full of stockpiled veterans is getting booed out of The Crypt thanks to poor performances and a lack of anything resembling a cohesive strategy.

Even before Sunday night’s dreadful 123-95 loss to the New Orleans Pelicans, there’s been trouble in paradise playing out in the pages of newspapers, on local talk radio, and in online media outlets. Rumors of discontent between James and the Lakers’ front office have become commonplace. We’re long past the point of assuming where there’s smoke, there’s fire. We’re all watching the flames go up and it’s just a question of who tries to put them out first.

Last week, The Athletic’s Bill Oram published a story about growing tensions inside the organization. The opening line of the article stated that “LeBron James and the Lakers are heading for a divorce” and outlined the fractured relationship playing out behind the scenes where James and agent Rich Paul “grabbed hold of the Lakers organization and are now beginning to really squeeze.”

When asked about the situation between him and the team a few days later, James took some time at a post-game presser to bring up Oram’s article and try to throw cold water on the allegations.

LeBron said he "doesn't care about draft picks, only winning championships, & so does Rob Pelinka that's why he traded for AD" pic.twitter.com/jNzauYVkti

A lot is going wrong for the Lakers this season. On Friday, LeBron James blamed the refs, the front office and, uh, me. I wrote about that. https://t.co/LJ5YleIm2S

Of course, many of the things Oram noted in the article have been said elsewhere. And James himself seemed to have indirectly confirmed some of it in the ways he’s thrown shade at the Lakers’ brass in recent weeks.

Regardless, given that James has a massive following and the internet is the internet, people started coming for Oram online. And the only way that was going to stop was if LeBron walked things back.

Sunday night, after the crushing loss to the Pelicans, LeBron tweeted that he had a “candid conversation” with Oram, adding that while some of the things in the article were “untrue,” he realizes that the reporter is doing his job and working sources. He then asked Lakers fans to “let him be.”

@billoram and I had a candid conversation after the game tonight and I know he has a job to do. I know what he wrote wasn’t truthful cause it never came from me. But I get it, SOURCES run this game. Nevertheless #LakerNation let him be cause he ain’t a bad guy. ??✊??

It’s not hard to imagine that much, if not all, of what Oram reported will end up being revealed as true. All signs point to major changes coming for the Lakers organization, whatever that looks like. If James was hoping to squash media interest in the situation while the season is ongoing, he’s perhaps now realizing that simply isn’t going to be possible.