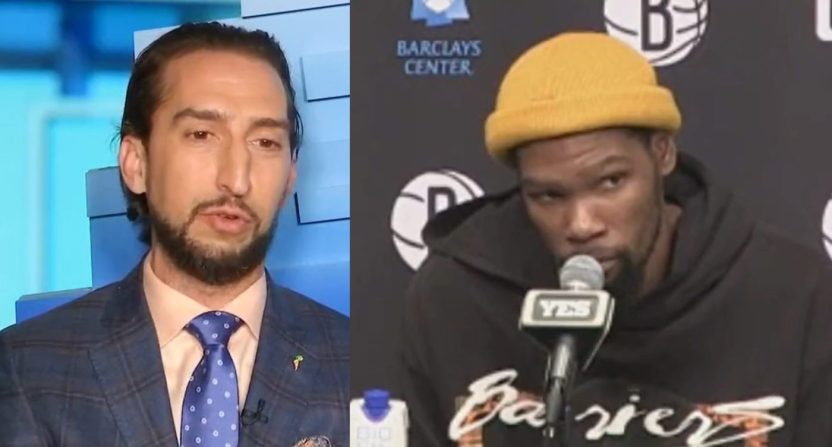 “Legit awful luck” seems extreme considering Durant is an NBA MVP winner and a two-time champion who makes more than $40 million annually on the court alone. And in true Kevin Durant fashion, the Nets superstar rejected Wright’s empathy by firing back on Twitter. “Don’t feel bad for the God. Life has been incredible little Nicky.”

Don’t feel bad for the god. Life has been incredible little Nicky ? https://t.co/fZ0jrPHXHm

Wright responded by asking what Giannis should be considered if Durant calls himself a god? For the second time in one night, Durant ripped Wright by answering that Giannis is also a god and the Fox Sports host could be one too, but he chose peasantry.

A god. Just like you are but u rather be a peasant https://t.co/ZSmUmhGl1D

Friday morning, on Fox Sports’ First Things First, Wright admitted his initial tweet was a little mean, adding that he enjoyed the social media discourse with Durant. “The whole thing’s fun,” Wright said. But then he went on to double down on his initial “mean” tweet!

"I've been upgraded from puppet to peasant! But KD responded bc what I said was true. Giannis is mirroring almost exactly what LeBron did to KD before he went to GSW – take his lunch money whenever they want." pic.twitter.com/OCNfvz1xkz

“KD responded because what I said was true,” Wright explained. “I’m sure he has a great life, I know he does…but as a competitor it’s gotta sting that someone who might end up being the 13th greatest player in the history of the game isn’t ever going to spend a single solitary year as the best player in the league.”

Durant has never been one to back down from addressing fan or media criticism on social media, having notably battled Stephen A. Smith and Skip Bayless on Twitter. Add Wright to the list, and this one might not be over after the Fox Sports host defended his tweet on national TV. Your move KD.