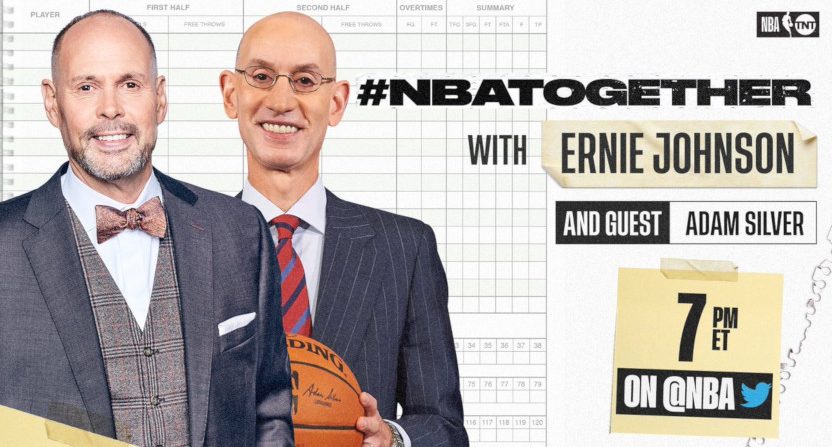 The NBA has rolled out some innovative streaming content during during the COVID-19 coronavirus shutdown, from daily interviews with players on Instagram to daily streams of classic games across social platforms to even concerts from musically-inclined NBA players. Now, they’re launching a twice-a-week talk show with Turner Sports’ Ernie Johnson interviewing special guests. The show will stream live at 7 p.m. Eastern each Monday and Wednesday on the @NBA Twitter account, beginning today with an interview with NBA commissioner Adam Silver:

Tonight at 7pm/et, a new social talk show hosted by TNT’s Inside the NBA host @TurnerSportsEJ, featuring high-profile guests from across the basketball community, will debut on @NBA.

Here’s more from a NBA release:

NBA Digital, jointly managed by the NBA and Turner Sports, will launch “#NBATogether with Ernie Johnson,” a new social talk show hosted by TNT’s Inside the NBA host Ernie Johnson, featuring high-profile guests from across the basketball community. “#NBATogether with Ernie Johnson” will stream on the NBA’s Twitter account (@NBA) Monday and Wednesday nights during the season hiatus as part of the new #NBATogetherLive initiative. Following each show, highlights and clips will also be available via @NBAonTNT Twitter account.

Johnson will be joined by special guests each episode and will take questions submitted by fan via @NBA Twitter. NBA Commissioner Adam Silver will be the first guest tonight at 7:00 p.m. ET, followed by five-time NBA All-Star and Portland Trail Blazers guard Damian Lillard on Wednesday, April 8. Additional appearances through the month of April include Toronto Raptors President of Basketball Operations Masai Ujiri, Naismith Memorial Basketball Hall of Famer and NBA Legend Kareem Abdul-Jabbar ahead of his 73rd birthday, among others.

This is a cool idea as a way to keep the NBA in people’s minds during this shutdown, and the initial guest lineup is certainly impressive. And Johnson’s a skilled interviewer and a beloved NBA figure, so he’s a great pick to host this kind of show. We’ll see what kind of engagement this draws, but it’s definitely a notable idea, and one that could wind up being pretty interesting.