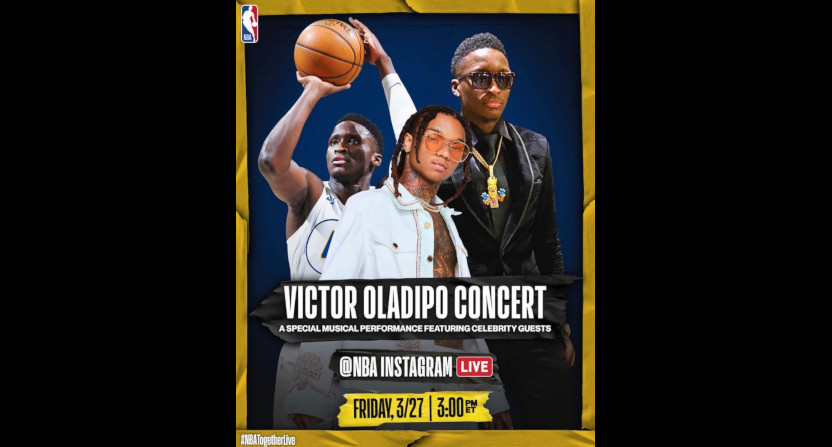 Like many other leagues suspended during the COVID-19 coronavirus pandemic, the NBA has been finding ways to show off its classic programming, from making League Pass free through April 22 to streaming classic games each night on their social platforms as part of a #NBATogether campaign. But that campaign also includes some other more unusual features, from the “Acts of Caring” charitable effort to the “Jr. NBA At Home” interactive series of drills for isolated kids to interviews with players, coaches and others on the NBA Instagram account at 3 p.m. Eastern each weekday. And today, the NBA’s going musical, turning their 3 p.m. Eastern Instagram interview into a live performance from Indiana Pacers’ guard Victor Oladipo (who was on Season 2 of Fox’s The Masked Singer) and special guests, including Swae Lee.

Tune in to watch me and some of my special celebrity friends on @NBA Instagram LIVE at 3:00pm/et Friday. #NBATogetherLive #Songs4UConcert #VO4 pic.twitter.com/mm6sjjR6Zt

After that, the NBA will be turning their Instagram over to DJ Derrick “D-Nice” Jones for one of his increasingly-popular “Club Quarantine” sets from 7-9 p.m. ET, which will “take fans through hits from great NBA eras like the 70s, 80s, 90s & 2000s.”

#NBATogetherLive brings you a special edition of @dnice’s #ClubQuarantine on @nba IG LIVE at 7:00pm/et TONIGHT!

It’s interesting to see the NBA emphasizing music-focused content this way, but it makes some sense. This is something different from just showing old games (and those looking for that can still find that content on the free-for-now League Pass; there’s also a live stream of Russell Westbrook’s 50/16/10 game April 2017 game on the NBA Twitter account at 8 p.m. ET, for those more interested in that), and there are still some connections to the NBA.

A performance from Oladipo is a different twist on the interviews we’ve seen, and a good way to show off his musical talents. And D-Nice’s Instagram sets have drawn a lot of buzz, so teaming up with him for one of those feels logical. D-Nice has had NBA connections in the past, too; he did an Instagram takeover for the Brooklyn Nets around a 2015 game, and he teamed up with Michelle Obama’s “When We All Vote” for a voter registration party this Wednesday; Oklahoma City Thunder guard Chris Paul is one of the co-chairs of that initiative.

But beyond that, the NBA has long drawn interest for its connections to culture, from music to fashion and more. The three-part LeBron James/Gotham Chopra Shut Up And Dribble documentary heavily focused on the league’s interactions with culture, and media outlets have often mixed in musical performances with their NBA coverage (including Bleacher Report featuring a Quavo performance at their NBA All-Star Game Crystal Court this year). So emphasizing music this way (and doing so in a very opt-in way; people can seek this content out on social media if they’re interested, but it’s not like it’s being put in the middle of a TV broadcast of a game, unlike Monday Night Football‘s ill-fated “Genesis Halftime Show“) makes some sense for the NBA. And it’s cool to see them trying something a little different with their digital content.