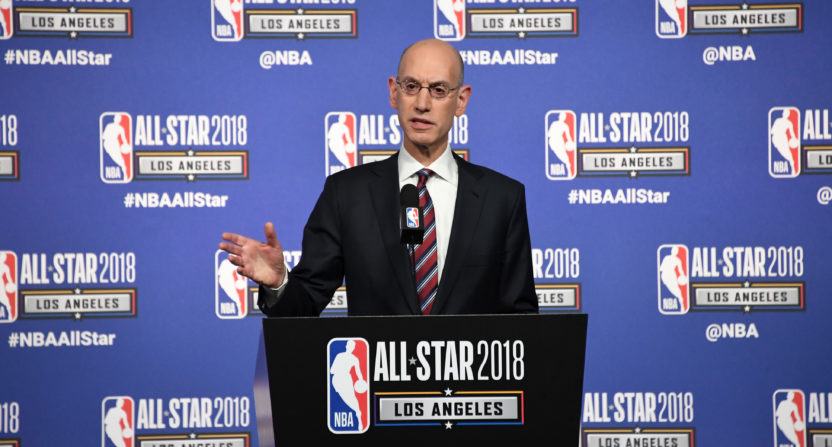 There’s no doubt that the NBA’s viewing numbers are down to start the year. There is plenty of room to debate why, with cord cutting and load management both coming under scrutiny, along with some unfortunate injuries blowing up some planned national interest games. The league is also considering fairly drastic measures in an effort to increase early season interest and to keep more teams competing on a nightly basis.Adam Silver went on the record yesterday at the Sports Business Journal‘s Dealmakers in Sports conference, and he directed blame at the current state of pay television, noting that the NBA is hit especially hard by any overall reduction in subscriptions.https://twitter.com/Ourand_SBJ/status/1202431168781664256Silver also claimed that cable and satellite providers had lost 20% of their viewers (rather than their subscribers) over the past four years.https://twitter.com/Ourand_SBJ/status/1202643173933223938

“Especially for the NBA, which is primarily a cable-satellite sport, that system is broken to a certain extent…It’s not just in terms of the loss of homes, but our young viewers, in particular, are tuning out cable, traditional cable.”“You’re really pushing a rock up a hill if you’ve lost 20% of your audience over the last four years…especially when that young audience we attract is disproportionately represented by that 20%.”

Silver’s point that the demographics of likely cord-cutters are aligned with the league’s viewing demographics is probably a good one. The NBA has also tried to find ways to get their content over-the-top, this year even offering NBA TV as a subscription option. As to how to fix it, though? That’s a bit tougher, although from Silver’s comments he clearly thinks the league needs to diversify its distribution. To that end, getting more games onto ABC seems like an option. The NBA opens up with a few months of games on pay television networks (locally and nationally), which is unique among the NFL, college basketball and football, and MLB.Mark Cuban expanded offered up a similar conclusion last week:https://twitter.com/mcuban/status/1199908455387144193And in an interview with Brad Townsend at the Dallas Morning News Cuban expanded upon that point:

I also saw that you were recently interviewed about the NBA’s TV ratings.

Cuban: We’ve got a challenge in that all of our games, until we start on ABC, are on cable. Which means if you cut the cord, you can’t see any of our games. That’s a challenge.

We’ll assume Cuban is ignoring subscribers of growing services like YouTube TV, who do still have access to games but don’t have a traditional cable or satellite package.

Q: Some of the reaction that I saw was that some read that as doom and gloom, but that’s not the impression I got from your comments.

Cuban: I don’t see that at all. It’s a challenge. It’s going to be hard to find the equilibrium, but that’s the innovators’ dilemma. Businesses go through that. The technology is changing. Streaming, who knew that it would be a big deal?

We are where we are. Kids, I forget the exact number, but the majority of homes with millennials and younger in the household, they don’t have traditional cable TV. And so the number of options for them to get our games is minimal and that’s going to hurt our ratings because other than MLS, we have the youngest viewing the league.

Cuban concluded by noting that working with the league’s broadcast partners to open things up for a wider audience would be in the league’s interest.

Q: So what is the workaround?

Cuban: That’s the thing we have to work out with our broadcast partners. Now, if they open it up for streaming, that makes life easier. That’s a big discussion for everybody, though. We don’t have a solution yet, but soon we’ll have more games on ABC.

I think one of the things is you’re seeing more and more college games that were on weekends go to ABC and broadcast television throughout the week. I think as that happens more, that solves the problem. So I guess the real answer to your question is that once we start having games on broadcast television then things should pick up significantly.

Between Silver and Cuban, it’s pretty easy to see where the league would like to go: more games, more widely available on platforms that don’t require a paid subscription. Considering the NBA was in many ways the leader in embracing cable, putting the All Star Game on TNT starting in 2003 and still airing the majority of playoff games on cable networks as well, it’s a bit odd to see league leadership pointing out the flaws with the approach.That’s what adjusting looks like, though, and it represents the league coming to terms with the fact that chasing a young audience means chasing a different audience all the time.[SBJ/Dallas Morning News]Updated to clarify Adam Silver’s comments about cable and satellite declines.