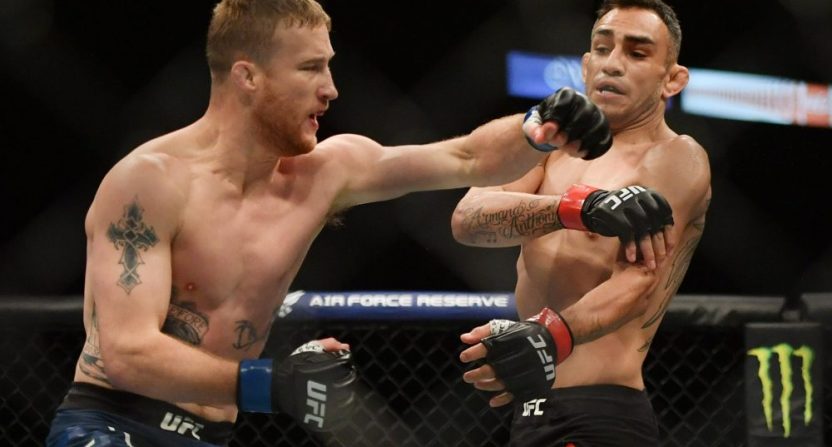 Over the weekend, we finally got a live sports event with the UFC 249 PPV, available on ESPN+ with prelims on ESPN proper. On Monday, John Ourand of the Sports Business Journal reported that the PPV drew over 700,000 buys, quite a strong number.

How much the event cost depends on how you want to look at it. UFC 249 itself cost $64.99, but purchasers needed a $4.99/month ESPN+ subscription to purchase the event in the first place thanks to a $300 million per year deal signed last year between the UFC and ESPN that made the Worldwide Leader its exclusive PPV provider. In addition, ESPN offers a package costing $84.98 to new subscribers, giving them a year of ESPN+ and the UFC PPV they want to watch. Given 700,000 PPVs at the lowest cost of $64.99 and not including any ESPN+ fees, that’s a cool $45 million in the pocket of ESPN, taking care of 15% of the yearly PPV payment to the UFC in one fell swoop.

But is 700,000 a “good” number? It depends on your interpretation. A year ago, UFC 236 on ESPN+ reportedly couldn’t even crack a six figure buyrate. In January, UFC 246 was estimated to have drawn around a million buys by Disney’s Bob Iger (despite earlier reports stating it was around the “equivalent” of two million buys, whatever the hell that is supposed to mean). In 2018, the UFC’s final year on “traditional” pay per view, just two events drew even 400,000 buys – Conor McGregor’s loss to Khabib Nurmagamedov at UFC 229 (which drew a record 2.4 million buys) and Jon Jones’ second successful title defense against Alexander Gustafsson at UFC 232 (700,000 buys). UFC 235 in March of last year, featuring Jones’ win over Anthony Smith, was the final PPV not available exclusively on ESPN+, and drew a reported 650,000 buys. Buyrate information about the ESPN+ pay per views, aside from the first one and January’s McGregor fight, has been sparse.

So with all that information, I’d say that yes, 700,000 is a rampant success for the UFC and ESPN. Given that Justin Gaethje had never main evented a PPV, and that Tony Ferguson’s one PPV main event came way back in 2017 (UFC 216 vs Kevin Lee, which drew 200,000 viewers), expectations based on star power alone couldn’t have been high. And even though we’re in a pandemic with no live sports and fans are desperate for action, expecting a McGregor-esque number for this card (as “stacked” as it was hyped up to be, it lacked the starpower and consequences as say, UFC 100) would have been silly.

The UFC has not yet announced its next PPV. It has cards both this Wednesday and Saturday, which will be available on ESPN and ESPN+.