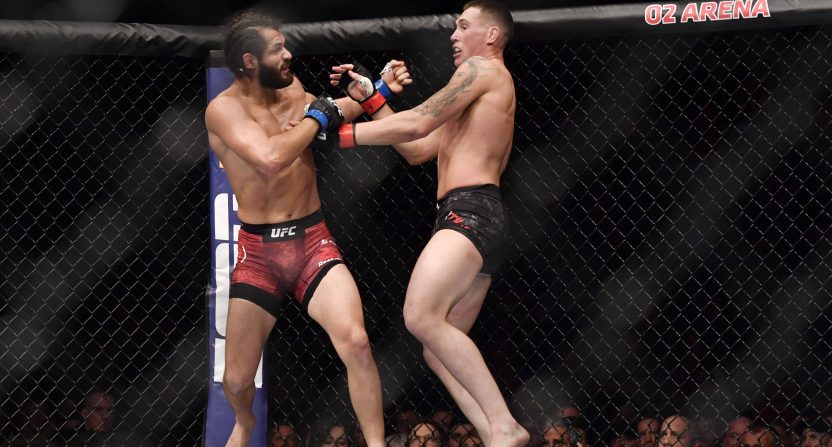 The UFC is showing a lot of confidence in ESPN+ just three months into the multi-year pact between the two companies. On Monday, the UFC announced that ESPN+ would be the exclusive provider of pay-per-view events in the US going forward, cutting out the cable or satellite middle man (and other outlets that previously offered UFC PPVs, like Amazon).

UFC Pay-Per-Views are now available for purchase exclusively through ESPN+ (US Only).

John Ourand of the Sports Business Journal has more on the agreement, which includes a two-year extension to the previous deal between ESPN and the UFC and is worth a reported $300 million per year.

UFC is going deeper with its ESPN relationship, agreeing to allow ESPN+ to become the MMA outfit’s exclusive PPV provider, while also extending its media-rights deal by two years. ESPN does not plan to sell UFC PPVs through other distributors like In Demand or DirecTV (though UFC will sell PPV rights for bars and restaurants). Neither UFC nor ESPN would comment on how much ESPN is paying for the exclusive PPV rights or how the revenue cut between the two looks. But it is known that in a good year, the UFC brings in around $250M in PPV revenue through its 12 telecasts, given that UFC takes roughly 60% cuts of the revenue from its deals with distributors. It is not likely that UFC would allow its PPV revenue to drop far from that figure.

As part of the agreement, ESPN and UFC have extended their rights deal by two years in a pact believed to be worth $300M per year — the same annual amount from the original deal (a five-year, $1.5B agreement). Both the rights deal and PPV deal run through ’25. “The vision that we have right now for the sport and for the brand is exactly the direction that ESPN is going,” said UFC President Dana White. “We are completely aligned in everything that we’re working on and our plans for the next seven years.”

Yep – PPVs available only on a streaming service, and you have to pay the same amount you were (in addition to the monthly ESPN+ cost). Awesome.

SBJ also notes that the events will cost $59.99, and new subscribers to ESPN+ can instead cough up $79.99 for a year of the streaming service and the one PPV.

In an interview with the Washington Post, UFC president Dana White touted the deal (of course) and noted that everything will now all be in one place.

“ESPN has all the big [sports] properties . . . and the fan is accustomed to waking up and watching ‘SportsCenter’ or going on ESPN.com,” he said in a telephone interview Monday. “We’ve aligned the fan, and now there’s no mystery about where to find UFC. It’s all housed in one home.

“We were all over the map” under UFC’s previous television contracts, White added. “It’s a one-stop shop at ESPN. Everything will be on ESPN.”

Keep in mind that UFC Fight Pass is still a thing that exists in its own little world, except you’re not getting any new, exclusive UFC content on the platform (aside from maybe some PPV prelims, which means….ESPN+ isn’t a one stop shop like White and ESPN are claiming).

The UFC will still be handling the sale of its pay-per-view rights to bars, restaurants, and internationally, which is probably a relief to those managers that were briefly worried about how in the hell they were going to stream ESPN+ to 40 TVs at their sports bar.

This seems like an incredible gamble to me from both sides. Is White going to lose his shit and start complaining about ESPN the moment there’s a technical issue during a PPV that prevents fans from watching? Is ESPN going to regret handing the UFC this much money if they’re struggling to draw 200,000 paying customers for these events? Fans are clearly going to be upset if there are issues with lag, picture quality, or they have problems ordering the PPV cards. To me, the negatives of this deal (especially the “exclusive!” part of it, which is a slap in the fans to fans who don’t have reliable internet access or don’t have a smart TV/streaming device for whatever reason) far outweigh the positives.

In fact, the biggest positive is money – sweet, sweet money. ESPN has the potential to make their money back plus more if they’re able to average around 400,000 buyers (and monthly subscribers) for each of the 12 UFC events. The UFC is getting cost certainty if PPV buyrates continue to dwindle, and they still get to take advantage of commercial and international sales. The only loser is the fan, who is now forced into one way to purchase and watch UFC PPVs for the foreseeable future.