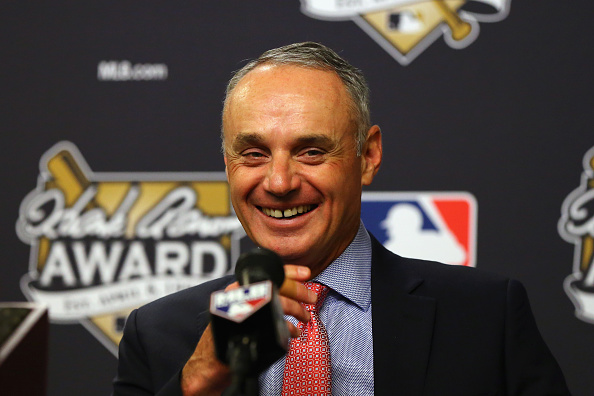 Yet another entity has been added to the never-ending list of potential bidders for the 22 Fox regional sports networks, and this time, it’s a league that provides a lot of the content on those RSNs. That would be Major League Baseball, going by comments MLB commissioner Rob Manfred made in an interview with the JohnWallStreet blog. Here’s the key part of that discussion:

JWS: The Yankees are going to re-acquire control of the YES Network. The Cubs have discussed doing the same in 2020. Does MLB want its teams to control their broadcast rights? Does the league care who ends up buying the other 21 Fox RSNs?

Manfred: We’re very interested in the RSN sale process and have preferences in terms of who the owners are going to be. Candidly, we’re looking at the RSNs ourselves.

Manfred: Yeah, I think that content is going to continue to increase in value as we move forward. It may be different bidders, different companies that are involved, but I think the most important point is that content has durable value.

“Looking at the RSNs ourselves” is far from a strong indication of commitment to a bid, especially as the deadline for the first round of bids to buy these from Disney has already passed (with only Amazon, TV station owners Sinclair and Tegna, and three private equity firms making official bids for all 22 networks). But there’s been talk that Fox in particular could still get involved in buying back their old networks, and Comcast and other cable providers might have interest too, especially if the networks are sold off piecemeal and the providers can bid on just the ones that fit with their territories. So MLB could conceivably still get in on this bidding if they wanted to.

The idea of MLB ownership of this entire RSN package is quite interesting. Given the amount of bidders here and the likely high price, this would be a major investment, and it would significantly shift the business model for many clubs. Instead of just getting paid a rights fee by a RSN, they’d own the RSN, and thus make money off its per-subscriber fees and its advertising (but have to pay its production costs and overhead). And while these networks aren’t entirely baseball-focused, a lot of their value is from baseball; controlling both the product and the distribution channel can be advantageous.

Now, there are a lot of different ways that could work; MLB or its teams could conceivably leave the operation of the networks to established sports networks (either with minority shares or on a contracted basis), as owning and operating your own network doesn’t always work well in practice (hello, Pac-12!), or they could do it themselves (the league has experience from MLB Network, and teams like the Yankees have essentially owned their own networks in the past), and they could even still pay substantial rights fees from the networks to the clubs (YES previously did exactly that, and was held as a sister company to the Yankees rather than a subsidiary). But what’s perhaps most notable there is that buying the RSNs wouldn’t just be a bet on rights fees continuing to rise (something Manfred indicates he believes in his second answer above), but a bet on those rights actually being profitable for the buyer.

It’s far from certain that MLB will make an actual bid for all 22 RSNs, but if they did somehow manage to acquire them, that would give them a whole lot of control over where and how their games are televised. (And it would make it a lot easier to do cross-RSN initiatives, such as in-market streaming, and would also give the league a whole lot of control over over-the-top options; if MLB controls both the local rights and the national rights, that could potentially allow for MLB.tv subscription levels that ignore in-market blackouts.) And it would be a bold bet on the long-term future of their local TV product. Or, alternatively, it can be seen as avoiding an owner they really don’t want; Manfred’s “we have preferences in terms of who the owners are going to be” is an interesting comment, and maybe MLB only dives in to this sale if it’s going a way they don’t want. It’s not clear what those ownership preferences are, but it’s significant that they have them.

It’s also possible that a MLB acquisition of RSNs could happen on a smaller scale. As mentioned in the piece, teams like the Cubs and Yankees have already talked about trying to buy (or buy back) their RSNs. Maybe the national MLB office teams up with them and other teams that want to do that and they pick up some, but not all, of these RSNs. Or maybe MLB does decide to dive in and get the whole package. We’ll see how it all shakes out, but it’s definitely interesting to hear Manfred talking about MLB looking at bidding for these networks.