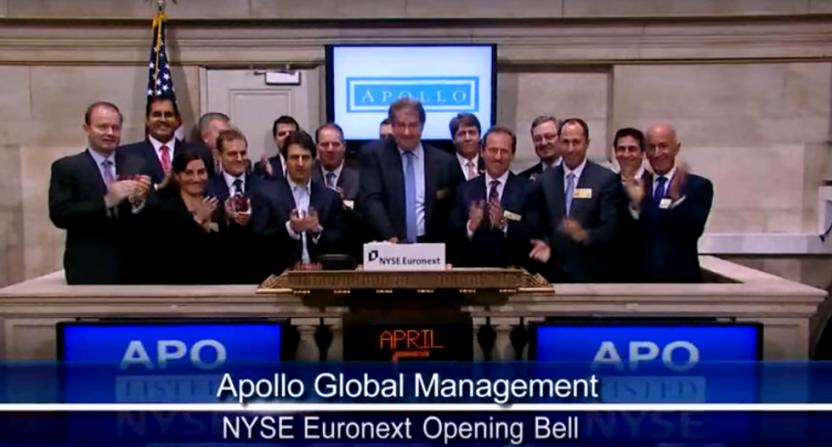 The bidding war for the 22 former Fox regional sports networks goes on, with the latest wrinkle being Amazon going from rumored bidder to confirmed bidder. But they’re only one of many players involved; as per CNBC’s David Faber, private equity firms Apollo Global Management (their management’s seen above ringing the NYSE bell in 2011), KKR, and The Blackstone Group all submitted first-round bids for the whole package of networks. (Sinclair and Tegna, which both owns numerous local broadcast stations, also submitted first-round bids for all the networks, and while Fox didn’t bid to buy these back in the first round, there’s talk they could get involved later.)

It’s far from certain who will wind up on top in the end, but with three out of the six current bidders private equity firms, it’s worth talking about possible implications for consumers if one of them winds up owning the whole package.

Most U.S. sports networks at this point are owned either by large media companies with a significant TV portfolio (including Disney’s ESPN/ABC/SECN, Fox’s FS1/FS2, NBC Universal’s NBCSN and the NBC regional networks), by cable or satellite companies (including RSNs owned by AT&T, Charter, and Cox), or by teams/team parent companies/leagues (including MSG, NESN, Altitude, MASN, Pac-12 Networks). Of course, some of those lines are blurry; AT&T’s purchase of Time Warner means they’re now firmly a media company as well, and teams or leagues have smaller stakes in many of the networks owned by media or cable companies. But a private equity owner would likely be different from these existing owners on a few fronts, possibly including everything from staffing to shoulder programming to in-market streaming and carriage disputes.

Some discussions of private equity firms buying properties hinge on “they’ll just be in it for the money!” arguments, but those aren’t particularly fair; media companies and cable companies are trying to make money off their RSNs too. The more notable distinction is that a private equity buyer would likely be focused on maximizing the profits of just their RSN package (whether that’s all 22 or a smaller grouping) and wouldn’t have other interests in the space.

Back when Disney was buying these RSNs (technically, they did buy them, but are now forced to sell them by the Justice Department), the discussion was about potential synergies with ESPN and their streaming efforts (in everything from personnel to carriage negotiations to streaming bundles); if Fox gets them back, they have synergies with FS1 and the Fox broadcast network. If another cable or satellite company came in (none are listed as bidders right now, but that could change, especially if these wind up being sold in smaller packages where those providers could pick up just the RSNs in their key territories), they’d have synergy with their TV packages, while Sinclair could have overlap with their local stations, and if Amazon gets these, they can tie it in to Amazon Prime and Prime Video. And the teams that majority-own their RSNs have clear synergies with those teams’ ticket sales, merchandising, and more.

For an equity firm, there’s less obvious overlap, and that’s what’s led to quotes like Liberty Media’s Greg Maffei saying “The logical owners of the RSNs are either a big distributor or a big content owner.” (Liberty owns the Atlanta Braves, F1, Charter and Viacom, but is not currently listed as a RSN bidder, although Maffei says “we would take a look.”)

If an equity firm does come out on top, that could lead to several significant differences. For one, companies with other interests in the space don’t necessarily have to maximize the short-term bottom line of a RSN or RSNs, as they can consider impacts to the other properties in their portfolio.  (There’s been plenty of discussion of Amazon’s video content as a loss-leader to get more Prime subscribers and get more people to buy other things from them, and the same logic can be applied to media or cable companies, albeit on a  lesser scale.) If option A makes $2 million for a RSN alone and option B produces $1 million for the RSN and $2 million for something else, you’re going to see equity companies choose option A and other companies choose option B (as long as the “something else” is also owned by them). Thus, equity companies are likely going to be thinking more about the RSNs’ bottom lines alone.

That could create all sorts of potential impacts. One might be in staffing; we’ve already seen cutbacks at many of these RSNs under Fox, but those might go further under an equity firm even more focused on the individual networks’ bottom lines, especially if that leads them to take an approach of going bare-bones except for live game coverage (or maybe even reducing the numbers of people involved in live game coverage). Private equity ownership has taken that approach with a bunch of newspapers, including The Denver Post and Canada’s Postmedia chain. And that obviously has effects on not just the staffers involved, but those who watch the programming in question. Also, speaking of coverage outside games, an equity firm with RSNs might fill hours with whatever programming they can get cheap instead of the current approach of Fox national programming (which is what current management of these RSNs can get cheap), part of what makes Apollo’s reported effort to court LeBron James and Uninterrupted intriguing.

Beyond that, carriage negotiations might get even uglier, as there’s perhaps less potential for deal-making with an equity firm that only owns RSNs. (They’re league networks rather than a RSN, but the Pac-12 Networks’ carriage struggles are possibly instructive here; part of their issue has been that without a network or distributor equity partner, it’s harder to make carriage deals.) In some cases, maybe the per-subscriber fee gets boosted and the number of carriers with the RSN drop, leading to those who really want the games on that network having to possibly change providers and also pay more for the channel each month. And renewing in-market streaming might face even higher hurdles than it already does; an equity owner might be less interested in providing that option (and it could be more costly for them to do so, as they’d presumably have to pay a third party to handle the streaming). So there could be less options to watch for even those who do get the network on TV.

All equity firms aren’t equal, of course, and it’s quite possible that an equity firm that comes out on top here takes a different approach to maximizing value. Maybe they invest heavily in RSN content and try to make money by providing a more local version of an all-hours sports network that more people watch outside of games, or maybe they maximize carriage instead of per-subscriber fees and we don’t see nasty carriage fights. But whichever approach is eventually taken, it seems likely that a private equity owner will operate RSNs in a very different way than what we’ve seen to this point. And with two-thirds of the confirmed bidders so far falling into that private equity camp, it’s worth pondering what that could look like.

Correction; this originally put Tegna in the private equity camp, but they’re a station owner, spun out of the old Gannett.