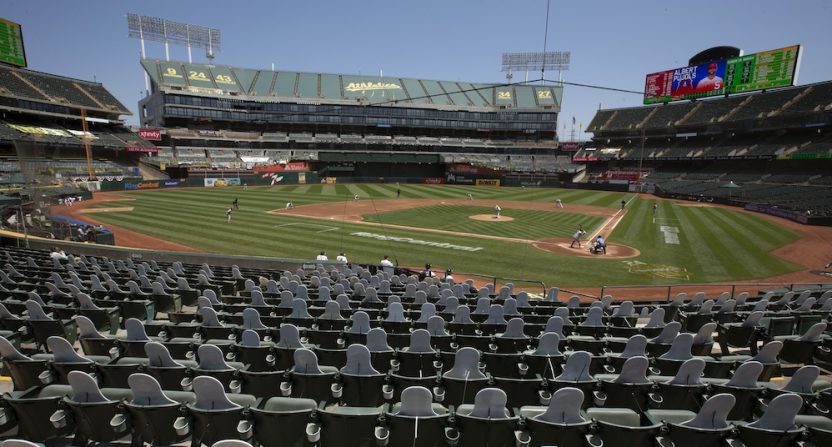 Throughout the COVID-19 shutdown, many businesses in a variety of fields have taken the opportunity to downsize operations that were likely being considered before the pandemic. Employees have been laid off, offices have become remote, expensive practices have been reduced or eliminated. Many of these changes could become permanent.

This could happen in sports broadcasting, as well. For Major League Baseball telecasts, fewer cameras and operators are on hand to televise games. Less staff is required for production. Announcers are broadcasting from remote locations. These changes have many in the industry concerned about their jobs.

As Kevin Draper reports in the New York Times, most of these changes are resulting from a single feed — or “world feed” — being used for baseball broadcasts. That eliminates the need for coverage and production tailored to a home team’s broadcast.

For instance, an Atlanta Braves telecast might stay with Freddie Freeman rounding the bases after hitting a home run or show Braves fans cheering in the stands. A Mets broadcast would likely show the pitcher that allowed the home run or the manager contemplating making a change.

Think about how much a local broadcast shows fans in the stands, someone who’s excited or bored, or wearing an outlandish outfit.

Related: Multiple reports suggest local MLB announcers may call road games remotely this year, if there is a season

Both can influence the energy an announcer might demonstrate on a particular call, in addition to the lack of fans in the ballpark. Listen to Karl Ravech’s call of Matt Olson’s walk-off home run for the Oakland Athletics against the Los Angeles Angels Friday night:

This is what a walkoff grand slam sounds like with no fans pic.twitter.com/1r7OQZmvHR

Some might fault Ravech for his flat delivery of an exciting moment, but he wasn’t in RingCentral Coliseum for Olson’s home run. Nor were analysts Eduardo Perez and Jessica Mendoza. The three couldn’t feed off each other’s energy, nor the atmosphere of fans celebrating a game-winning home run.

The “world feed” also made the moment bland by focusing on both sides with Olson rounding the bases and Angels pitcher Hoby Milner walking off the mound in defeat.

An NBC Sports California telecast would probably have a cameraman on the field following Olson. Other cameras would show the A’s running out of the dugout and fans high-fiving in celebration. The Fox Sports West field would probably show Angels players emptying their dugout to the clubhouse. Maybe a sad Angels fan in the stands.

“‘When you are the home team, you command 10 cameras,’ Filippelli said. ‘That’s why those two cameras are so critical, so you are not just mirroring’ what the home feed puts out.”

The ones who will lose out most if a bland, “world feed” broadcast becomes permanent are the freelance crew who regional sports networks often hire, especially to provide local perspective for a road telecast.

Draper’s article includes plenty more from technicians, freelancers, and executives facing tough questions about the future of regional broadcasts. What if networks decide that announcers, directors, producers, and crew don’t need to travel on the road?

Worst of all, what if fans settle for the bland visuals tailored to both fanbases watching and don’t necessarily miss a broadcast leaning toward their rooting interests? Finances will certainly be the ultimate factor in any decision, but viewers may have an opportunity to exert some influence here if they express dissatisfaction or watch less.