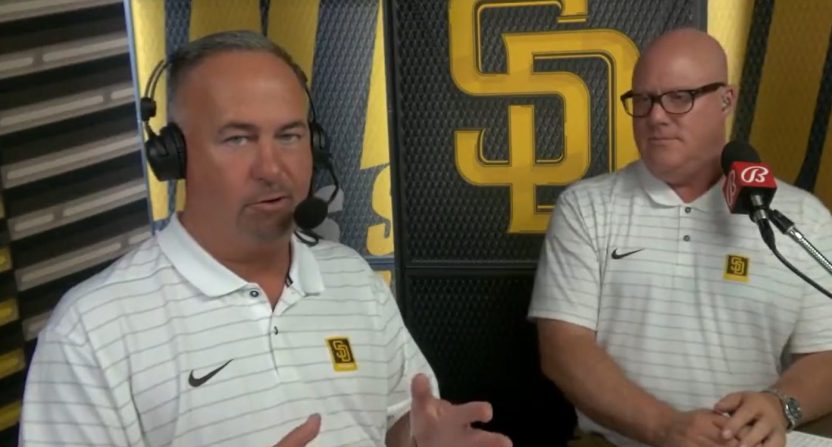 It’s not an overstatement to declare Vin Scully the best announcer in the history of sports. Thankfully, he was gracious enough to share broadcasting advice with anyone who sought it, and that included some names famous in their own right.

Scully passed away on Tuesday at the age of 94. As the news broke, it quickly dominated the sports world and Major League Baseball broadcasts around the country. During the Bally Sports San Diego broadcast of the San Diego Padres‘ game against the Colorado Rockies Tuesday night, play-by-play voice Don Orsillo spoke about Scully’s passing and shared that it was the legendary Dodgers broadcaster who advised him to take the San Diego job.

“He told me to go to San Diego,” Orsillo admitted to analyst Mark Grant and the entire audience. “After my experience in Boston had ended there, I had reached out to him because I needed advice. I was kind of at a crossroads personally in my career, not sure what to do. I had worked with one team in one city for 15 years and he said, ‘You need to go to San Diego, you’ll love it there.’ And he was one hundred percent right. One hundred percent.”

After 15 years with the Red Sox, Orsillo was unceremoniously let go by NESN in 2015, a controversial decision that still gets bemoaned by Boston fans. Orsillo rebounded quickly, landing in San Diego where he succeeded legendary announcer Dick Enberg as the Padres’ play-by-play voice. Just as Red Sox fans did, Padres fans have relished Orsillo’s talent, and they have Scully to thank.

Moving to San Diego wasn’t the only advice Orsillo sought from Scully, however. He said he was lucky to use the late broadcaster as a sounding board throughout his career.

“I remember going to him, he was doing Saturday baseball on NBC when I was an intern, 1989,” Orsillo said. “He was pumping me up then, he was like, ‘What do you want to do?’ And I said ‘I want to do this!’ I couldn’t have been further as an intern, I was 19. I told him what I wanted to do and he helped me then, he helped me after I got into the big leagues, and then helped me with the decision to come here.”

According to Orsillo, if you go around the league, you’ll find that nearly every MLB broadcaster has a story similar to his. He said Scully not only served as a hero to aspiring announcers, but a mentor as well.

“There’s 30 of us in the big leagues right now and I guarantee you, all 30 play-by-play guys and 30 analysts in Major League Baseball have a Vin Scully story where he helped you,” Orsillo said. “That’s just the kind of guy he was.”

Following Scully’s passing, his legendary calls, famous stories and iconic legacy will live on. Thanks to his gracious nature, broadcasters around the country will continue to enter the booth with pieces of advice from Scully, and hopefully, they’ll continue to share that wisdom with the announcers who succeed them.