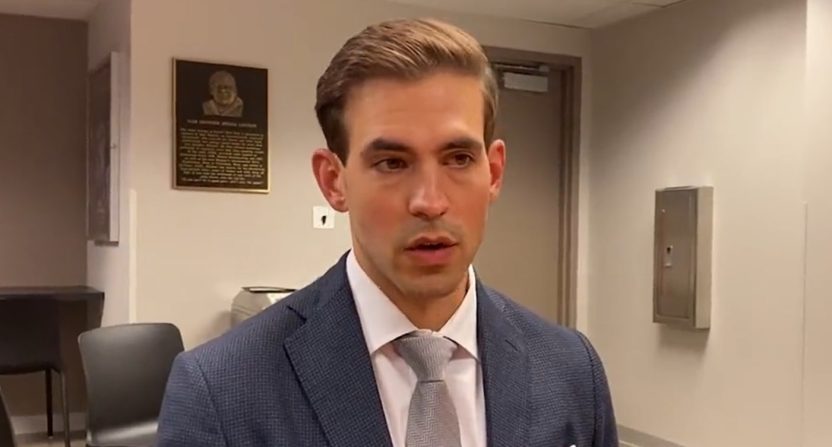 In 2017, Joe Davis earned the seemingly impossible task of replacing Vin Scully as the TV play-by-play voice of the Los Angeles Dodgers. But the job became even more difficult Tuesday night, as Davis was tasked with informing the Dodgers audience that their beloved broadcaster Vin Scully had passed away at the age of 94.

The announcement occurred as the Spectrum SportsNet LA broadcast returned from a commercial break for the bottom half of the fifth inning.

“It’s with heavy hearts that we pass along some really tough news. At the age of 94, Vin Scully has passed away,” Davis said before a brief moment of silence on the broadcast.

Despite the Dodgers being involved in a close matchup with their division rival San Francisco Giants on the field, the game became secondary as Davis and analyst Jessica Mendoza spent much of the broadcast paying tribute to Scully.

“We had known for a little while that he was not doing great,” Davis told Jorge Castillo of the Los Angeles Times after the game. “You can kind of prepare mentally for it, I guess, But I think with anything like this, until it actually happens, you don’t really know what you’re going to say or how you’re going to say it.”

Dodgers play-by-play broadcaster Joe Davis to @jorgecastillo on announcing Vin Scully's death: "I tried to do my best to pay tribute to the guy I consider the greatest ever to do it.

"I said on the air tonight, will say forever that there never will be another one like him." pic.twitter.com/B91kDUab6C

During the broadcast, Davis told the story of his first interaction with Scully, in which the legendary broadcaster attempted to call his eventual successor to congratulate him on getting the Dodgers’ announcer job.

“So 2015, when I get the Dodger job, the day that it’s announced, I get a call on my phone from a number that I don’t recognize and I let it go to voicemail,” Davis said. “Whatever. No message left. The number calls again — who knows who this is. Finally, voicemail pops up. ‘OK, who is this?’ I didn’t know if this was a writer trying to break the story or something. I wasn’t supposed to answer. So I listen. ‘Who is this?’

Dodgers’ broadcaster Joe Davis tells the story of how he accidentally ignored a phone call from Vin Scully shortly after he got the job as the Dodgers’ new play-by-play announcer in 2015. pic.twitter.com/d249OzgNID

“‘Hi Joe, it’s Vin Scully.’ I just ignored Vin Scully’s call twice, sent it to voicemail twice. He said, ‘I tried you earlier in the day. I guess I began our relationship oh-for-two.’”

Davis later shared the best advice he received from Scully, and it was the same advice Scully once received from Red Barber. “Be yourself.” Which sounds simple, but it’s especially important in baseball, where the games are every night and the audience will quickly learn if a broadcaster is trying to be something they’re not. And over the course of his 67 years as a broadcaster, every sports fan was granted the opportunity to learn exactly who Vin Scully was as a person.