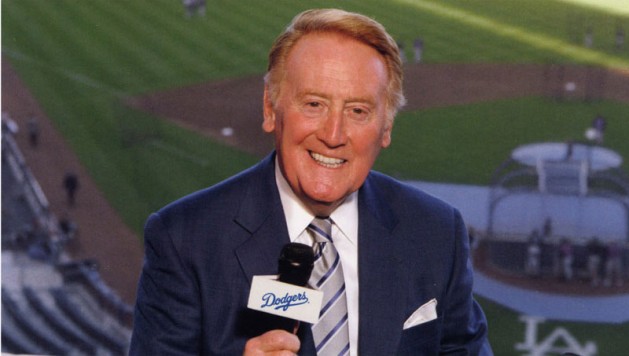 The sports world lost one of its greatest icons on Tuesday. Legendary announcer Vin Scully passed away at the age of 94.

The Los Angeles Dodgers — who Scully called games for until his 2016 retirement — announced the sad news on Twitter on Tuesday night.

There will never be another Vin Scully. You will be forever missed. ?? pic.twitter.com/WyTmXsati5

As was the case with the passing of fellow icon Bill Russell, ESPN paid tribute to Scully. That included a tribute on SportsCenter as well as from Jeremy Schapp.

A life well lived. A voice for the ages. pic.twitter.com/wuHARYsZSF

Scully began announcing games for the Dodgers in 1950, when they were still in Brooklyn. He followed the Dodgers across the country to Los Angeles in 1958 and remained their announcer for nearly 60 years in California, until he retired after the 2016 regular season.

Poetry from the greatest. Vin Scully calls the final inning of Sandy Koufax’s perfect game. One of the best at setting the scene, letting the moment breathe. A master at work calling a fellow master. https://t.co/m7bC5LS0vw

It was only right that Vin Scully was on the call when Hank Aaron broke the all-time home run record pic.twitter.com/PeG4CsNv6m

You can’t tell the story of baseball without Vin Scully pic.twitter.com/PBq5el6vwB

Truly one of a kind. Rest In Peace, Legend ? pic.twitter.com/S70sqiovPc

He called other sports, too. In January of 1982, Scully was the announcer for CBS and called one of the NFL’s greatest moments, when the San Francisco 49ers defeated the Dallas Cowboys in the NFC Championship Game, punctuated by “The Catch” from Dwight Clark.

When many people think of Vin Scully, they naturally think of the Dodgers.

But one of his greatest calls comes from the 1981 NFC Championship in what became known as “The Catch”.

Vin barely says anything, lets the moment speak for itself. @49ers pic.twitter.com/FToLgHgGln

Scully made a massive impact on the sports world. And as the news of his passing broke, many paid tribute to the iconic voice of so many great moments, honoring both his skill as an announcer and his magnetic personality.

Heartbroken. Our game has lost its Voice. https://t.co/3MnenRQ8dx

The greatest baseball broadcaster who ever lived, Vin Scully, has passed away. It was an honor just to know him. He demonstrated that language still matters and forged an intimate bond with his listeners that the rest of us can only strive to achieve. The Renoir of broadcasters.

This is a devastating, devastating day for the city of Los Angeles and the world. Vin Scully was the greatest broadcaster who ever lived. And he was as kind in real life as he was on the air. My thoughts are with his family and everyone who loved him,

Vin Scully, the voice of the Dodgers spanning multiple generations, has died, the team announced. An unspeakable loss.

Vin Scully, legendary Dodgers broadcaster, has died at the age of 94.

RIP to an icon ? pic.twitter.com/hRMFHY6gOO

Vin Scully was a storyteller, and nobody ever told the story of baseball better. He called games with such elegance and grace. He spoke only when necessary, allowing the broadcast to breathe when it demanded. He made baseball a more beautiful game. RIP. https://t.co/cmQ2nGJW3Y

What’s so remarkable about Bill Russell and Vin Scully is how many generations they impacted. Been struck by how many decades each man continued to reach those who watched and listened and learned. Lives lived in such exceptional fashion.

The voice of our game.

Vin Scully's passing is the end of a chapter of our city's history. He united us, inspired us, and showed us all what it means to serve. Our City Hall will be lit up for you tomorrow Vin, our dear friend, the Voice of LA. Thank you from a grateful and loving city. #vinscully

Scully was honored by the Baseball Hall of Fame with the Ford C. Frick Award in 1982, received the Commissioner’s Historic Achievement Award in 2014, the Presidential Medal of Freedom in 2016, has a star on the Hollywood Walk of Fame and was honored by the Dodgers with a retired microphone.