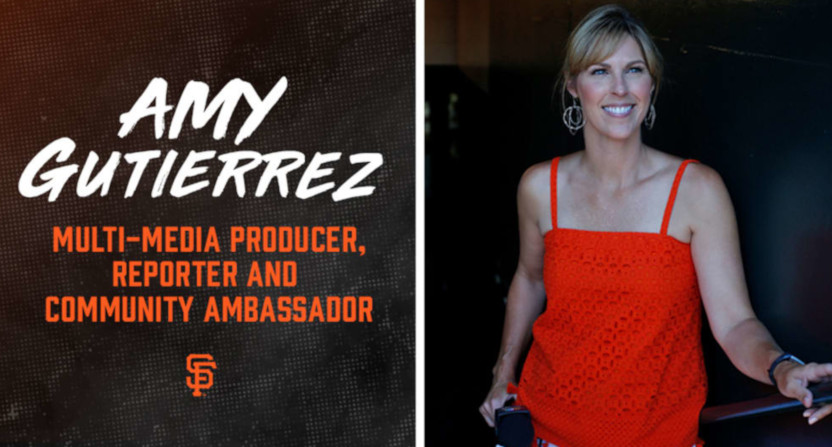 NBC Sports has been making a lot of cuts over the last year, from their digital sports sites to people at their regional networks. The regional network cuts have hit reporters particularly hard, with Kevin Kinkead reporting at Crossing Broad in August that NBC Sports Regional Networks “will be doing away with sideline reporters entirely, once the current basketball and hockey seasons are over” and “moving away from in-game reporting that takes place outside of the broadcast booth.” And reporter cuts have been a big thing for NBC Sports Regional Networks, both on-air and digitally: those August cuts included Phillies’ field reporter Gregg Murphy, Celtics’ sideline reporter Abby Chin, and many digital reporters, while Sixers’ sideline reporter Serena Winters was let go in October and Bears’ reporters JJ Stankevitz and Cam Ellis and Blackhawks’ reporter Scott King were let go in January. The latest notable cut there is Amy Gutierrez, the long-time field reporter for NBC Sports Bay Area’s San Francisco Giants broadcasts; Gutierrez tweeted about the network electing not to renew her contract Tuesday, and mentioned that she’s now found a new role with the team.

That announcement notes that Gutierrez will now be a multimedia reporter and producer for the Giants themselves. While she won’t be on the broadcasts now, she’ll still be interviewing players for the Giants’ digital platforms, and she’ll still be working with long-time announcers Mike Krukow and Duane Kuiper. And that feels like a smart move from the team; Gutierrez has been a hugely-recognizable part of Giants’ coverage for so long, and has been renowned for her interviews with players and her ability to get good comments out of them, so it makes sense for them to keep her around even after NBC decided to move on (which is likely more about this apparent corporate push to move away from in-game reporting, and also digital reporting, than it is about anything in particular with her; it does not appear that they’ll be replacing her on their broadcasts). Here’s more from MLB.com’s Maria Guardado on team comments about bringing in Gutierrez:

“For two decades, Amy has served as a key link between our fans and the Giants through her exceptional work on our broadcasts and in the community,” Giants president and CEO Larry Baer said in a statement released by the team. “We are delighted that Amy will bring her storytelling talents to the Giants and will continue to expand her reach to Giants fans everywhere.”

This is also interesting as part of a larger trend of established media outlets letting go of talented people and teams then bringing them in to produce in-house content. We’ve seen that a lot over the years, particularly with MLB.com hiring beat writers and many leagues and teams in other sports then doing that on an individual basis. And it’s often worked out decently for those teams and leagues. More people do tend to pay attention to team, league, or league network digital content if it’s produced by someone reputable who’s already known to them. And for less-covered teams in particular, hiring established people can be a way to get more coverage of what they’re up to.

And it sometimes works out decently for the people who make those moves, too. There’s obviously less independence when it comes to working for a team, but this depends case by case. And there are some ethical questions that come up (the above-linked 2019 Journal of Media Ethics piece on this explores some of that, but does require a subscription),  but a lot of what team-employed people are saying isn’t necessarily hugely different than what they’d be doing at an independent media outlet. And smart teams that go this route allow those employees to be critical when needed, which helps those employees keep credibility as a reasonable source of information on the team. And the Gutierrez hire seems to make sense for both sides; she’ll get to continue doing a lot of what she was doing for NBC Sports Bay Area, particularly spotlighting players, but will just now be doing that at a different venue.

In an ideal world, we would never see anything like this. It’s certainly better on a number of levels to have media coverage of a team originating from talented people who all work for independent outlets. But this world isn’t ideal, and hires like this are worth viewing through that lens. When independent media outlets repeatedly decide to keep cutting talented people who work for them in the name of enhancing corporate bottom lines, it’s certainly good for some of those cut people that teams are interested in bringing them in. And if a partnership like that is done well, there are benefits for fans as well; they can still get information on a team from someone they know and like, that person can still do a good job of covering the team (presuming the team doesn’t get too restrictive with them), and it’s not like that’s the only source of information on teams.

But at the same time, it’s certainly disappointing to see corporations like NBCUniversal (owned by Comcast, which has a market capitalization of more than $261 billion, and which made more than $10 billion in net income last year) repeatedly decide to part ways with talented people. And they’re far from alone, as recent cuts at ESPN, Fox and elsewhere indicate. And many of these cuts aren’t even about going in a different direction; they’re about eliminating positions entirely. And that’s unfortunate to see. In this case, it’s nice to see that the Giants stepped in, and that Gutierrez will be able to continue to cover the team with them. But plenty of cuts lead to talented people leaving sports entirely. And it would certainly be a better world of sports coverage if these giant media corporations weren’t constantly axing talented people in pursuit of a marginally-better bottom line.