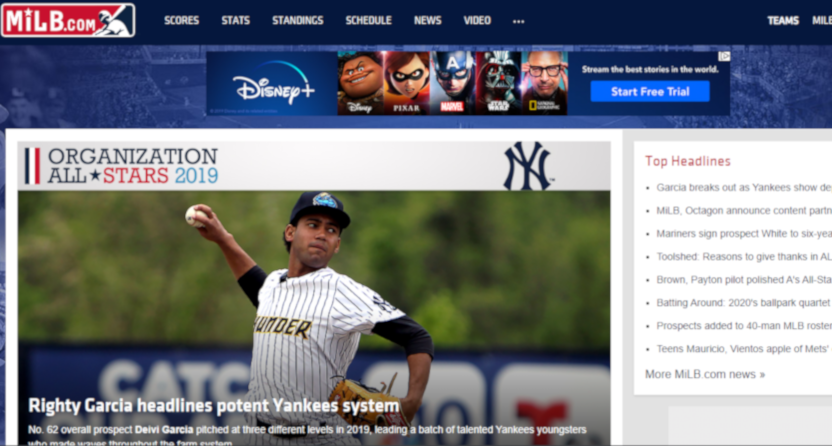 There’s been a lot of recent discussion around Major League Baseball’s plan to eliminate 42 Minor League Baseball teams after the 2020 season, which has even received opposition from presidential candidates like Bernie Sanders. But beyond that, there’s another interesting development with MiLB; they’re looking to take their media rights elsewhere. Those rights currently are sold to TuneIn on the audio side and to MLB (which then puts them on streaming service MiLB.tv) for what John Ourand of Sports Business Journal cites as “a rights fee in the low seven figures,” but that seems set to change, with Ourand reporting that MiLB has now hired sports agency Octagon to shop their rights around elsewhere:

Sources say Minor League Baseball currently gets a rights fee in the low seven figures. Given the number of direct-to-consumer services currently in the market, that fee easily could double, even as Major League Baseball has discussed contracting up to 42 minor league teams.

“The media landscape is moving quickly and evolving by the day,” said David Wright, Minor League Baseball’s chief marketing and commercial officer. “The evolution is providing emerging properties like ours the ability to thrive at levels not seen five or 10 years ago.”

Here’s more from a MiLB release:

Minor League Baseball™ (MiLB™) today announced it has selected Octagon, the leading international sports marketing and media agency, to develop a long-term content, media and distribution strategy for the organization.

“The media landscape is evolving quickly. Content rules the day and serves as the hook to current and next-generation fans,” said David Wright, chief marketing and commercial officer of Minor League Baseball. “We are committed to staying ahead of the content curve and investing in the necessary resources to best position MiLB to drive meaningful fan engagement and overall growth in a hyper-competitive space.”

While MiLB has previously received a rights fee (that low-seven-figure fee mentioned above from MLB and TuneIn) for its content, these rights have never really gone outside for bids. And there’s a lot of content here; the MiLB content currently includes around 6,700 games in 160 U.S. markets, plus shoulder programming. The numbers of games and markets obviously could drop if MLB’s plans to cut down MiLB teams go through, but there would still be a lot left. And the current landscape means there may be plenty of outside companies interested in these rights.

Ourand mentions that MiLB is targeting “streaming companies, telcos, social media companies and regional broadcasters,” and all of those categories make some sense. There are plenty of streaming services out there looking for rights, including network-affiliated ones like ESPN+, B/R Live and NBC Sports Gold (the latter two of which are also affiliated with telecommunications companies, corporate parents AT&T and Comcast respectively), as well as standalone services like DAZN. And while social media companies like Twitter and Facebook are now saying they’re not going to bid big on sports rights, they’ve both done some deals with smaller entities. And as per regional broadcasters, Sinclair plans to tie digital network Stadium in closer to its new regional sports networks, so maybe there are hybrid regional/digital deals to be done there. It’s also notable that there’s so much MiLB content that it could quite possibly be divided up between any number of suitors.

And this isn’t just about what happens to these rights in the U.S., as Ourand notes that MiLB is also looking internationally. There might be some logic there; more than 40 percent of MiLB players come from Spanish-speaking countries, and there’s certainly some international interest in following those players’ careers. Also, there’s a chance that this could lead to larger exposure for MiLB in the U.S. as well; if they strike a deal with a service like ESPN+ or B/R Live that people already subscribe to for other sports, that could put MiLB’s product in front of fans who never would have bought a MiLB.tv subscription.

Overall, this may not happen all that quickly, and MiLB may just re-up with MLB/MiLB.tv for the 2020 season while they figure out something else for 2021 and beyond. But it’s certainly interesting to see MiLB decoupling their media rights from MLB and taking them out to bid with the help of an agency. And it sure seems like a good time for them to do it; we’re in a peak content era with a lot of competing streaming services, and a lot of them are looking to provide sports content. And that may well lead to quite a few bidders for MiLB rights, and could lead to much more money coming into the MiLB coffers. Whether that leads to lessened reductions in teams or to better conditions for players remains to be seen, but there certainly could be more resources headed the league’s way under a better streaming deal.