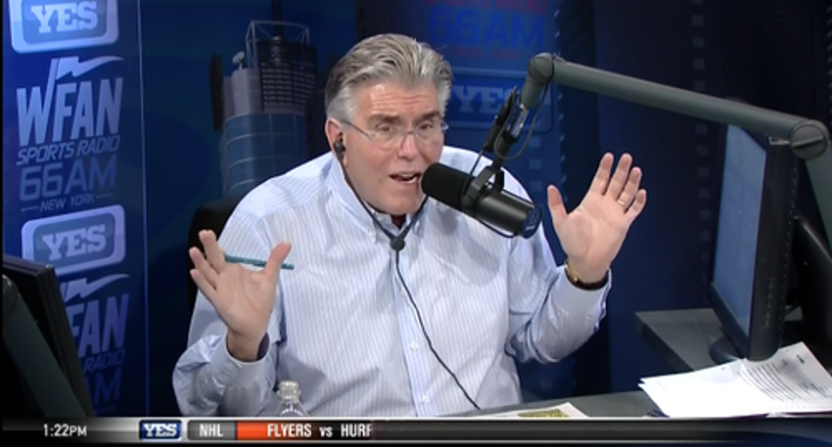 Mike Francesa is weeks away from departing the WFAN show he has hosted for nearly three decades, meaning he’ll soon have some time to kill. Maybe he could fill his retirement by… managing the New York Yankees?

On Monday, a caller asked Francesa whether he could handle Joe Girardi’s former role as Yankees skipper. He took the question quite seriously.

Mike Francesa says he could definitely manage the @Yankees. Unfortunately, they won't hire him. pic.twitter.com/0PdHztXBb8

After Francesa’s comments sparked some buzz, he followed up on the subject Tuesday.

Francesa: If they want me to interview, I’ll do it. I don’t really think about traveling that much these days, but I mean…

Producer: Can you handle the media?

Francesa: Psh, that part, I mean, that would be fun. I would cherish those. I would actually have an extra one every day just so I could do it. I would love those. I would set the standard in those. That wouldn’t be the issue.

Francesa emphasized a little more how much he would enjoy talking to the media, then explained why he’s plenty qualified to manage a Major League team.

The amazing thing is, people think that these jobs are cloaked in mystery. Sports is readily understandable if you apply yourself to it. It’s readily understandable. It’s not like it’s as complicated as people think. But again, I understand I haven’t paid the dues to do it, so it would never happen, but they asked me “do I think I could do it,” I said absolutely. It wasn’t like I said I expected to get the job. I wasn’t expecting a call. But would I do it? Absolutely.

After his producer said the Yankees managerial gig would be a pay cut, Francesa called him a “wise guy” and repeated, “no comment.”

Mike Francesa comments on the buzz he's receiving after saying he could be the @Yankees manager. And yes, he's dead serious about being able to do the job… no problem. pic.twitter.com/yZ242UI2GU

In a way, it’s not at all surprising that Francesa thinks he could manage the Yankees. Who hasn’t watched a manager leave in his starting pitcher too long and shouted at the TV that anyone could do a better job? But as Francesa seems to sort of understand, there’s a little bit more to the job than that. Let’s just say in an era when managers are expected to have an understanding of modern statistical concepts, Mike probably isn’t going to be a top candidate.

Though managing the Yankees could certainly be fun, Francesa will probably have to settle for a slightly less exciting retirement.