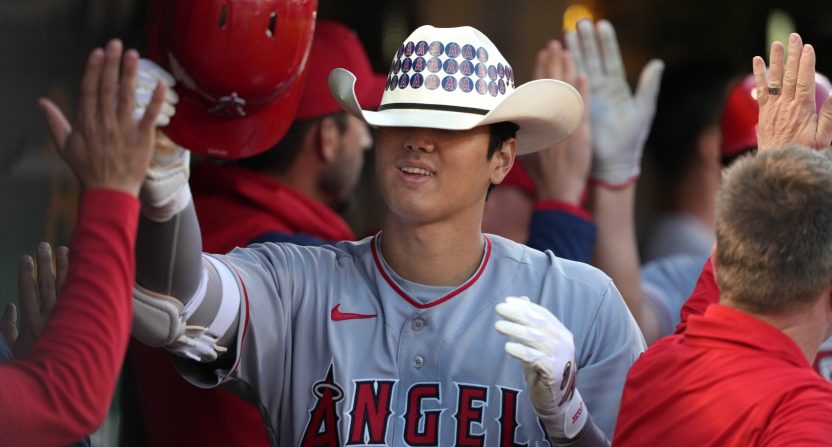 Michele Tafoya isn’t in sports broadcasting anymore, but her comments about the Los Angeles Angels and Shohei Ohtani on Saturday certainly got the sports world talking.

Tafoya, who has described herself as a “pro-choice conservative with libertarian leanings,” made headlines last November when she clashed with the other members of The View during a guest-hosting spot on topics such as Colin Kaepernick, vaccines, and critical race theory. Tafoya has been adamant that her political views and that incident were not factors in why she no longer works in sports broadcasting.

The former Sunday Night Football sideline reporter recently started her post-broadcasting career by co-chairing a Republican campaign for Minnesota gubernatorial candidate Kendall Qualls. She may have been in a bad mood on Saturday because Qualls, once a favorite in the election, officially lost the GOP primary and is out of the governor race.

Perhaps Tafoya, seeking some solace in something simple, dignified, and uniquely American, turned on a baseball game. The Los Angeles Angels and the Oakland Athletics were playing a double-header. The A’s won the first game in thrilling fashion on a walk-off home run. The Angels then dominated the second game with a 9-1 victory to even things out.

Not so, apparently, as Tafoya voiced her concerns on Twitter about the fact that all the Bally Sports West broadcasters seemed to want to do is talk about this Ohtani fellow.

Hey, it’s a free country, right? You can certainly complain about anything you want, especially on social media. We’ve all probably done it.

But we’re not Michele Tafoya, a longtime broadcasting veteran whose voice still carries weight in the industry. And while it’s one thing to complain, openly tagging the Angels organization, Bally Sports West (which has a vested financial interest in the Angels and Ohtani), and Ohtani himself* seems a bit much.

*We should note that @Ohtani is not Shohei’s account and is, instead, just a random person with a deep appreciation for Johannes Vermeer’s works.

A lot of people on Twitter started wondering, why would she be so upset about a focus on Ohtani, a once-in-a-lifetime talent who is dominating the sport like few people in baseball history? Why wouldn’t she want the focus to be on him the same way it might have been for generational talents like Michael Jordan or Tom Brady or Larry Bird? What’s different?

And then it seemed like people started piecing together some of her previous comments and stances with the fact that she was going out of her way to criticize the network’s focus on a Japanese player and, well, it created some interesting reactions.

I agree! More talk about values, and if possible also Troy Glaus.

Indeed. Have no idea why the @Angels broadcasters, broadcasting games involving an Angels player continually doing things never done on a baseball field in 100-plus years, would continually talk about that player. Such an odd broadcasting approach… https://t.co/d28RDw0m8L

This has gotta be one of the worst tweets of all time lmao https://t.co/xW3qmvh8wy

Something tells me you didn't complain about all of the Brett Favre and Tim Tebow chatter on NFL broadcasts. https://t.co/Av74lEW0Zs

I have known this person a long time – and her cheese has fully slid off her cracker.

Sorry I ever helped your career. Congrats on living a lie all this time. https://t.co/fIh28Sfosq

She quit one of the best jobs in media to do this conservative media grift. Michele is playing for the love of the game https://t.co/NN6vmyzhLB

??? I won’t be expecting a Michele Tafoya follow anytime soon

I wonder why someone would want a home broadcast to talk less about the best player in baseball, who plays on their team.

Like, what could it POSSIBLY be about him? https://t.co/HL0N0Deams

Bally Sports West broadcasters Mark Gubicza and Patrick O’Neal also jumped into the fray, though in a much more low-key manner.

Just here for the comments ?

Meanwhile, Ohtani continues to be an absolute superstar worthy of all the attention and discussion he receives, especially during Angels broadcasts. We’re guessing that viewers will continue hearing a bit more about him during the upcoming season, much to Michele’s chagrin.