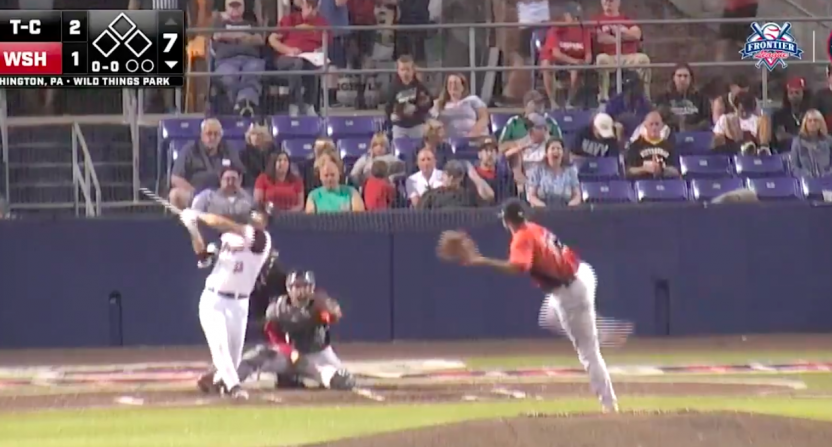 Castellanos has become the patron saint of the awkward and/or somber home run, the most infamous of which was Thom Brennaman’s call in the middle of trying to apologize for saying a homophobic slur, creating one of the most surreal calls ever heard on a broadcast.

no way did this just happen, this is not real pic.twitter.com/6ou1BkAhYW

Then, it happened again when Bally Sports Kansas City broadcaster Ryan Lefebvre was eulogizing George A. Gorman, the father of longtime Royals equipment manager Pat Gorman, as Castellanos smacked a homer into the left-field seats.

The lesson that everyone took from these two events was that you should never, ever say anything that requires a bit of heartfelt gravitas during a broadcast when Nick Castellanos is at-bat. However, that lesson does not appear to have been specific enough.

In Frontier League action on Saturday night, the Washington Wild Things were taking on the Tri-City ValleyCats when play-by-play announcer Kyle Dawson decided to pay tribute to his uncle Charlie, who had recently passed away. Perhaps aware of the way he was tempting fate, Dawson launched into the eulogy during mid-inning warmups.

However, as he continued on, play got underway and Wild Things slugger Grant Heyman stepped to the plate. While still in the midst of his eulogy, Dawson says “hope we don’t get Nick Castellanos’d and someone hits a home run to tie the game right now.”

You know what happens next.

Thanks for the moment, Uncle Charlie. Love you. pic.twitter.com/yfRiPHMao6

Here’s a transcript of Dawson’s speech surrounding the surreal moment:

“…I’ve been out of work all week. You probably don’t know that because I’m still on the headset and have been every night this week. But I’ve been in and out of work all week, I’ve been late, trying to do stuff at 3 in the morning trying to get caught up so I could be with family all week. And some may say…some people even in this organization have said I shouldn’t be here at all, especially the last three days’ worth of funerals. But I would argue that I need to be here. This is gonna take longer than I intended it to, but that’s okay. I’m just gonna give you these visuals and hope we don’t get Nick Castellanos’d and someone hits a home run to tie the game right now.

“Of course. My goodness. I’m just gonna come back to it in a second. Grant Heyman has just tied the ballgame. Oh, that’s gonna put a wrench in my whole thing. But I love it. I needed this. I told the family today when I walked out, I need them to win tonight. So it’s kinda a perfect time.”

The whole thing is actually pretty sweet and endearing. In fact, it felt a bit like the antithesis of the Brennaman call. And if this is something that’s going to keep happening to unsuspecting broadcasters trying to be earnest, we can all hope that this is the future of being “Castellanos’d.”