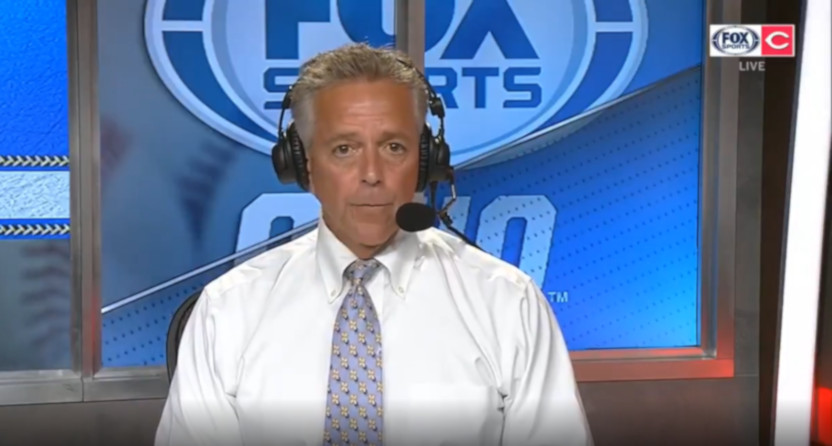 Most people who have spent any time on Twitter over the last year have seen others using Thom Brennaman’s apology for a hot-mic homophobic slur, which he interrupted to call a home run as a recurring meme. Just about any seemingly-serious topic can be interrupted with some version of “I pride myself and think of myself as a man of faith, as there’s a drive into deep left field by Castellanos and that’ll be a home run.” And The Ringer’s Ben Lindbergh, who has done an excellent job on deep dives into everything from the distance of the pitching mound to The Mandalorian to juiced balls, now has a very thorough look at the Castellanos meme, complete with this graph provided by Twitter analytics company Vicinatas: 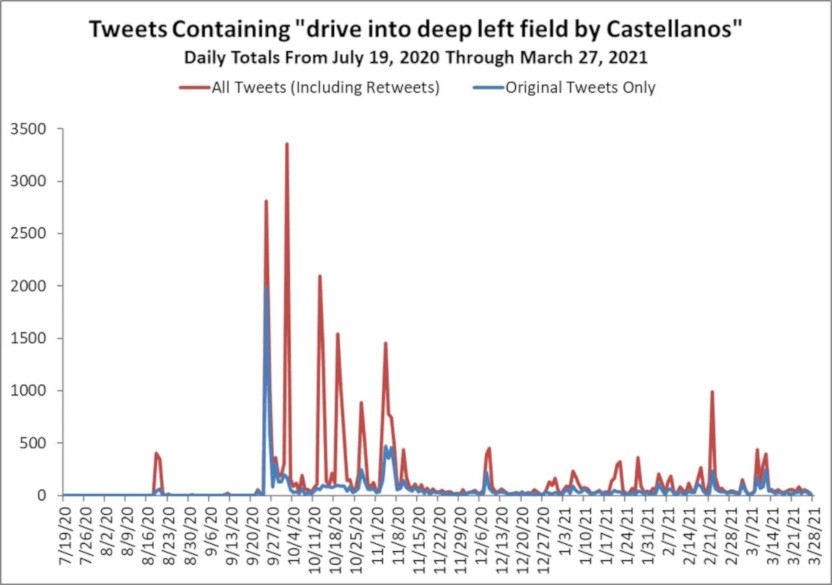 What’s really amazing there is that the largest spikes weren’t when Brennaman did this on August 19, 2020, or around him offering a lame and partial apology a day later, or around him being pulled off of Fox NFL broadcasts (also a day later). Rather, the big spikes came a month later when Brennaman officially resigned from Reds’ work, and when the Reds put out an easily-mockable statement saying that Brennaman wouldn’t return to their booth:

That statement saw a lot of copy-paste Brennaman memes in response, as the spikes on the above graph indicate. And they have continued since then. Lindbergh also got some great quotes from various sportswriters and personalities on why they’ve used this meme; here are some of those.

The mid-apology play-by-play, ESPN’s Pablo Torre says, “was like listening to the band play on as the Titanic was sinking. Except the band was also somehow the iceberg.”

…“Watching Thom Brennaman break the fourth wall and then suddenly reconstruct that wall, in the same breath, remains one of the funniest things I have ever seen,” Torre says.

…“It’s kind of like this decade’s Rickroll,” says journalist Jen Mac Ramos, one of the foremost copypasta practitioners.

…“When it became a meme was when there was a lot of stuff in politics going on, a lot of statements diminishing COVID-19,” Ramos says. “So everyone was just like, ‘That’s a bad statement just like Thom Brennaman’s statement. I’m going to put the copypasta on it.’”

…Sports Illustrated writer Emma Baccellieri dropped the Brennaman bomb in a tweet inspired by New Yorker writer and CNN legal analyst Jeffrey Toobin’s apology for his “Zoom Dick” disgrace. Baccellieri had doubts about sending her contribution to the Castellanos corpus, because the meme was in no-(Brenna)man’s-land: not new, but not quite established enough to qualify as a classic. But the temptation to tweet was too strong. “It was honestly the first thing I thought of when I saw the Toobin apology, and it was just so funny to me, I had to do it,” she says, also via DM. Thousands of readers were glad she did. “I very much believe it’s earned a spot as [a classic meme] and will live on forever, at least in the vernacular of Weird Baseball Twitter,” Baccellieri adds.

Lindbergh’s full piece is well worth a read, and it’s an excellent examination of how these comments from Brennaman wound up becoming such a key part of baseball Twitter. And the stats are particularly interesting as a look into how this really became a thing well after the initial comments. As for Brennaman himself, he wound up calling the Roberto Clemente League in Puerto Rico this winter. But the meme may be what he’s more known for for the moment.